“Gravel Pit” is a single released by the Wu-Tang Clan taken from their album The W.

The chorus of the song: “Back, back and forth and forth…” is taken from the funk group Cameo’s single “Back And Forth”. The hook of the song: “Check out my gravel pit…” is sung by Paulissa Moorman. The song features verses from three of the Wu-Tang Clan’s MCs, Method Man, Ghostface Killah and U-God, as well as spoken bits from RZA and Raekwon.

The music video, directed by Joseph Kahn, features the Wu-Tang Clan arguing in their time machine, and in argument accidentally sending themselves back to “2,000,000 BC”, which bears strong resemblance to the representation of the Stone Age in The Flintstones. The “gravel pit” is a large, fancy pit made from stone and bones. The “pit”, apparently a casino, contains a fountain, stone age cars, dancing women – including the actress Tamala Jones, credited as “Crystal Diamonds” – and large dinosaurs. It appears to be ruled by the Wu-Tang Clan (with the exception of Ol’ Dirty Bastard, who was incarcerated at the time – he “appears” as a pair of enchained arms hanging out of a makeshift jail cell), who now have “stone age” personas and clothing. At the end of the video “Bo Rockhard” (Bokeem Woodbine), a rival ninja challenges the Wu-Tang ninjas, RZA leads ninjas and fights off a horde of rival ninjas attacking the pit. The track’s opening soundbite (as well as many found on the album) comes from the movie Short Eyes.

The song uses two samples. The trumpet introduction comes from “It’s a Man’s Man’s Man’s World” by James Brown, while the sample running along the whole song is taken from the French TV miniseries Belphegor’s main titles. It also took samples from the films Enter the Dragon and Short Eyes. (Wikipedia) 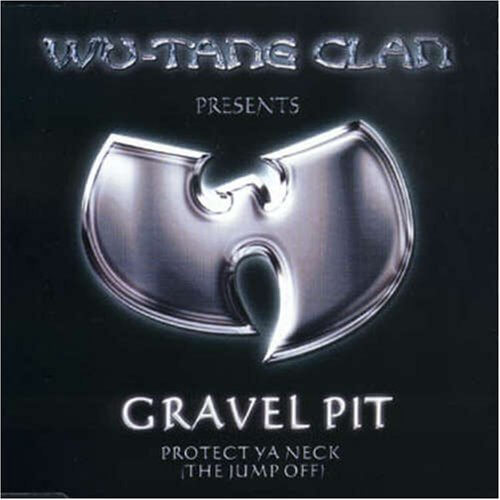