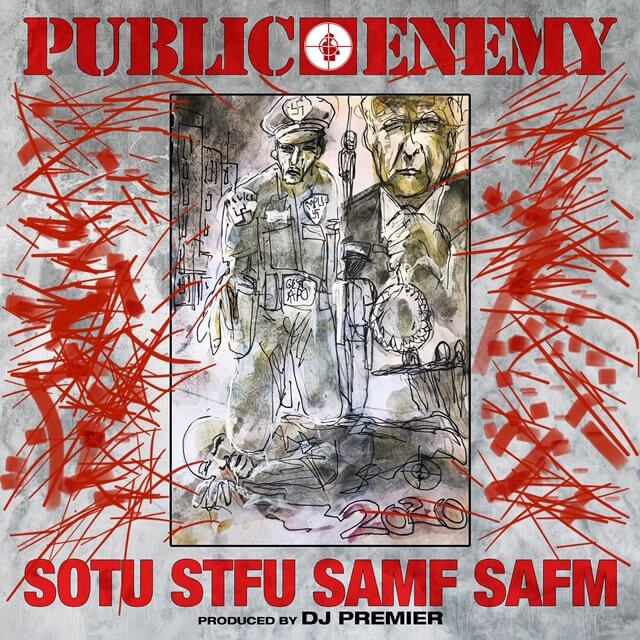 Public Enemy are back with a new single and video, “State Of The Union (STFU),” a fiery return to the frontlines as they take on Donald Trump and his fascist regime.  PE is giving away the track to fans for free at www.publicenemy.com starting today.  The new single is also now available to stream on all major DSP’s worldwide.  “State Of The Union (STFU)” is produced by DJ Premier.

An unflinching statement about the destruction the current administration has unleashed on the country and its people, “State Of The Union (STFU)” speaks truth to power while urging people to fight against racism, injustice, and oppression with their vote.

It’s the latest in a string of powerful messages about Trump from PE frontman, Chuck D, who has addressed Trump’s policies and rhetoric for the past several years through his work with Prophets Of Rage and as a solo artist.  “Our collective voices keep getting louder.  The rest of the planet is on our side.  But it’s not enough to talk about change.  You have to show up and demand change,” says Chuck D.  “Folks gotta vote like their lives depend on it, cause it does.”  “Public Enemy tells it like it is,” added Flava Flav.  “It’s time for him to GO.”

Stream Public Enemy’s “State Of The Union (STFU)” at your preferred DSP: https://ingroov.es/state-of-the-union

One response to “Public Enemy Returns With Explosive New Single & Video “State Of The Union (STFU)” Prod. By DJ Premier”