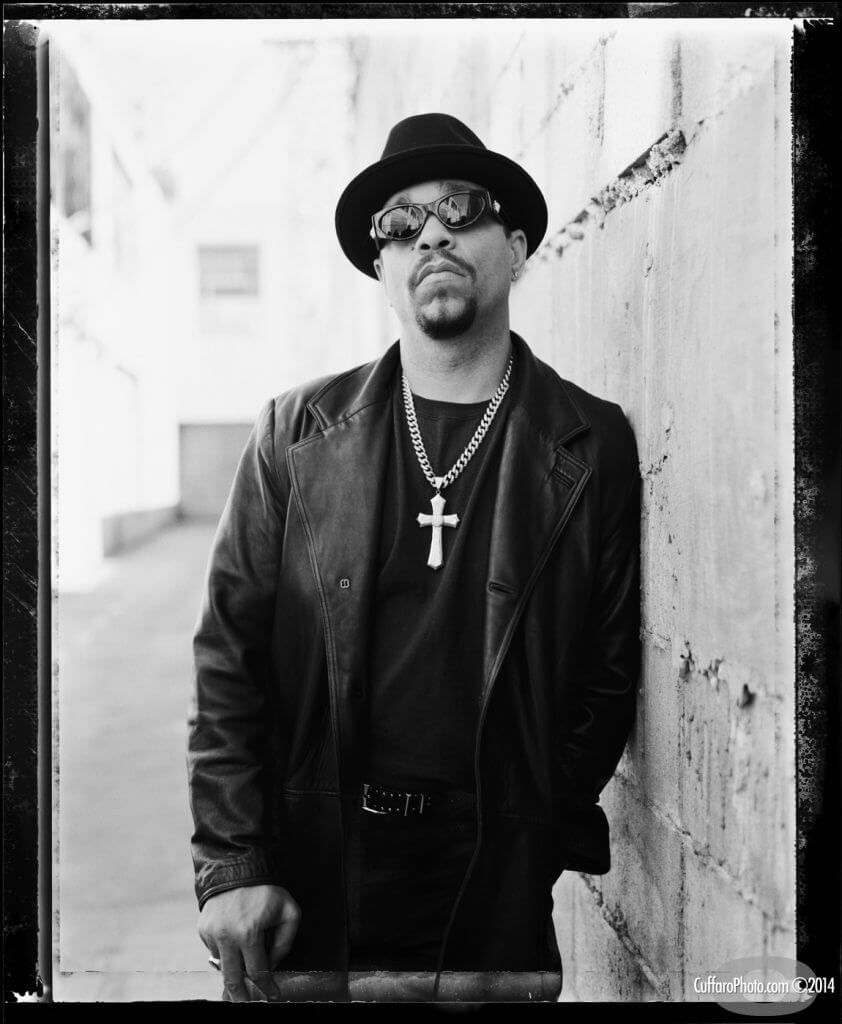 In the year 1991, Hip Hop was entering a new era as the decade shifted and the world got a little bit older. While a new wave of emcees was on the rise, some artists from the 80’s weren’t all able to maintain their dominance as a new generation began to reveal itself. No longer pioneers but children of the OG’s now finally maturing and ready to give their perspective.

One emcee from the 80’s continued his streak of both controversial and influential music well into the 90’s, keeping Hip Hop grounded, a constant reminder of the roots and importance of the cultural movement. The Original Gangster is Ice-T, one of the most prolific individuals to ever get behind a microphone. 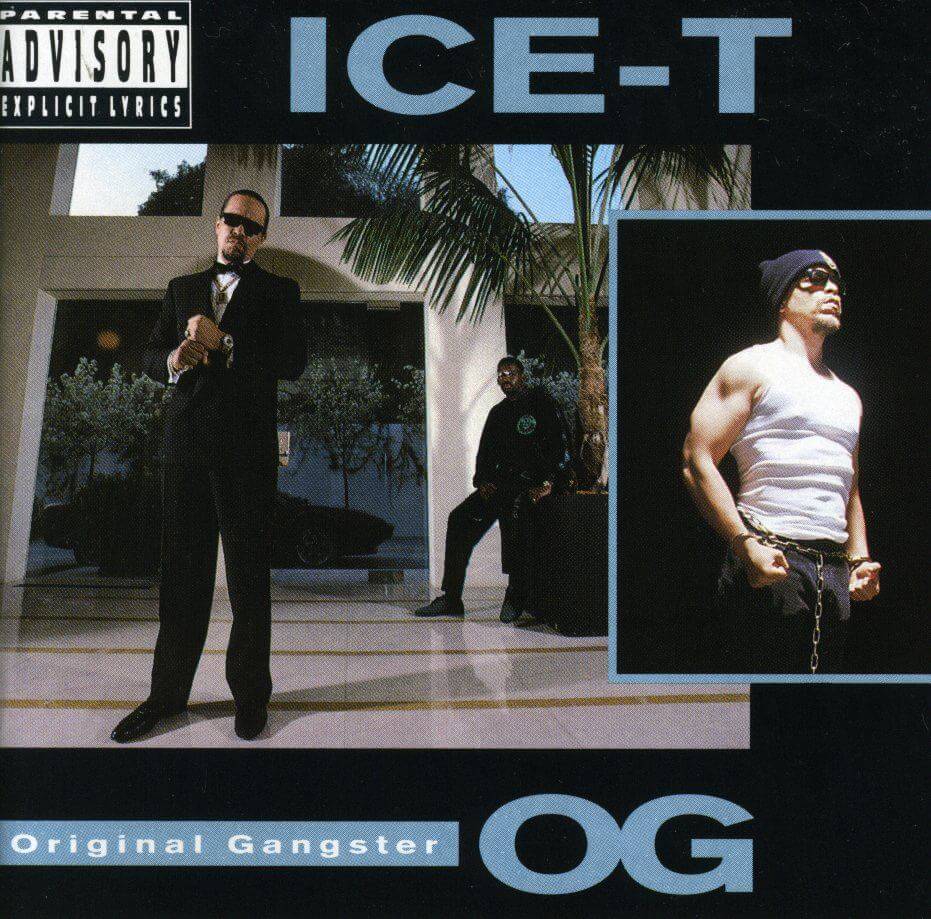 The tenth track from Ice T’s fourth studio album tells the story of how he developed his sound by keeping it real with himself.

[Verse 1]
Ten years ago
I used to listen to rappers flow
Talkin’ bout the way
They rocked the mic at the disco
I liked how that s*** was goin’ down
Dreamt about ripping the mic with my own sound
So I tried to write rhymes
Something like them, my boys said
“That ain’t you Ice
That s*** sounds like them.”
So I sat back, thought up a new track
Didn’t fantasize, kicked the pure
Facts. Motherfuckers got scared
Cause they was unprepared
Who would tell it how it really was?
Who dared?
A m*********** from the West Coast
L.A. South Central fool
Where the Crips and the Bloods play
When I wrote about parties
It didn’t fit
Six in the Morning
That was the real s***

Ice T was far from the South Bronx, but the music that they were making in New York inspired him to express himself. The west coast had not established itself in Hip Hop just yet but by 1983 Ice T released his first single, The Coldest Rap. As Ice T recalls in the song, this wasn’t who he was and listening to The Coldest Rap one can easily hear the similarity to east coast acts like Grandmaster Flash and the Furious Five. Ice T, actually living up to the lexicon, kept it real and started making songs that reflected his life instead of trying to fit into any previously established formula of success.

This moment cemented Ice T as an OG, but what exactly is meant by the term? It has now spread far and wide throughout pop culture, repurposed into many distinct niches throughout the 25 years since Ice T released the song. The term is said to have evolved from slang used by members of the Los Angeles Crips during the early 70’s. According to two death row prisoners in San Quentin State Prison, the letters O.G. were most commonly used in written form to put emphasis on a name or address to show who they are and establish themselves as worthy of respect. As the connotation of the word elevated and became more widely used, its influence spread and many worked to gain recognition as an O.G. in their own right. 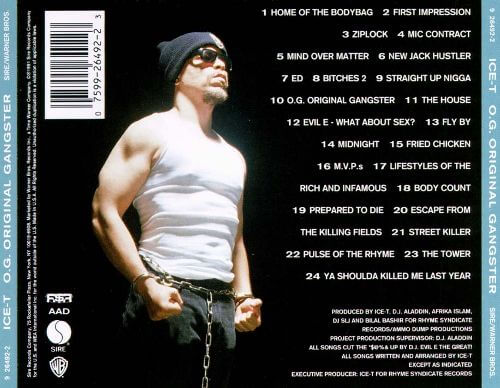 In high school Ice T, while not an actual gang member, quickly become more noticeably affiliated with the Crips than the rival gang, the Bloods. This is likely to be how Ice T became familiar with the term and possibly what led to him striving for recognition. As a pioneer of west coast Hip Hop, today few would question his title as Original Gangster.

[Verse 2]
When I wrote about parties
Someone always died
When I tried to write happy
Yo I knew I lied, I lived a life of crime
Why play ya blind?
A simple look
And anyone with two cents
Would know I’m
A hardcore player from the streets
Rapping bout hardcore topics
Over hardcore drum beats
A little different
Than the average though
Jet you through the fast lane
Drop ya on death row
Cause anybody who’s been there
Knows that life ain’t so lovely
On the blood-soaked fast track
That invincible s*** don’t work
Throw ya in a joint
You’ll be coming out feet first
So I blast the mic with my style
Sometimes I’m ill
And other times buck wild
But the science is always there
I’d be a true sucker
If I acted like I didn’t care
I rap for brothers just like myself
Dazed by the game
In a quest for extreme wealth
But I kick it to you hard and real
One wrong move, and you caps peeled
I ain’t no super hero
I ain’t no marvel comic
But when it comes to game I’m atomic
At dropping it straight
Point blank and untwisted
No imagination needed, cause I lived it
This ain’t no f****** joke
This s*** is real to me
I’m Ice-T, O.G.

As a storyteller, Ice T says what he means and means what he says, not hiding or burying deep message in metaphor or analogy but coming right out and speaking his truth. There’s no fronting in his songs; Ice T kept his heart on his sleeve to show an earnest emotional lyricism and crystal clear flow. When listening to an Ice T track, there is no interpretation or pondering on what his point could be, Ice T emcees candidly so that there can be no confusion in what message he wants to convey.

The story of a young man growing up surrounded by and partaking in crime as a means to gain an edge in a cruel world is one not often told. His role as an oral historian of sorts gave way to a different kind of rapping as well as the rise of the west coast perspective on Hip Hop. Permanently engraving the letters O.G. next to his name in the eyes and minds of all those who hold Hip Hop dear. 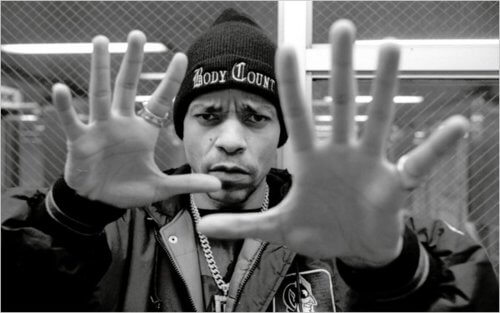