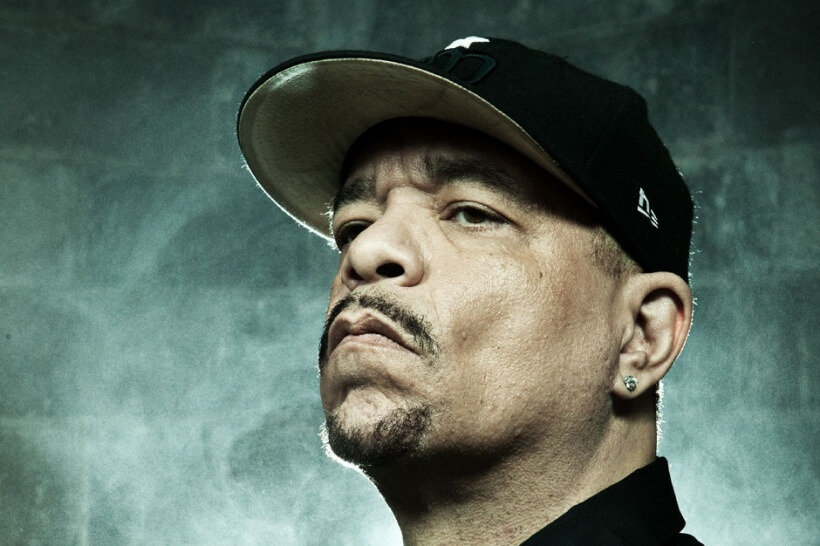 The legendary Ice-T is known as one of the most dangerous people in music history, an essential pioneer of both gangsta rap and rapcore. His debut album, Rhyme Pays, was the first Hip Hop album to have a parental advisory label for explicit lyrics. He also formed Body Count, the first big rap-metal group, whose success and controversy paved the way for bands such as Rage Against the Machine and Linkin Park. Ice has made songs that have influenced rappers everywhere from Biggie to Eminem, and have even invited comments from former presidents and other major politicians. Throughout his career, Ice has personified the rebellious roots of Hip Hop and has continued his work to this very day. Here are 10 of his essential tracks:

“99 Problems” ft. Brother Marquis, prod. by DJ Aladdin, Ice-T, and SLJ. (Home Invasion, 1993). Not too many young Hip Hop fans know this nowadays, but Jay-Z’s famous hook “If you’re having girl problems I feel bad for you to son/I got 99 problems but a bitch ain’t one, hit me” was NOT written by Jay himself. In fact, Ice-T heard a friend say this line and used it on the hook for this very track. Over an urgent beat, Ice talks about all the hoes in his life, some with asses as big as TV sets and others who come fresh off of Soul Train. Being the infamous icon he is, Ice has many problems, including dealing with cops and paying his rent, but having multiple women is definitely not one of them. Although Jay would take the concept to greater effect years later, the original track is still dope.

“You Played Yourself” prod. by Afrika Islam and Ice-T (The Iceberg/Freedom of Speech…Just Watch What You Say): Seymour Stein, the famous record executive who initially signed Ice, called him “the Bob Dylan of Hip Hop”, and with good reason. Although Ice was an icon of gangsta rap, he used his status to warn common folks against throwing their lives away and to tell fake wannabes to back off of a lifestyle that was not made for them. “You Played Yourself” certainly achieves these goals. The beat, sampled from James Brown’s “The Boss”, is fresh and smooth, but the message is harsh. Ice lectures a wannabe famous rapper who is coming up in the world, a person who acts like they know the streets but does not have the smarts to survive. This guy spends all his money to date a freak, but when he runs out of money, she’s out the door. He becomes slightly famous but treats his fans and friends like sh*t, and then both of them leave him. Down on his luck, he borrows money from family and spends it all on drugs. Then he tries to pull off an armed robbery and ends up in jail. All the while, Ice warns him that it is not society’s fault or the fault of the people around him, but his own. He played himself. An essential cautionary tale.

“Body Count” with Body Count (O.G. Original Gangster, 1991; Body Count, 1992): it is hard to imagine now, but rap and hard rock were not always an acclaimed combination. In fact, as Ice states in the intro to this song, some thought he sold out when he started hybridizing the genres with Body Count. But the mix of musical styles works well. At the time this song came out, Body Count was so well-known that they played at Lollapalooza, and Rage Against the Machine opened for them at many concerts. This song and its album are known now for making rapcore and rap-rock popular music genres and established Ice as an innovative force in the music world.

“New Jack Hustler” (Nino’s Theme)” prod. by DJ Aladdin and Ice-T (O.G. Original Gangster, 1991): As proved with the film Colors just a few years prior, Ice-T knew how to make a dope record for a movie. This track was written for New Jack City, which starred Wesley Snipes and Ice himself. It is a slick song in which Ice takes the view of the movie’s main character, a powerful drug dealer. Ice’s lyrics make for a detailed view of the life of a gangster, including the lavish lifestyle. However, he points out that the lifestyle comes at a price: “With cocaine, my success came speedy/Got me twisted jammed into a paradox/Every dollar I get, another brother drops”. The gangster asks “Is this a nightmare? Or the American dream?” but also states “But since I don’t know, and I ain’t never learned/I gotta get paid, I got money to earn”. Ice may have been famous for being a gangsta rapper, but he also showed the dark side of the lifestyle in many of his songs.

“High Rollers” produced by Afrika Islam and Ice-T (Power, 1988): “High Rollers” serves as another cautionary tale for those looking to join the street life. Through sharp rhymes and flow, Ice describes high rollers and tells of their powerful lifestyle. However, near the end of the song, Ice states that the life of a high roller is cool, but there is danger underneath it as well. As a result, it is important to make life choices carefully. And if you do choose this life, do not get cocky, or you will “end up with a bullet in your head”. This is one of Ice’s hottest songs, with a sick beat and some of Ice’s best lines (“Speed of life, fast/It’s like walking barefoot over broken glass/It’s like jump-rope with a razor blade”).

“O.G. Original Gangster” prod. by DJ Aladdin, SLJ, and Ice-T. O.G. Original Gangster is generally considered to be Ice’s best album and a full-fledged masterwork of the gangster rap genre. The title track serves as an autobiography for Ice, who dubs himself the “original gangster”. With the amount of influence he has to his name, it is not a far-fetched claim. Ice describes how he started to write rhymes after listening to his favorite rappers and ditched his initial party records to write stories about life on the streets. Ice was among the first big rappers to talk about life on the streets, especially in a time when many Hip  Hop records were party songs. This song still remains one of the freshest off of one of the most acclaimed Hip Hop records of its time.

“I’m Your Pusher/Pusherman” produced by Afrika Islam and Ice-T (Power, 1988): One characteristic that has always separated Ice from other hardcore rappers is that he never sold drugs before becoming a rapper and never encouraged others to use or sell them. In the midst of the crack epidemic, Ice stood as an advocate for staying straight. To prove it, he made this track. Ice calls out a junkie for coming to him to get drugs and tells him to listen to good tunes instead to get his fix. The track samples “Pusherman” by Curtis Mayfield and establishes Ice-T as a pusher not of dope, but of music. This is a far cry from many Hip Hop songs in which former drug dealers like Biggie and Jay-Z reminisce on their days selling crack. This song is also essential for the LL Cool J diss that was part of the temporary beef between LL and Ice. While the beef never got as big as Boogie Down vs. the Juice Crew or even LL versus Kool Moe Dee, it marks an interesting point in the careers of both of these great rappers.

“Colors” produced by Afrika Islam and Ice-T (Colors Soundtrack, 1988): Written for Dennis Hopper’s film Colors, this is probably Ice’s most well-known song. The movie concerns gang violence in L.A., a subject Ice was rather knowledgeable about, having risen to fame in that area. In the track, Ice takes the view of an L.A. gangster, either a red or a blue, who lives and fights for his color. However, as dedicated as he is to the lifestyle, he warns others against joining gangs and participating in the senseless violence. The song was acclaimed by many, and VH1 named it one of the best Hip Hop songs of all time. It is certainly one of the more underrated classics of the genre, a rare example of a gangster rap song that warns against the sheer violence of the lifestyle.

“Cop Killer” with Body Count (Single, 1991): N.W.A. became notorious for making “F**k Tha Police” back in the 80s, which led to them getting a personal warning letter from the FBI, but even that song did not compare to the crazy impact that “Cop Killer” had when released. The song is a protest record told from the view of a psychopath who has had enough of his black friends getting unnecessarily beaten and killed by cops (like Rodney King) and is deciding to do something about it. He dons black clothes and goes on a cop-killing rampage. Because of the first-person view of the song, many thought that Ice himself advocated killing cops, which led many to protest the song and withdraw copies of the Body Count album from music stores. Law enforcement organizations, investors in Warner Brothers Records, Al Gore’s wife, and even former President George H.W. Bush and his vice president protested against the release of this song. This shows the incredible power of Ice-T, a man who could stir up such major controversy from one song. The famous irony is that Ice did play a cop on New Jack City and now plays a cop on Law and Order: SVU. None of this lessens the impact of this record, which came out in the midst of the Rodney King controversy and remains relevant. This will always remain one of the Ice’s most important songs.

“6 N’ the Mornin’” produced by Afrika Islam and Ice-T (Rhyme Pays, 1987): This is it. This is the song that put Ice on the map as an important force in Hip Hop. Modeled after the sparse beats and storytelling style of Schoolly D’s ”P.S.K. (What Does it Mean?)”, Ice spins a tale of the life of a gangster on the streets of L.A., which includes running from cops, shooting dice with friends, spending time with his girl, and fighting in shootouts. This song was massively influential and helped spawn gangsta rap as a legitimate genre of music, influencing rappers from Tupac to Killer Mike. The classic line opening line “6 n’ the mornin’, police at my door” would be sampled by many artists in following generations, including Kendrick Lamar, who quoted it in “The Blacker the Berry”. This track helped lead to the success of Ice’s debut Rhyme Pays and establish him as an essential rapper for many albums after. Although Ice may not be as well known in the current generation for his stance in Hip Hop culture, his influence is impossible to escape.