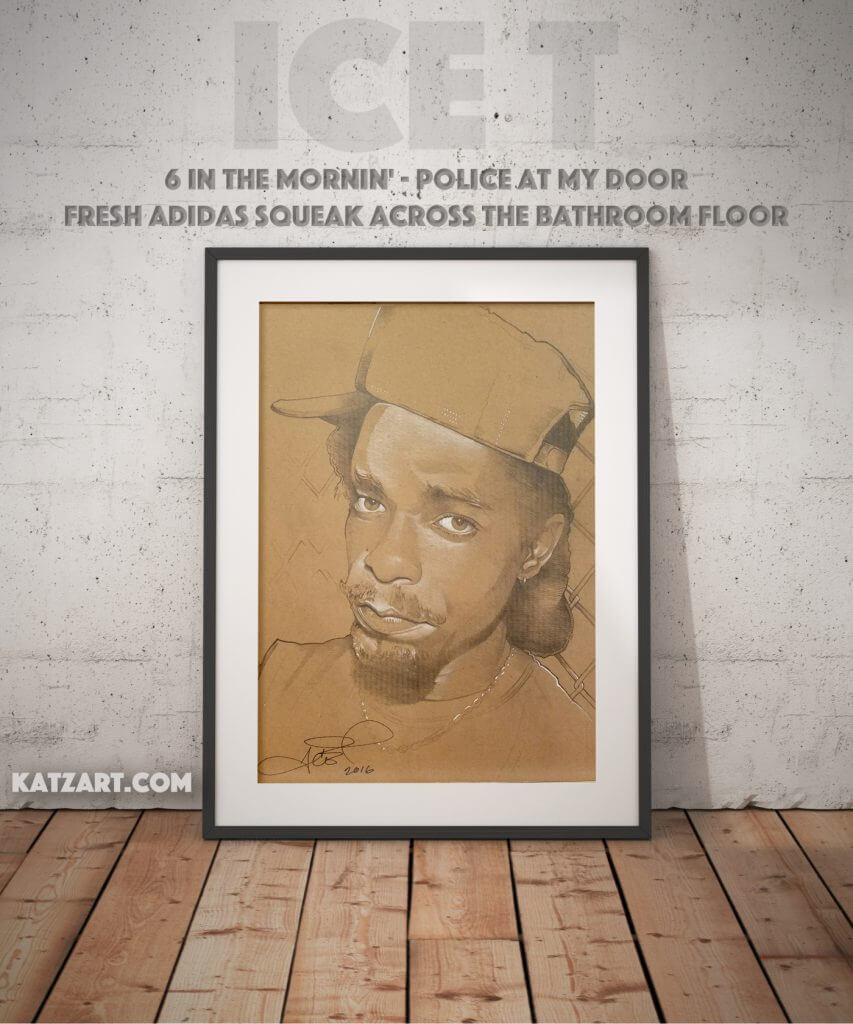 This past summer, I decided to generate a list of all of the musical events I wanted to attend. I circled a few all-important dates on the calendar, and I set to work. I didn’t want to show up empty-handed, and I wanted to take full advantage of the opportunities coming my way.

July 29th loomed large, as this was the day the Art of Rap Festival was coming to the east coast. The line-up had my head spinning, and included Public Enemy, Ice T, EPMD, Sugar Hill Gang, Melle Mel and Scorpio, Naughty by Nature, Mobb Deep, Smiff and Wesson, and Kurtis Blow. I had plenty of lead time, and crafted a list of new artwork that I intended to bring along.

My meeting goals included EPMD (Parish Smith and Erick Sermon), Chuck D, and my first chance to meet Ice T. I carefully rendered each new piece, and gathered up my Glen E. Friedman tome – My Rules. I was more than ready with my Madina Design Golden Era poster, the new cardboard compositions, and a quiver of Sharpie markers. I just needed to get up to the Ford Amphitheater in Coney Island, NY. My path was clear, and the weather was perfect. 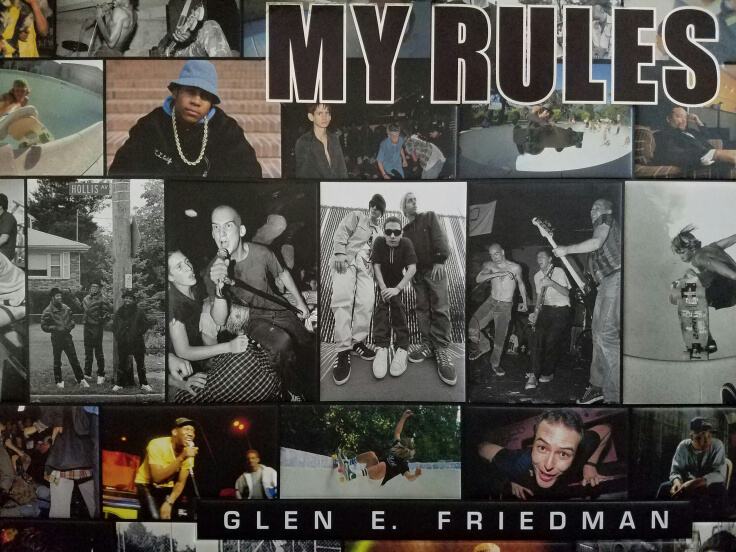 About a three hour drive from home, Coney Island is a destination that I’ve passed about a hundred times, but I’ve never made time to visit. Seeing the defunct and iconic Parachute Jump structure from a distance always seemed to evoke strong memories from my parent’s past. I was overcome with a mysterious nostalgia as I approached this storied destination. As usual, I was unnecessarily early for the show, so I decided to take in the requisite tourist traps – Nathan’s Hot Dogs, The Boardwalk, and Key Bank Park. As the son of a Brooklynite and a Brooklyn Dodger fan, I was grateful to see the Jackie Robinson and Pee Wee Reese sculpture that graces the entry to the ballpark. I felt that it was a sign that I was in the right place at the right time.

As I ventured toward the boardwalk to find some grub, I wandered past a few rollercoasters. I was struck by the juxtaposition of the amusement park atmosphere, and the backdrop of older tenement buildings. It was decidedly New York. Lost in my thoughts, I glanced up to to get my bearings, and staring me in the face was the Eric Haze MCA mural, recently completed for the Coney Island Walls initiative. Now I knew – I was in the right place, at the right time; another sign.

As ‘game time’ neared, I moved closer to the venue. I struck up a few conversations, and tried to pace my obvious enthusiasm for the upcoming show. I was fortunate to obtain an ‘all-access’ wristband from a secret source, and I weaved through the backstage hallways towards an elevator that advertised ‘second floor dressing rooms’. I entered the small box uninterrupted, and collected myself, as I realized that I’d soon be amidst some of the greatest names in Hip Hop. 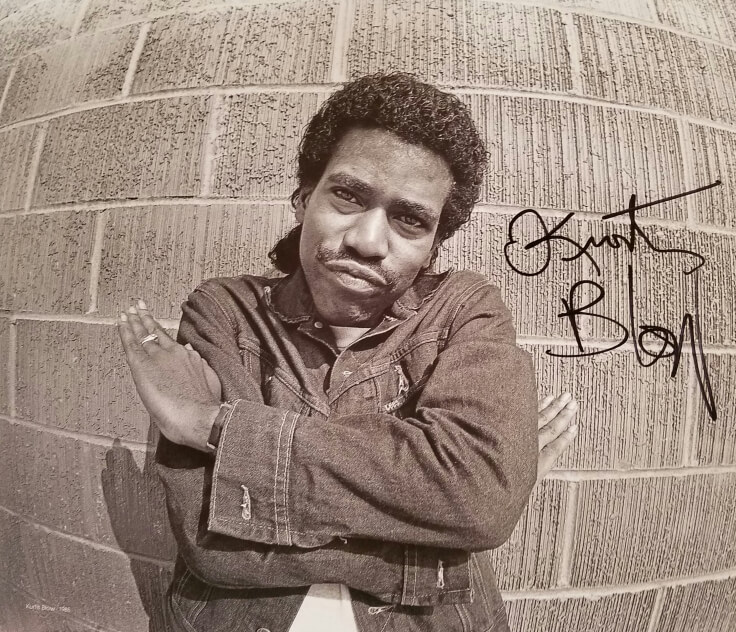 Kurtis Blow – Photo by Glen E. Friedman (from the My Rules book)

When you’re backstage at a show, it can be a long wait.  I always enjoy meeting the people who make the machine work. There are security guards, tour managers, fans, family, and talent all intermingling as the vibe rises to a fever pitch. In this case, there were so many icons under one roof, that the hallways were filled with hugs and shouts of recognition. Turn one way, and there is Treach from Naughty By Nature. Turn the other way, and here comes Parish Smith from EPMD. I was but a fly on the wall, armed with my folder of art, and a collection of pens.

The ebb and flow of the hallway was controlled by Mick Benzo and the Chief Rocker: Busy Bee. He was the Master of Ceremony for the night, and he was running back and forth from the stage to the backstage hallway. He was working diligently to get people on stage in a timely manner.

As I looked down the long hallway, I spotted Mr. Chuck D from Public Enemy. He dutifully and sincerely stopped to greet everyone who met his gaze. Each person in the hallway seemed to pay tribute to the man. When he got close, he stopped in front of me, and said “AK, what have you got this time?”. I pulled out my most recent drawing, and he surprised me by introducing me to the small crowd of people. I had used a Glen E. Friedman photo as reference image, and I was thrilled to get this new ‘Black Steel’ composition in front of the legend that uttered the words – “I GOT A LETTER FROM THE GOVERNMENT…”.  In fact, that was my plan. I wanted to ask if he’d tag those lyrics on my work. My drawing was inspired by a photograph that was taken during the video shoot for ‘Black Steel in the Hour of Chaos’. To have those lyrics added to my composition, was to collaborate with Hip Hop history. Mr. Chuck delivered. He enthusiastically and graciously added the first bars of the song. I could hear people reacting in disbelief, as the collaboration was completed. Unreal. 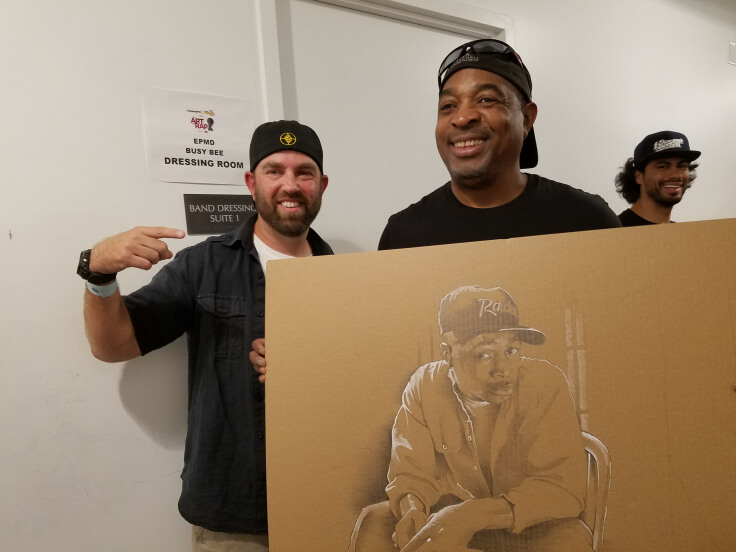 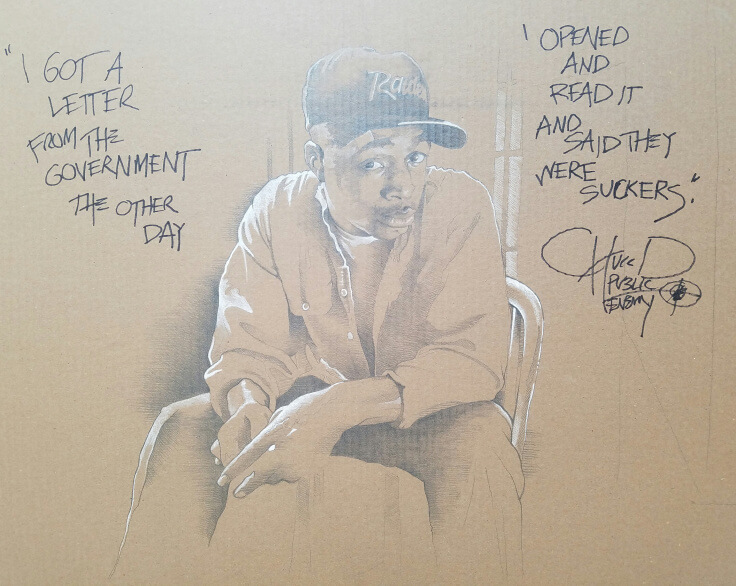 ‘Black Steel in the Hour of Chaos’ by Andy Katz and Chuck D – 24″ x 36″ – graphite and white charcoal on cardboard – reference photo by Glen E. Friedman

While that may seem impossible to top, my work and wait was not over. While Public Enemy readied themselves for their performance, I set my sights on connecting with EPMD. Just then, Erick Sermon arrived. As he approached the door to his dressing room, I propped up the new artwork. He smiled, and gestured for me to go into the crowded room with him. I met his son, and a few other people, as he agreed to sign the art. It was another highlight from a great night. 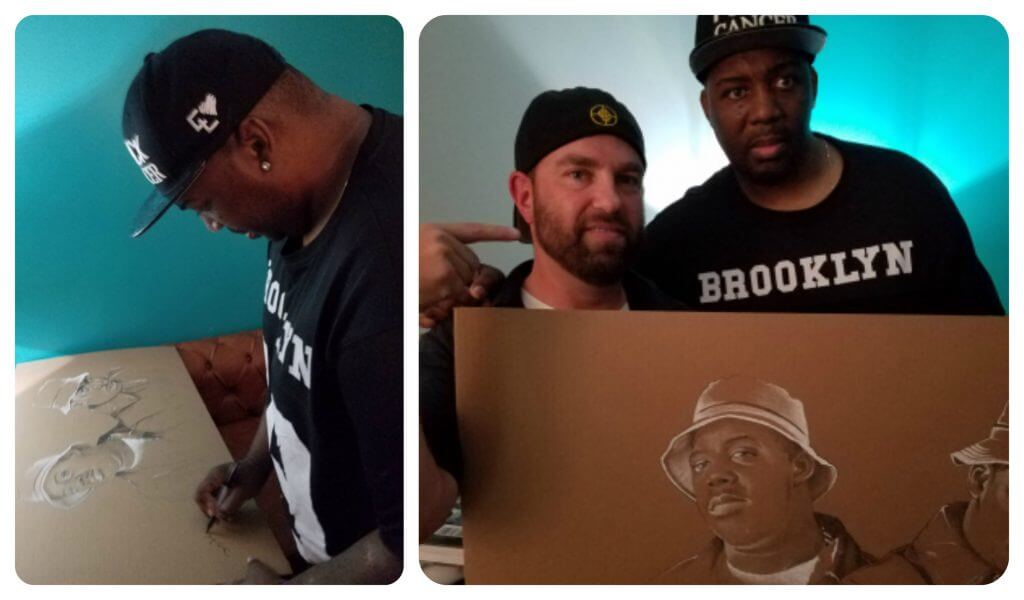 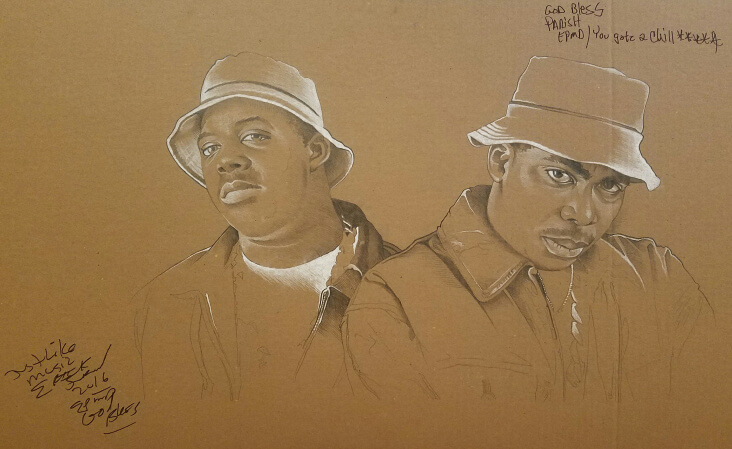 A few minutes later, I met Parish Smith. He also agreed to add his signature to the composition. While I neglected to get a photo with him, I did remember to pull out the My Rules book. It’s a heavy book, that was tough to lug around.That being said, I’m so glad I brought it along. Glen’s images are a thorough history of the early days of Hip Hop. The men in that hallway each had a connection to the book and the imagery. I’m sure many of them went and bought a copy. My goal is to fill it with signatures and hear stories to accompany each photo. I have a lot of work to do. 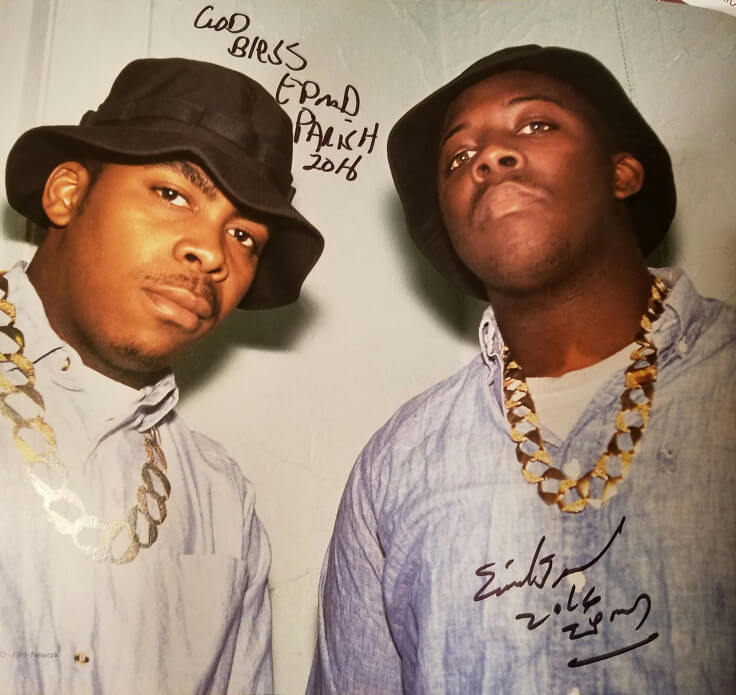 EPMD – Photo by Glen E. Friedman (from the book My Rules)

The time between each set was arguably the most exciting. There would be a lull in the action and the volume of the corridor, when it would then erupt with an avalanche of bodies and the euphoria of a set well played. Hugs, backslaps, and wide grins conveyed the happiness of friends reunited. Oh wow, Kurtis Blow just walked by! Is that Spoonie Gee? Kool Herc? The history of Hip Hop was on display, and I was absorbing each new interaction and new story.

As if it were scripted, the last meeting of the night offered mystery and  uncertainty. I was ready to meet Ice T, and his set was coming to a close. I moved towards his dressing room, when about fifty people burst into the close quarters. While there were a lot of people in the room already, Ice allowed five new people at a time to join him. Under the circumstances, it was all very organized. Before I went in, I met DJ Evil E. He gave me a little pep talk, and we posed for a picture. 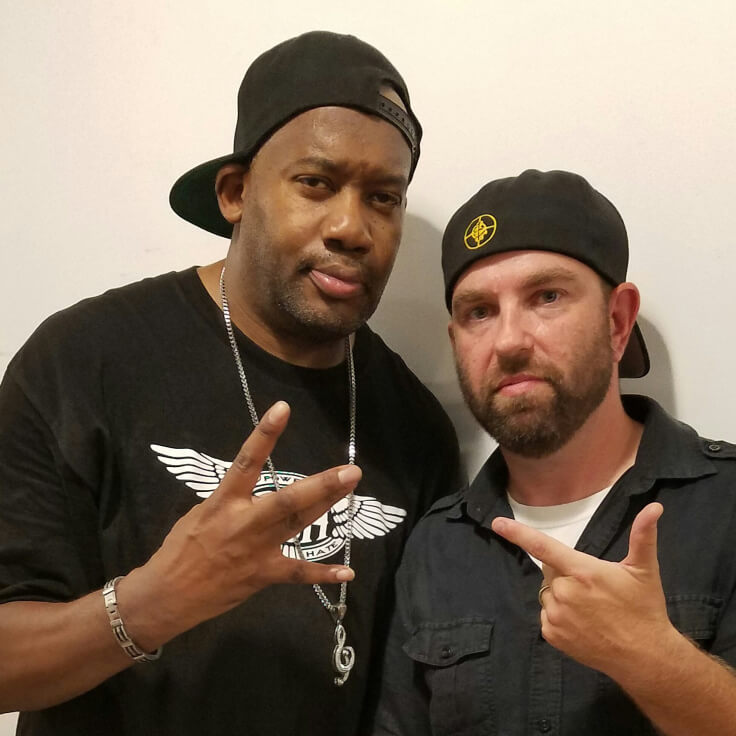 He really thought Ice was going to want the new drawing I made. I thanked him for his help, and got ready to go in. With that, Mick Benzo poked his head out of the door, and said “Five more! But, these are the last five!” He pointed to four people in line, and counted off “one, two, three, four …and that guy – five”. I was “that guy”.

I was the last one to walk in, and saw Ice on the far side of the room. He was sitting on the end of a couch, and I pulled out the drawing. “Woah!  Where did you get this?” he said. “I made it.”, I replied proudly. “You made this?” “And what’s your name, man?” “I’m Andy Katz”, I said. “Andy Katz?”  “OK, Andy Katz, what do you want me to do?” I asked him to sign it, forgetting to request specific lyrics. A few people snapped pictures, and I was done. I strutted back out to the hallway to show Evil E my handiwork. Another mission accomplished. 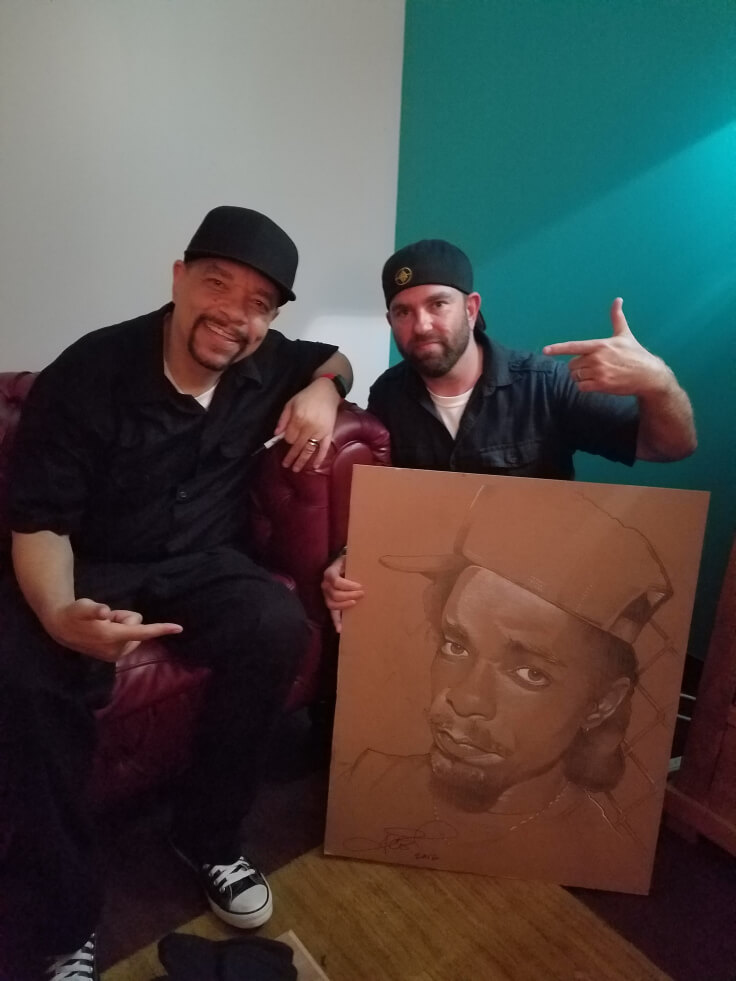 The Art of Rap Festival was an incredible experience. It was an exclamation point on my summer, and the inspiration for the setting of new artistic goals.Special thanks to Chuck D, Mick Benzo, Busy Bee, Ice T, DJ Evil E, Professor Griff, Spoonie Gee, Erick Sermon, Parish Smith, Kool Herc, The Sugarhill Gang, Melle Mel, Scorpio, Naughty By Nature, Mobb Deep, Smiff and Wesson, Kurtis Blow, Flavor Flav, Kate Gammell, and everyone else who was there that night. I was grateful for their time and attention. Most of all, I was grateful to experience Hip Hop.It’s alive and well. It was a special opportunity, and I’ll think of it often. – AJK 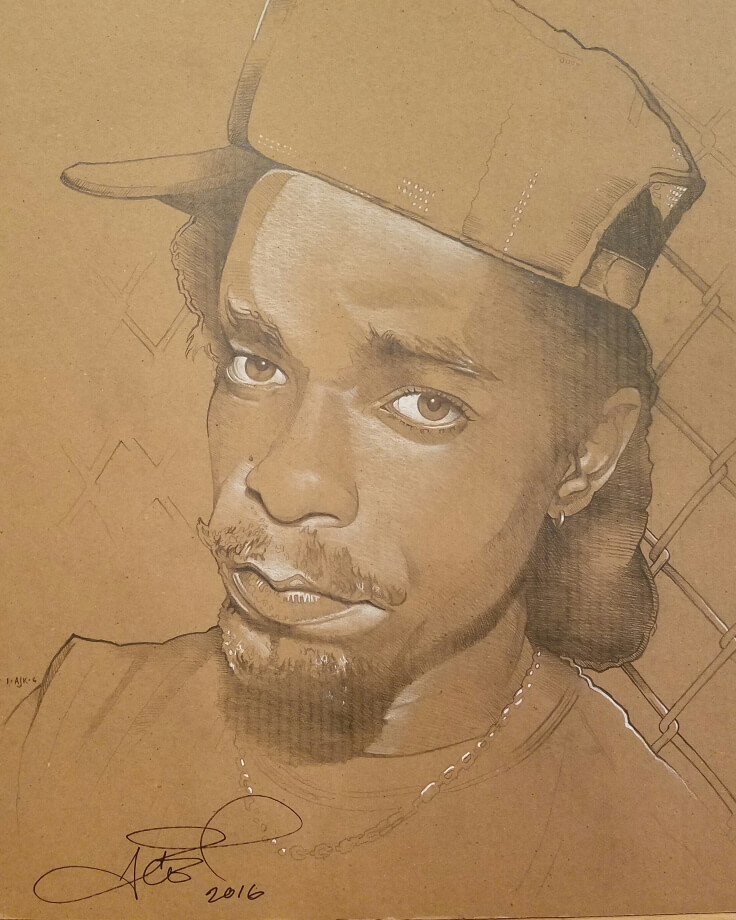