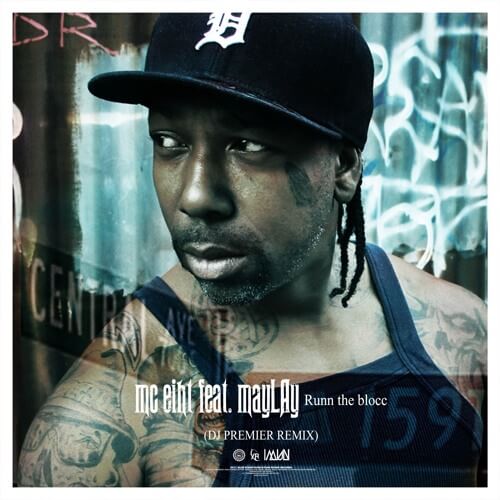 First street single from MC Eiht‘s forthcoming new solo album, Which Way Iz West, which is executive produced by DJ Premier & MC Eiht and will be released in a joint venture with DJ Premier’s Year Round Records and MC Eiht’s Blue Stamp Records.

DJ Premier stated to XXL “Runn The Blocc” was originally done as a freestyle joint 2 years ago over the same track as Black Moon’s “Who Got The Props”. I’m a huge fan of Young MayLAy from the west coast and he can spit. So when we finished mixing the album, I wanted to keep the lyrics and put a brand new beat to it so that it sounded like a whole new song.”

MC Eiht chimed in to XXL with his own comments “When I originally got the beat from Brenk (Sinatra), rather than do something that glorified hustling, I wanted to drop something more along the storyline of how it’s so stressful in the streets. Then Premier sent MayLAy and I a beat and it just fit my vision of how the game used to be perfectly; knowing hustling is still a necessary evil and having to deal with everything that comes with it. Preemo heard the final product and said it needed to be on the album; so now it’s official.”