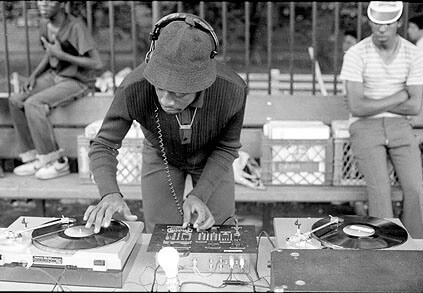 Hip Hop has always seen its artists giving props to the ones that came before. For this list, we have selected 10 dope tracks that in one way or another deal with Hip Hop’s history or pay homage to its pioneers. Enjoy!

“When Eazy-E was playing on the radio / I knew exactly how my day would go / California sunshine coming in / Singing gangsta rap with all my friends / The origins of California Hip Hop / Where you can pop, lock, or you can get shot / Black, white, latin, asian, living in this melting pot / Throw up your W and it don’t stop”

Underrated West Coast emcee Murs comes with a smooth tribute to the history of West Coast and Gangsta rap. Amazing track from Love & Rockets 1: The Transformation, yet another quality Murs album.

“Things done changed, but they stay the same”

Really nothing more than some name-dropping of old (and new) Hip Hop artists, but a dope track nonetheless.

“Remember popping and locking to Kurtis Blow, the name belts / And Scott La Rock the Super Hoe back in Latin Quarters / When Slick Rick was spittin La Di Da Di / Gaming the hoochies at the neighborhood block parties”

“I wanna go back to yesterday…”

Say what you want about the Black Eyed Peas – this track is straight dope. The awesome video (even if the concept was copied from Erykah Badu’s ‘Honey’) and the brilliant interpolation of classic Hip Hop songs into track’s instrumental, make this a beautiful homage to some of Hip Hop finer moments.

KRS touches on some landmark events of the past, saying ‘I was there’ – telling us his knowledge through experience will always be more valuable than outsiders’ observations and thoughts on (Hip Hop) history.

“But I’ma take her back hoping that the shit stop / Cause who I’m talking ’bout, y’all, is Hip Hop…”

Common‘s super classic takes us on a metaphorical journey in which Hip Hop is depicted as a woman for whom his feelings have changed over the course of the years, but who he will love always anyway.

“Word is bond, if I hear another wack rap song / I might snap and it’s an actual fact / That I’mma kick it like that, cause this is strictly bout the whayback…”

This dope track has the Artifacts reminiscing about the days of wayback, referencing the purity of early Hip Hop and other cultural elements such as graffiti and breakdancing. Also note the sampling of some classic Hip Hop songs.

“Remember Bronx River, rolling thick / With Kool DJ Red Alert and Chuck Chillout on the mix / When Afrika Islam was rocking the jams / And on the other side of town was a kid named Flash”

One of the most famous dis tracks of all time, in which KRS One pretty much ended Queens emcee MC Shan’s career before it really got started. It is also an excellent evocation of the early days of Hip Hop. An all-time classic Hip Hop song from the seminal Criminal Minded album.

“I got a flyer in my hand, Bambaataa with Cold Crush / The place is packed, with Johnny Wa and Rayvon / Lovely ladies smelling sweet with a lot of Avon / Jazzy Jay by my side, Charlie Chase behind me / Flash and Theodore, super cuts that blind me…”

An awesome track in which Kool Keith takes us back to the days of the early Hip Hop parties, paying homage to all the pioneers (while dissing Kool Moe Dee on the sly…).

Co-produced by KRS One, this Just Ice classic is one of the earliest history lessons in Hip Hop. Almost 30 years later, Just Ice’s first person account of Hip Hop’s early days has become a landmark in Hip Hop history. Listen and learn!