When Joey Bada$$ discussed the title of his first mixtape he said, ‘the only concept that was really behind it was how the people refer to the 90s as the golden age of Hip Hop.  So ‘99 being the last year of that age, it was basically like a “last hope” type of thing you feel me?’.  Joey, his Pro Era crew, and the Beast Coast movement, have succeeded in resurrecting the golden age.  Their music has brought new life to the boom-bap sound, with none doing it more successfully than the Badmon himself.

In this top 10 list I have included only tracks released by Joey Bada$$ as the lead artist.  Therefore, I have not included some great songs that he is featured in, such as ‘5 Minutes’ by Kirk Knight, or cuts on Pro Era collaborative mixtapes like ‘Overseas’.

Hip Hop started as party music and this track is playful Hip Hop at its best. Joey and DZA brag and joke over a hypnotic and soulful Bruce Leekix Sade sampled beat. Some of Joey’s internal rhyming on this track is top quality and exemplifies his reputation as a lyrical heavyweight in a new era. For those who loved the old school vibe of 1999, ‘Death of YOLO’, from his second mixtape, is a continuation and improvement of the fun-loving songs of his debut.

Late night cruisin’, fusing the green with the Cuban
So swift we moving through clouds intruding

One of three 2016 releases from the Badmon, this gloomy and reflective track sees Joey ponder his past decisions and plot his way through his new success and fame. One decision he discusses is turning down Roc Nation, which I think most of his fans will still be thankful for as it has allowed him to retain his independent vibe.

With a beat from the ever reliable Statik Selektah, the future seems as bright as ever. It is worth noting the Malcolm X quote in the cover art, which could suggest Joey will be coming back with some much needed political Hip Hop in the next few months.

A highpoint of the debut studio album B4.DA.$$, this track features a melodic piano based beat from fellow Pro Era member Kirk Knight. Joey rhymes about higher spirts and being in a higher state of mind, the kind of topics he and the Beast Coast movement have kept their third eyes on from the beginning.

I keep the bombs in my basement
When I detonate, you can feel the vibrations
I got your mind shaking, am I right?
My light gon’ spark for generations

At number seven is the track ‘My Yout’ featuring UK singer Maverick Sabre, whose contribution to the hook makes this slightly superior to the Summer Knights version. The Chuck Strangers produced beat and accompanying video give this song an undoubtedly Caribbean and reggae vibe, which is Joey paying homage to his roots having been born in Jamaica. The fusion between reggae and Hip Hop is one I hope to see Joey revisit on future releases.

One hand on the mac, one hand on my sack
I’m thinking to myself what if I handed it back
But I gotta hand it to myself I’m handling rap
Handsome versing that’s like hand to hand combat

Released as one of the first teasers for Bada$$’s sophomore mixtape Summer Knights, and yet another example of the near perfect chemistry between a Statik Selektah beat and Joey Bada$$ rhymes. ‘Word Is Bond’ is an unashamed homage to the vernacular of golden age of Hip Hop, even sampling Tupac in the hook.

With knowledge juice and deuce Cubes of Metatron
They wouldn’t hear the tone through a megaphone, let alone
Cella phone, but my line stay hella blown

On an album packed with bangers this is the hottest. The horn fuelled beat perfectly matches Joey’s braggadocio rhymes as well as the video, where he is raised up to the skies above everyone else in the game. ‘Christ Conscious’ helped escalate the hype for B4.DA.$$, and eighteen million views on YouTube tell you it was the hit the album needed.

Motherfuckin’ microphone eater
Spittin’ hot shit, hit ya dome with the heater
Wouldn’t wanna be ya, dish lyrical fajitas
Got dragon balls like my name was Vegeta

Back in 2012 this was the track that propelled the 17-year-old Joey to fame. Four years later it still seems as fresh as ever. Bada$$ and his late mentor Capital Steez packed this old Styles of Beyond beat with enough pop culture references and double entendre to make it truly timeless. The only reason this song is not higher in the list is because Steez slightly outshines the young Joey in the second verse.

Get your intel right, your intelligence is irrelevant
But it’s definite I spit more than speech impediments
Brooklyn’s the residence, the best and it’s evident

‘Unorthodox’ is what you get when you combine one of the hottest young MCs with one of the greatest producers of all time: a classic. In what was a bonus track on Summer Knights, Joey gives us perhaps the best taste of his lyrical prowess, with internal rhymes and metaphors for days. This track, more than any other, established his place as a major force in the golden age resurgence.

Basically I grind with the grimiest
Learn how to eat in the jungle full of hyenas
And vultures, don’t worry what the verse will cost ya
From the young scorcher, just remember who taught ya

Giving homage to Souls of Mischief, ’95 Til’ Infinity’ is Joey’s way of telling the world his music, just like himself, will be around forever. This song marked a major break away from the laid-back style of 1999 and established Joey’s grittier and harsher side, which is something not all his fans appreciate.

Love of music is all about memory and nostalgia and it’s easy to become trapped in the mindset that the first album you heard by an artist is always going to be the best. Once the nostalgia fades though, it becomes clear that Joey Bada$$ can and has expanded his style for the better.

I peep the obscured, and what ain’t normally easy to observe
I swear I’m born abnormally absurd
If I give you a piece of mind you’ve been disorderly disturbed

Despite my belief that it is important to look beyond nostalgia and memory when appreciating an artist, we all fall victim to it, and in my opinion Joey Bada$$’s best song is the first of his that I heard. ‘Hardknock’, which is produced by UK OG Lewis Parker, is Joey at his finest. This song will forever be immortalised by his second verse when the beat drops out and he rhymes acapella, a moment to make everyone stop and listen.

On the block in the rock spot, Glock cocked watching out for cops
All about their cheddar, young guns know nothing that’s better
Like fuck a prison letter, those Beretta’s led us to the lettuce
Relish fetishes, menaces want the senator’s percentages
If you ain’t prejudice you still a nemesis
Smoking on the Clematis, get open like a present is
Now your presence is on the premises for them presidents 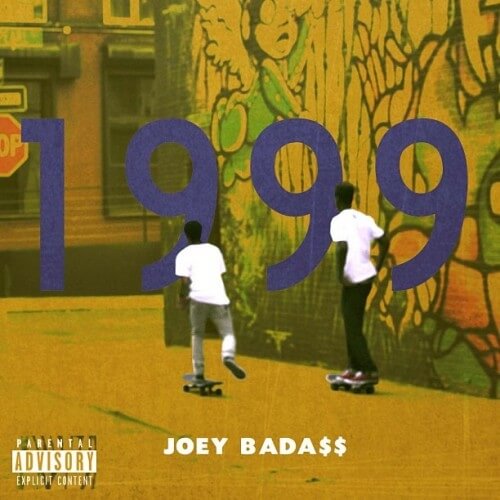 After hearing the Beastie Boys for the first time, I have been hooked on Hip Hop. Through that trio I expanded to Run DMC and A Tribe Called Quest. From then on I discovered more favorites from Outkast, Gang Starr a…