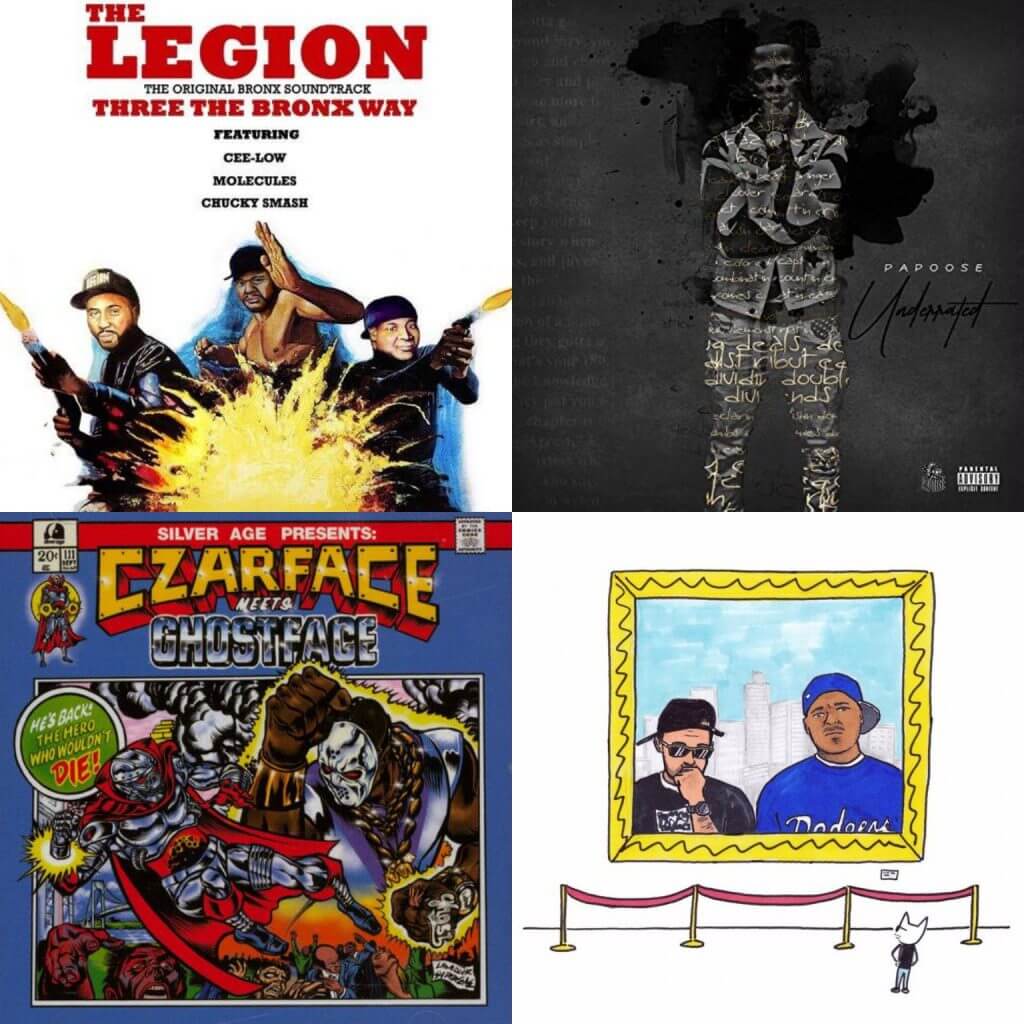 2018 was an excellent year for Hip Hop, a year that decades down the line may very well be mentioned among the best years Hip Hop ever had to offer. It is hard to predict which albums released in 2018 will prove to have longevity and if one day any of them will be considered true classics, but the quality was there – just check this list (Best Hip Hop Albums Of 2018) and this one (18 Hip Hop Albums Released In 2018 You Should Not Sleep On) if you have any doubt.

Will 2019 be able to rival 2018 in terms of quality Hip Hop releases? We will have to wait and see – in this article you will find 6 albums released this February, a few of which we would be surprised not to see ranking high on end-of-year lists. Forget whatever you find charting on Billboard – these 6 albums released this month show and prove that Hip Hop is alive and well. Check ’em out and enjoy! Mixtape king Papoose returned this month to drop his 3rd studio album, aptly titled Underrated. An LP with two distinctively different sides, but both hit hard and make for an overall excellent album. Papoose has always been a top-tier emcee with way above average intelligence and bar-writing ability – and he shows off his lyrical skills all over this album: on the raw boom bap tracks that start of the album and on the mature and more emotionally-laced songs that make up most of the second half of this album.

“Golden Child”, the ode to his and Remy Ma’s child will strike a chord by other young parents, and tracks like “Precious Jewel” – an articulation of his love for his wife Remy Ma -, “Discipline” and especially “Time Is On My Side” are strong tracks that deserve a close listen as well. Other favorites are the hard-hitting opening track “Underrated” and the DJ Premier-produced “Numerical Slaughter”, a sort-of sequel to Papoose’s own legendary “Alphabetical Slaughter” track.

Make no mistake – Papoose’s Underrated is a dope-as-hell album you have to check out now:

The Legion - Three The Bronx Way 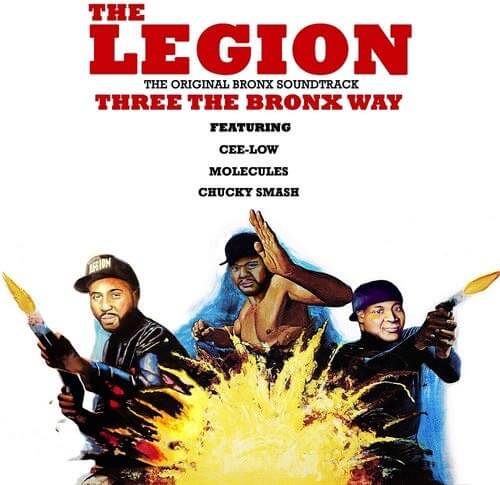 You may know this Bronx rap crew from their low-key but excellent 1994 debut, Theme + Echo = Krill. That album (partly produced by Showbiz and Black Sheep) received mixed reviews, mainly because critics could not fully appreciate what The Legio was trying to do: bring back that Golden Age feeling which they felt was already over and done with in 1994.

Straight from the sample-laced “Intro” cut up by DJ Eclipse to dope tracks like “Word” (featuring Sadat X), the nostalgia-inducing “1980 Something”, “Fresh”, “Three The Hard Way” to the “Outro” – Three The Hard Way is a straight-up raw boom-bap album, perfect for all those who can never get enough of real Hip Hop with that vibe of AUTHENTICITY. Like the previous entry on this list, Sean Price’s latest post-humous release opens strong with an intro that sets the tone for the rest of the album. “Bear Witness” has DJ Revolution cutting up a bunch of samples that fans of 80s Hip Hop will recognize – and which does what it intends to: transporting the listener back to these early days of Hip Hop.

The album title 86 Witness says enough: Like The Legion with Three The Hard Way, Small Professor used Sean Price’s material they intended for a collaborative effort to create an excellent record with a nice throwback vibe. It features Sean Price as we know him: spitting often humorous, sometimes nonsensical bars and punchlines, mostly about his favorite subject: himself.

It has to be said the album feels more like an EP than a full album; next to “Refrigerator P” – a song which was already included on Sean Price’s latest album Imperius Rex – there are only 5 new full-length tracks on offer. All these tracks include guests, but P. never gets outshined or overcrowded, so it feels like a true Sean Price project nonetheless. With a couple of more new tracks it may have been a contender for the end-of-year best albums lists, as it is 86 Witness is a (too) short, but worthy addition to the legacy of the late great Sean Price.

People Under The Stairs - Sincerely, The P People Under The Stairs – easily one of the most underrated duos in Hip Hop, ever. Underrated, but critically recognized and lauded by those in the know. Thes One and Double K have been dropping dope albums ever since their brilliant debut The Next Step in 1998, now they are closing off their amazing run with one last album: Sincerely, The P, the 12th and final album of the West Coast duo’s 20-year career in the Hip Hop game.

Sincerely, The P features 15 songs and clocks in at just under an hour – and it is hardly a surprise that after 11 mostly excellent albums, this one is another winner, and a great way to go out for PUTS. Much respect to Thes One and Double K for their contribution to the Hip Hop canon – be sure to check out this album if you haven’t done so already. 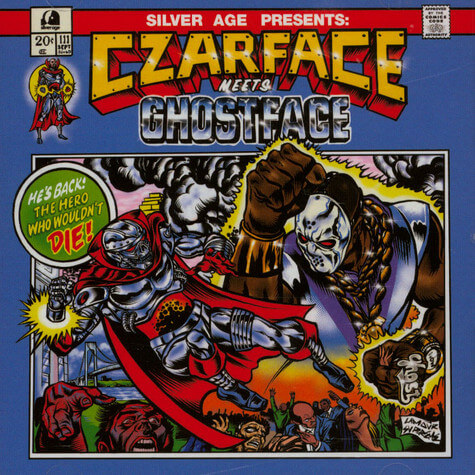 Much like 2018’s Czarface Meets MetalFace with MF DOOM, the collaboration of Czarface with Ghostface Killah makes perfect sense. Thematically and stylistically of course, but also taking into account the shared Wu-Tang history of Ghostface Killah and Inspectah Deck. Rebel INS has always been of Wu-Tangs best lyricists, and together with Boston underground legends 7L & Esoteric he is the process of putting together a pretty impressive series of albums as Czarface. Who better to recruit than Ghostface Killah to ensure the creation of another potentially timeless Hip Hop record?

Czarface Meets Ghostface Killah is top to bottom quality, most excellent from start to finish.“Czarrade ’87″, ”Morning Ritual,” “Super Soldier Serum,” “Listen to the Color” (6 minutes of lyrical brilliance over changing beats), “Masked Superstars” are standouts, but the whole album slams. Dope bars and excellent boom-bap soundscapes – for HHGA this one already is a 2019 favorite which will remain on heavy rotation no matter what else will be released later this year. Forget mumble rap, trap, autotune and fake singing – this is real Hip Hop right here. On February 22nd Smif-N-Wessun released their 7th studio LP The All. Tek & Steele fuse their flows with the signature sound of producer extraordinaire 9th Wonder and his duly respected producer conglomerate Soul Council, to create a nostalgic yet contemporary and music experience. With guests appearances from Raekwon, Rick Ross, Rapsody and Musiq Soulchild we expect this to be another album that a lot of heads will keep on rotation for a good while.

The All is the duo’s sixth studio album (not counting their unreleased Rawkus effort), and a strong edition to their catalog. Sure, it’s not Dah Shinin’ – their classic 1995 debut which will likely forever remain their magnum opus – but The All is a strong album nonetheless. Solid bars, soulful soundscapes – we sure are happy with the return of Smif-N-Wessun.