The Doctor’s Office: The Best Albums From Aftermath 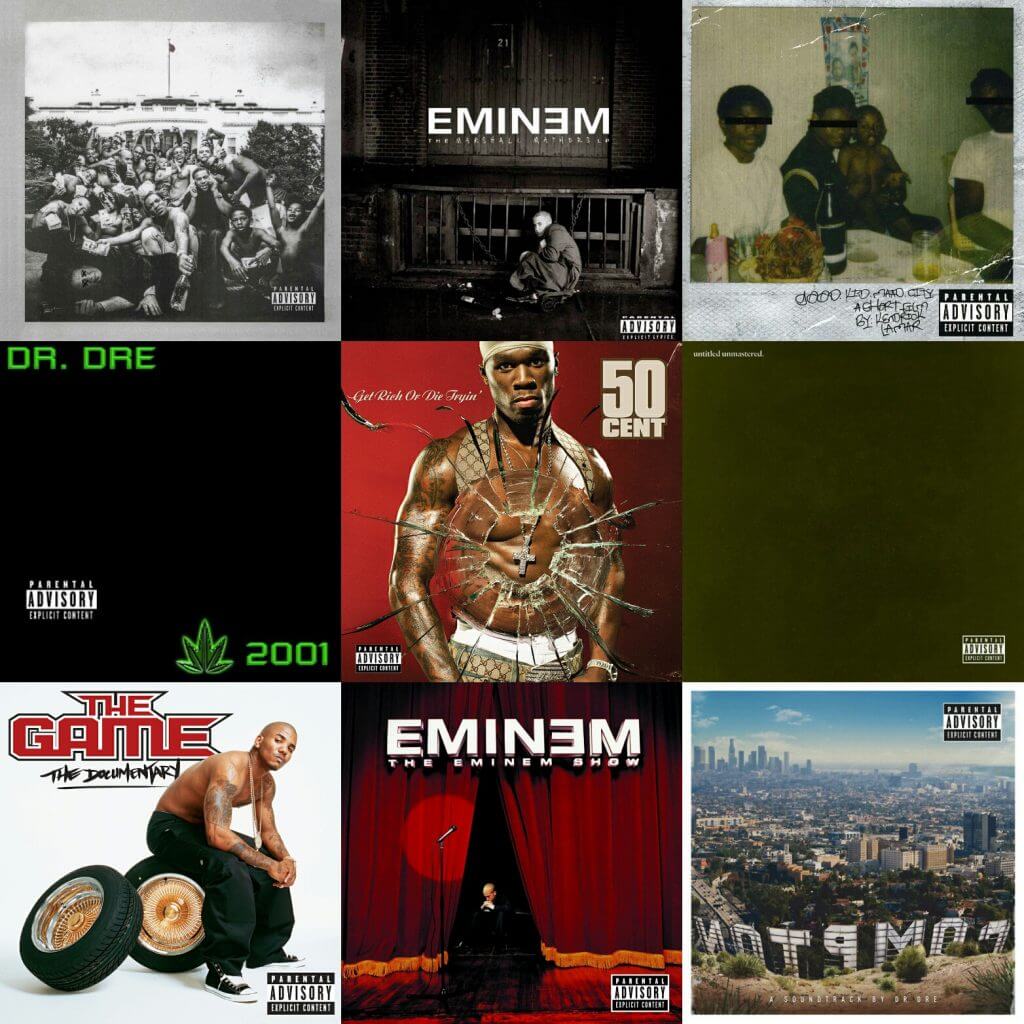 With this list, we go to the house the legendary Dr. Dre built. When he left Deathrow Records, he wanted a fresh new start, a completely new slate – so he started Aftermath Entertainment. Aftermath became home to many different artists ( most of them for short periods), none bigger than a Caucasian emcee from 313 named Eminem.

At some point, he had names like Eve, Last Emperor, Busta Rhymes, Raekwon, Joell Ortiz, Bishop Lamont, Slim The Mobster, and the legendary Rakim all on his roster. While most of these artists never actually dropped anything on Aftermath, the ones that did get released put out some of the most critically acclaimed albums ever. With that said, let’s start the best releases to drop from Aftermath (this includes albums from labels in conjunction with Aftermath like TDE, Shady, G-Unit, and others). How do you possibly follow-up one of the strongest debuts in history on a critical and commercial level? That was the question Curtis Jackson was asking himself when it came to life after Get Rich Or Die Tryin’.

The answer came with his follow-up, The Massacre. This album, although lacking some of the craftiness and straight street accessibility that made GRODT a classic, did a damn admirable job. Containing an abundance of infectious cuts like “Candy Shop” “Disco Inferno”, and “So Amazing”, as well as gutter tracks for the street like “God Gave Me Style”, “In My Hood”, and “Baltimore Love Thing”, The Massacre sold almost as much as its predecessor. It would be years before we would see 50 bring this kind of heat again. It had been over a decade since the last time we’ve been blessed with a whole full-length album from the good Doctor. While everybody was painfully anticipating his mythical Detox album, word got out he had scrapped the whole project and wanted to start on something else, in conjunction with the hugely successful and record-breaking movie Straight Outta Compton.

The rumors turned out to be true, and boy what an album it was. Dre dropped Compton, and from the moment you pushed play, you were reminded of why he’s one of the single most acclaimed producers in all of music. Sounding refreshed and refueled, Dre recruits old homies like Eminem, Snoop, Xzibit, and Ice Cube, as well as up-and-comers like Justus, King Mez, and new Aftermath signee Jon Connor to help him with this impeccable album.

While not the likes of 2001 or his landmark debut The Chronic, this album still thoroughly bangs and became of the decade’s biggest accomplishments. This poses the same question asked earlier about 50 Cent and The Massacre. How do you possibly follow-up a masterwork like The Marshall Mathers LP? I mean the album sold nearly two million units in one week, making it the highest selling Hip Hop album in one week ever.

Well, Marshall answered with The Eminem Show, a slightly, and I do emphasize slightly, more grown up and open look at Marshall. While still bringing plenty of controversy with cuts like “Square Dance”, “Say Goodbye Hollywood”, and especially the politically and socially charged “White America”, he also bares his mind and heart on tracks like “Cleaning Out My Closet”, “Sing For The Moment”, and “Hallie’s Song”.

Winning practically every award you can win, it was seen as a formidable successor to MMLP. Ultimately, this album became his second straight Diamond-selling album. A young Compton emcee named Jayceon “The Game” Taylor linked up with 50 Cent, Dr. Dre, and G-Unit in 2004, and was seen as an extended G-Unit member. When it became time for his debut, all eyes were on him to be the new savior of the west coast, and the album completely and totally delivered.

With heavy assistance from 50 and Dr. Dre, his debut The Documentary became an instant classic and very much resembled the commercial and critical acclaim of Get Rich Or Die Tryin’. There was hit after hit on this album, from “Westside Story” to the Kanye-crafted “Dreams” to the crossover smash of “Hate It Or Love It”. The Game had arrived, and with five million units sold, there was no stopping him. What can you say about King Kendrick? The man is just not human. His abilities on the mic are beyond description, not just from a technical aspect but from a writing aspect as well. His sophomore album, To Pimp A Butterfly, has become something of a landmark and an album of greatness and artistic perfection. During the recording process, he had some throwaways that he ended up putting on his own version of The Lost Tapes called Untitled.Unmastered.

With no titles and clearly no mixing or mastering done, these cuts would’ve been completely perfect for To Pimp A Butterfly, or even for its own whole new full-length album. Artists like Kendrick come along once in a generation, and this album unmastered is better nine out of ten albums you’ll hear in 2016 completely mixed and mastered. There is no denying that 2003 completely was the year of 50 Cent. Already catching major buzz with his hit “How To Rob”, and his shelved debut Power Of The Dollar, the sky was the limit for 50 – but due to his shooting and the label not wanting to deal with any of the drama pending, they dropped him.

What was Columbia’s loss turned into Eminem and Dr. Dre’s gain, as they scooped him up and, along with the worldwide sizzle of “Wanksta”, dropped his enormously anticipated debut, Get Rich or Die Tryin’ .

This album was nothing less than a destroyer, critically and commercially. With “In Da Club” spinning worldwide, the album sold a million units in a week and ultimately sold over ten million units worldwide, officially letting people know that music’s newest breakout star had arrived. Yeah I know, the “proper” title for it is 2001, but what the hell, YOU know that’s what it was supposed to be called. In any case, Dr. Dre was faced with the nearly impossible task of following up his genre-defining debut The Chronic from eight years earlier. Did he succeed?  Hell yeah he did, and then some.

Dre didn’t do anything except updating his sound, relying less on Parliament samples and choosing to go more towards a new gen-gangsta sound filled with synths, heavy bass, impactful drums, and strings. Dre had a fluidity that was simply dazzling and impeccable.

Much like on The Chronic, when he put on Snoop, Tha Dogg Pound, RBX, Warren G, and Rage, he brings newcomers like Eminem, Hittman, and Knock-Turnal, and all – especially Em – do exceptional jobs. It’s not often you hear about two back to back timeless events in Hip Hop in album form, but if anyone could do it, Dre could. In an age where a debut album doesn’t have nearly as much overall merit as continuous hit singles, TDE’s most acclaimed talent, Kendrick Lamar got down with Aftermath and when word got out that TDE was on board with Dre, the Hip Hop world couldn’t stop talking.

After the buzz from “The Recipe”, he dropped his TDE/Aftermath debut, good kid, M.A.A.D. City, and the game has not been the same since. Seen as one of Hip Hop’s most phenomenal debut albums in nearly a decade, Lamar showed Compton through the eyes of a young man trying to survive the pressures of self and of the Compton streets while trying to make a way out of his environment and push to new beginnings.

good kid, M.A.A.D. City was nothing short of amazing, reaching platinum status plus winning numerous awards. A new star had been born, but little did we know, his greatest achievement was yet to come. In ’99, the world was introduced to a bleached-blonde, blue eyed rhyme animal who exhibited dark and twisted humor and who was a mic destroyer as well. This young man was Eminem, and his major-label debut, The Slim Shady LP, was a major, major hit – selling around eight million units based on hits like “My Name Is”, “Just Don’t Give A Fuck”, and “Guilty Conscience”.

He followed The Slim Shady LP up with The Marshall Mathers LP, a noticeably darker, and way more brutally honest Em. This was not the joking, twisted humor Slim Shady. We got a look at Marshall, a man that came from a broken home with a very volatile relationship with his daughter’s mother as well as an even more venomous one with his own mother.  One of the most controversial albums to ever exist, Eminem pushed as many buttons as possible to deliberately piss off conservatives and haters alike.  Delivering one of the game’s most compelling cuts ever heard in the deranged “Stan”, this album was filled with anger, drug usage, misogyny, homophobia, and so many other taboos and emotions it would be hard to keep up. Regardless, this is a masterpiece of an album, in all of

One of the most controversial albums to ever exist, Eminem pushed as many buttons as possible to deliberately piss off conservatives and haters alike. Delivering one of the game’s most compelling cuts ever heard in the deranged “Stan”, the rest of the album was filled with anger, drug usage, misogyny, homophobia, and so many other taboos and emotions it would be hard to keep up.

Regardless, this is a masterpiece of an album, in all of its savagery and conflicting emotions. Em not only sold over twelve million units worldwide and won a shitload of awards, it certified that he was the biggest thing in music bar none. An artistic breakout and breakthrough for Hip Hop, Kendrick Lamar elevated his game to an entirely new level.  Although his debut was a classic in every sense, his follow-up deserved more than the term ‘classic’.

This was history, a musical masterwork of timeless proportions. Easily The Miseducation Of Lauryn Hill of our generation, or even Illmatic or It Takes A Nation Of Millions To Hold Us Back, albums like this don’t come along but once a generation. Eliminating boom bap and sampling for more of a live instrumentalist, stripped down, minimalist approach, the results were spellbinding. Mixing jazz with soul and eclectic rhythms, this album was a heavy look at the Black consciousness from a human level and a societal level. To Pimp A Butterfly put you through emotion after emotion and thought process after thought process. From the concept (which was nothing short of brilliant in itself) to the music to the extraordinary rhymes – with cuts like “Mortal Man”, “U”, “The Blacker The Berry”, and the highly important “How Much A Dollar Cost”, this is an album that will change you.

Get Top On The Phone: The Best Albums From TDE

It's The Roc: The Best Albums From Roc-A-Fella