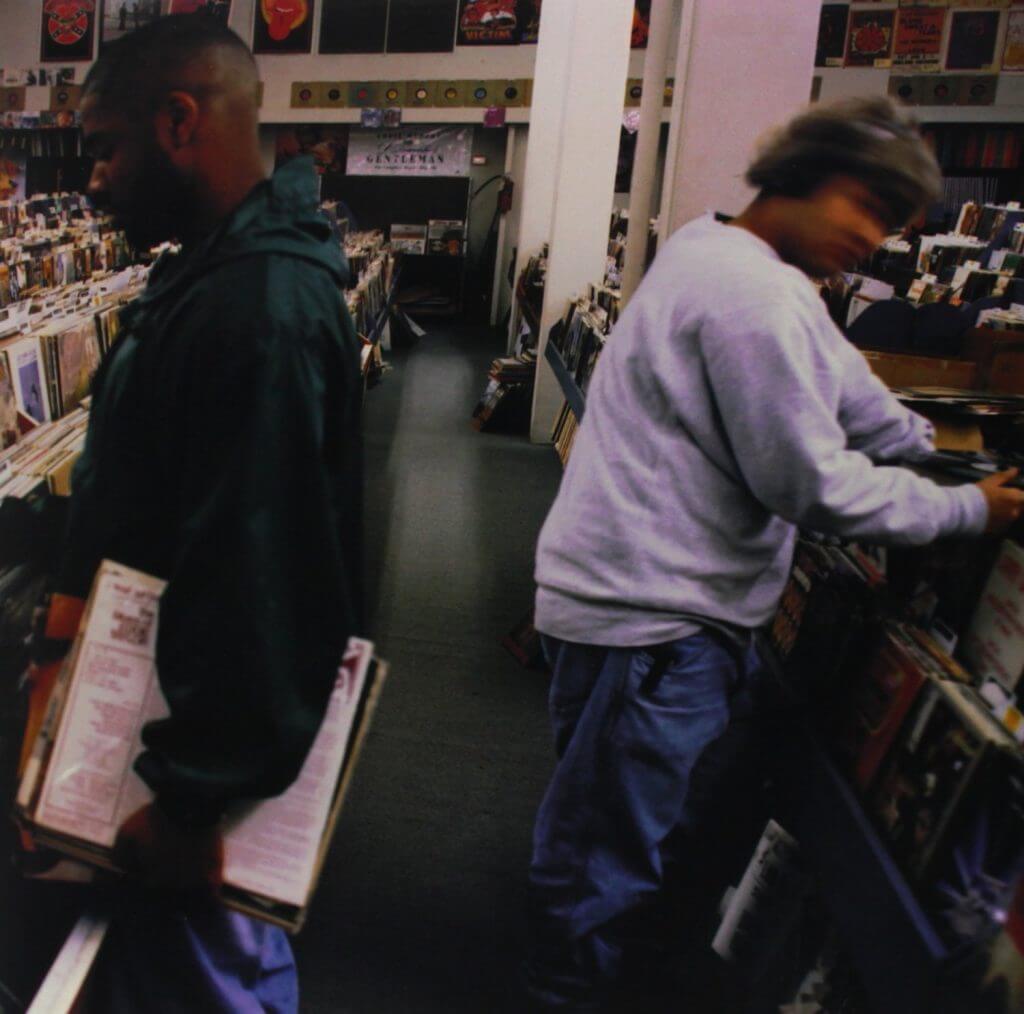 Constructed of 100% recycled sound material, Joshua Davis’ bipolar, sublime ode to sampling exalted the sequencer as instrument, employing it to build the crescendos attributed to classical composition in the context of the Hip Hop beat tape. As obsessed with the correlation of discordant sounds as he was record collecting, Davis used his DJ Shadow pen name to mine the potentiality of rap’s form, abandoning benchmarks like funk and disco in favor of untraversed avenues. The product of this journey is a symphony in miniature, meticulously coupling the ethereal nature of strings and woodwinds with the galvanic kick of break-dance drum. Alternately exhilarating and analgesic, Endtroducing….. converts rap into a purely solitary experience, intended for headphones and nocturnal commutes, perpetually drawing you into folds of foggy humidity and dizzying passages of Gothic organ.

Shadow builds layers from his unearthed elements, reconfiguring or obscuring sampled works to conform to the whims of a piece, never allowing familiarity to distract from the collaborative nature of the whole. Shifts in tone and milieu are signaled by a bout of record scratching or vocal excerpt, subtle enough to be a suggestion or jarringly edited to provoke a vulgar, tectonic shift. Oral passages initially feel opaque or incidental, but gradually reveal intent, expounding on a facet of the production process or cunningly emulating the beat’s progression (i.e. “Now approaching midnight” is minced to mirror the tick of an alarm clock). Beats themselves are often exposed at their most basic before being ruptured and broken into shudders and stumbles, exhibiting a sound from all angles, drawing the listener into the experience of hearing and examining music unconventionally. Though the pairings seem incongruous, often intentionally, all roads and sound marriages lead back to the first movement, which foreshadows the cyclical nature of each respective piece. Creating structural continuity without sonic uniformity makes for a cohesive work free from redundancy, capable of nestling a multitude of genres and concepts beneath the same blanket.

Soldering together jittery bits of drill ‘n’ bass and jazz percussion, “The Number Song” counts up to five before folding into a high-wire, nervy drum solo and influx of low-frequency rumbles, droning perpetually behind a torrent of arithmomaniacal samples. “Just listen to this” repeats endlessly, boring a hole into your temporal lobe, further indoctrinated by the repetitive lull of indeterminate bass tones and shimmering scratch, wildly flailing between each earphone. A down-tempo shift is signaled by the Moon landing countdown and a busy bout of turntable work, if just for a moment, jostling back to full propulsion by way of fortuitous horn break and damaged soul vocal. Just as it seems to find a balance, settling from its caffeine high of rapid-fire sampling, the track doubles back to the intro and runs off the rails, squealing into isolated bits of clatter and crawling to a sludgy, stagnant glop of sound. 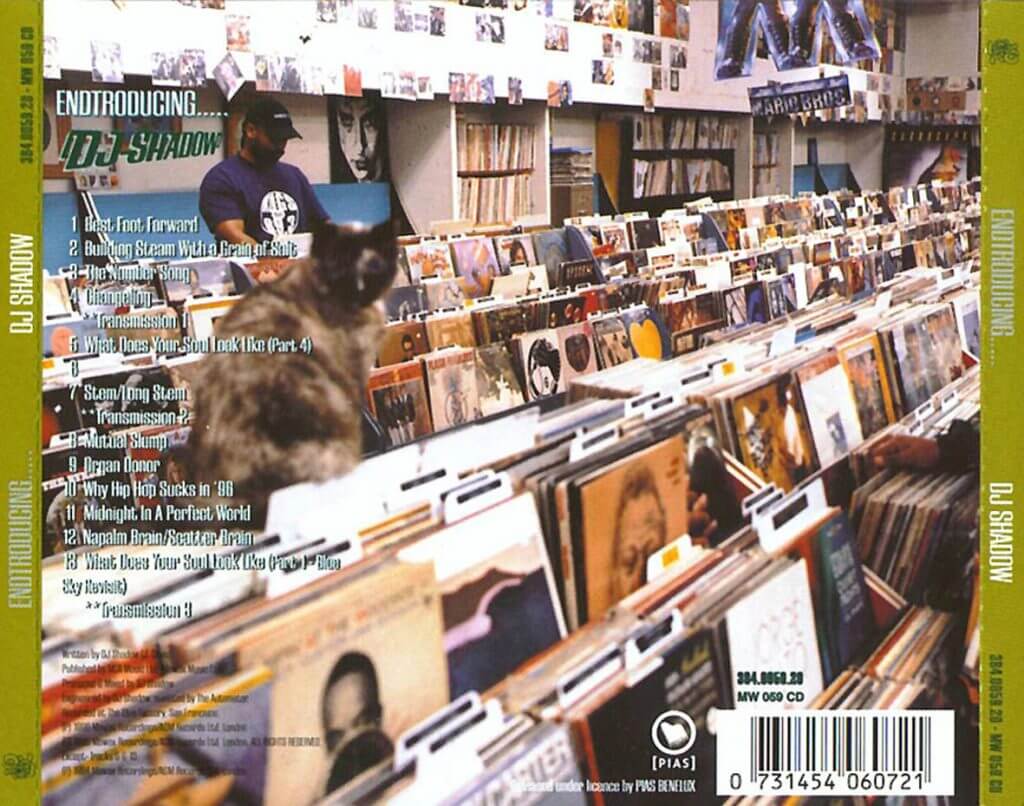 “Mutual Slump” shares this transient nature, but shifts gears erratically, anticipating the listener’s gradual adjustment over the course of the composition. Bursting from beneath one of John Carpenter’s direful dream transmissions, “Slump” is propelled by rollicking drum roll, urgent siren and twangy, bent guitar strum. As the beat steadies, tones clipped from Bjork’s “Possibly Maybe” meet jazzy cymbal and the stoicism of monastic chanting. Furthering the solitary, isolated mood, the drum is separated from the other ingredients, extrapolating on the spacious, cavernous nature of the sound. Shadow once again brings the track back its origins, hitting the breaks and leaving behind the throbbing, tranquil nature of the primary intonation. A storm of primal scratching and resurgence of skittish drum is unleashed following a transmission of another kind, one that amusingly channels the American Dream via Xanadu’s roller-skate kitsch.

The arrangement operates on a dream logic that pairs bits of sound and thought into cognitive, unified strands. It’s sampling as psychological experiment, striking moods through seemingly unorganized ebbs and flows of sound, either as subtle as the hiss of a heat-rippled videotape or as harsh as the bleating of feverish, sweat-soaked saxophone. The constant shift can be unsettling and emotionally manipulative, as anxious as a Hitchcock set-piece or the slow ascent of a roller coaster just before hurtling down an endless chasm. Yet, this contrast elucidates the cerebral nature of the project, which is to expose the power and variety of sound and how each individual note strikes a different chord with the listener. Endtroducing….. functions on both mental and physical levels, manufacturing complex concertos to act as aural Rorschach test, varying between the serene and the turbulent.

DJ Shadow – Endtroducing… was ranked #4 on Matt Deapo‘s Hip Hop Top 50, a ranking of 50 of the best Hip Hop albums recorded between 1978 and 2006, based on this consideration and these rules.