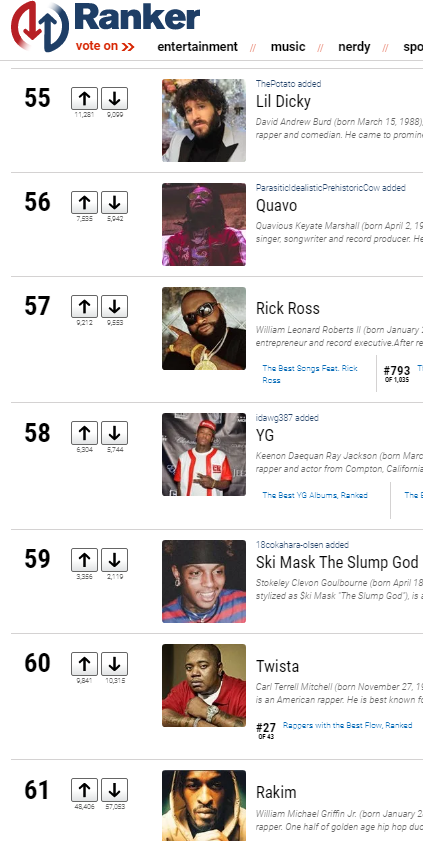 Lil Dicky, Quavo, and Ski Mask The Slump God over Rakim? I quit.

“Every time I stepped into madness of the crowds, I longed for the wisdom of the loneliness.“

“Why don’t you write about rap anymore?”

It’s a question I’m often asked and my cute answer is that I’m too old for it. That’s partly true, as I just can’t get into the new generation of artists. The music doesn’t make sense to me, so trying to write about it would not only be difficult, but also disingenuous.

The other problem is that the internet’s flattening of everything has made everyone a critic. Individual opinions have always existed, but online it can be difficult to discern those that are rational and well-reasoned as a result of years of studying and those that are simply the results of impulsive whims of young fans that don’t think music existed before their births.

Every generation believes subsequent generations are moronic and don’t respect those that came before, but in an era of listicles and rankings, knowing the history of whatever you’re discussing is more important, not less.

All of which brings us to Ranker, a website that compiles lists on everything across pop culture through the collection of fan votes.

I was about to “X” out of it when I, for some unknown reason, decided to read it.

I immediately regretted that decision.

It is a current list, last updated a few weeks ago on February 25, 2020. There have been 6.4 million votes, but only 459,000 voters, so it’s not exactly a fair representation, but I’d expect nothing less from the internet.

Before we get into it, some comparisons.

In The Source‘s 100th issue in January 1998, the ranking of greatest MC went as follows: 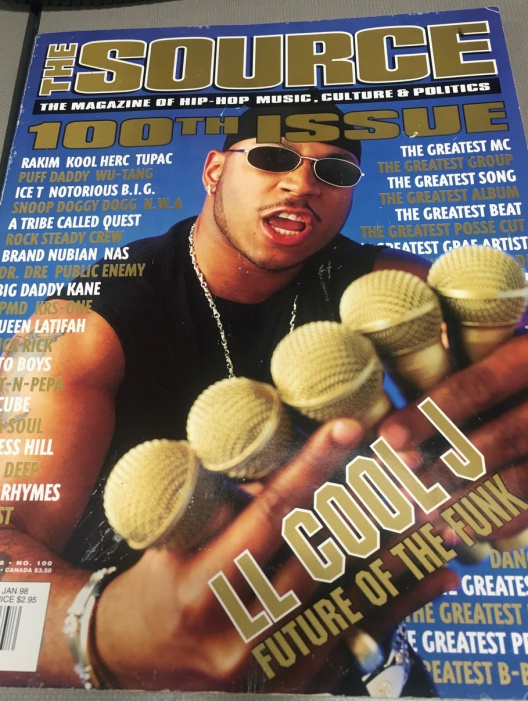 That was largely the consensus at that time. Rakim Allah had such an influence that even after five years without releasing any new music, he was still considered the greatest. Meanwhile, Jay-Z’s career rise only beginning, Nas was coming off The Firm and attempting to balance the dichotomy of his music, and future superstars like Kendrick Lamar were years away from even arriving on the scene.

That was twenty-two years ago, so it makes sense that things would change, but my own book, The Hip-Hop 10, came out in 2012 and my rankings of the best MC were:

In the years since, I’ve wrestled with my list and thought about what changes I would make (add Kendrick?), so let’s see what Ranker has now in 2020:

OK. Nothing too crazy. Maybe some quibbling over who should not be included or a change in the order, but those four are defensible. The legacies of B.I.G. and ‘Pac loom large even nearly a quarter-century after their deaths. Kendrick Lamar has a Pultizer along with several classics and Eminem has a wicked pen and a career that is unmatched by most.

Maybe this won’t be so bad, I thought. Then I saw number five. That’s when things started going downhill. Let’s dig into this ridiculousness.

Dr. Dre, who admittedly doesn’t write his own rhymes and whose albums are great because of the combination of other artists featured on his beats somehow rounds out the top five of the best rappers of all time. It only gets worse from there.

Childish Gambino is 14th and Travis Scott is 15th, directly ahead of legends André 3000 and Nas, who rank 16th and 17th, respectively. Three Stacks co-created Aquemini and ATLiens and Nas gave us Illmatic, It Was Written, and “Ether” but I guess they deserve to be behind the actor from Community and a Kardashian escort. 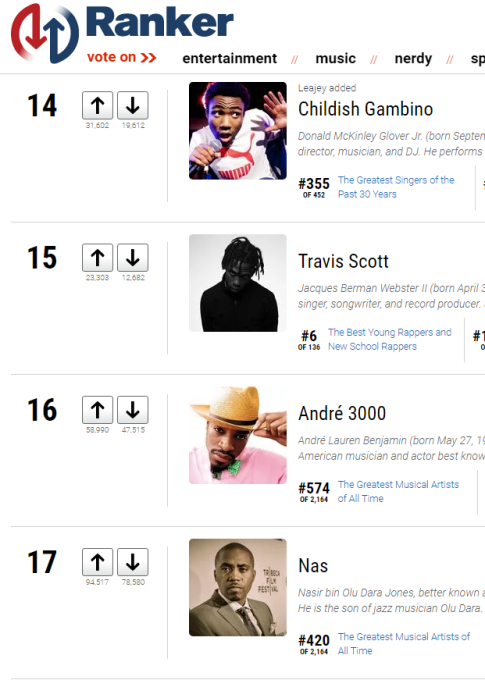 XXXTentacion is 21st, six spots ahead of Jay-Z, who is merely one spot above Nate Dogg, who is definitely not a rapper. Jay-Z broke all sorts of records, influenced a generation of artists, and dictated what rap looked and sounded like for years, but he’s 27th.

Ghostface Killah, who has crafted classics both as a member of a legendary group and a solo artist, is the highest Wu-Tang member at 43rd, one spot behind the incomparable Lil Uzi Vert.

Rakim is the God MC, the man that single-handedly revolutionized hip-hop and influenced every single person to subsequently touch a microphone (whether they realize it or not), didn’t even crack the top fifty, checking in at 61, behind the likes of Lil Dicky (55th), Quavo (56th), and Ski Mask The Slump God (59th). Prodigy of Mobb Deep, who fearlessly battled 2Pac and Jay-Z and inspired a generation of street poets, is next at 62.

Scarface, the lead of the Geto Boys and arguably the greatest southern rapper ever, who I have in my top ten, comes in at 86, a spot above Frank Ocean, whom no one in their right mind would categorize as a rapper.

LL Cool J, one of the all-time greats and the man who first coined the term GOAT, sits at 90th, sandwiched between Kodak Black (89th) and Young Thug (91st).

MC Hammer pops up at 92, while lyrical wizards GZA and Kurupt come in 100 and 101, respectively. 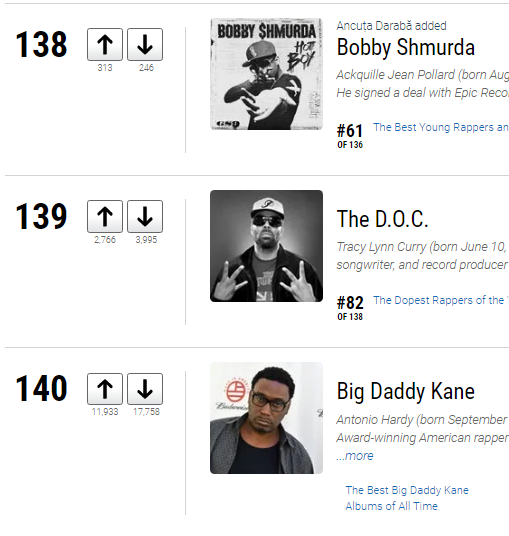 I have no words

Fellow pioneer and legend KRS-One sits at 150th, one spot below DaBaby while Metro Boomin, who doesn’t even rhyme, sits at 180th, three spots above Ad Rock, for whom they don’t even have a photo. 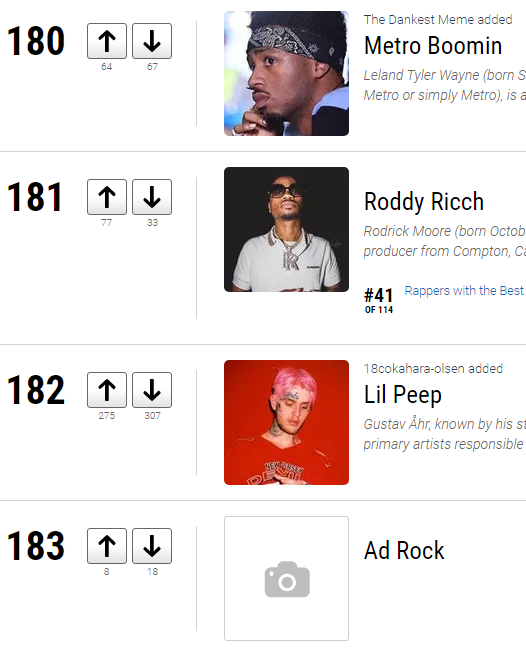 So disrespectful to Ad Rock

Meanwhile, Freeway is listed at 369 and his entry has a photo of DJ Drama.

That is not Freeway

I can’t do this anymore, so I’m just going to point out some entries not listed above that are so egregious that I can only list them with exclamation points:

This not only hurts my head, but also my soul.

Mahatma Gandhi once said, “What is really needed to make democracy function is not knowledge of facts, but right education,” and it’s clear that people that voted on Ranker’s list of the Best 100+ Rappers of All Time are in dire need of a Hip Hop education.

Republished from The Passion of Christopher Pierznik

Christopher Pierznik is the worst-selling author of nine books. Check out more of his writing at Medium. His work has appeared on XXL, Cuepoint, Business Insider, The Cauldron, Medium, Fatherly, Hip Hop Golden Age, and many more. Subscribe to his monthly newsletter or follow him on Facebook or Twitter. Please feel free to get in touch at CPierznik99@gmail.com.