“The Militia” is the second single off Moment of Truth, the fifth album by Gang Starr.

Moment of Truth was released on March 31, 1998, by Noo Trybe Records and Virgin Records. Gang Starr recorded Moment of Truth in sessions at D&D Studios. Released four years after its previous album, Hard to Earn, this album could be perceived as a comeback, with a newer, updated style of the group’s already-established jazz-tinged Hip Hop, as stated by Guru in the introduction. Lyrically, the album is more emotional and socially conscious than previous installments.

The album is the group’s most commercially successful album. Moment of Truth debuted at #1 on the Top R&B/Hip Hop Albums chart. It went on to sell over 500,000 copies and was certified Gold by the RIAA on May 7, 1998. The lead single, “You Know My Steez,” became the duo’s second Billboard Hot 100 appearance in 1997, peaking at #76. 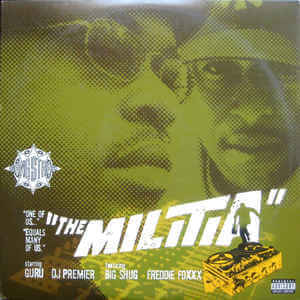