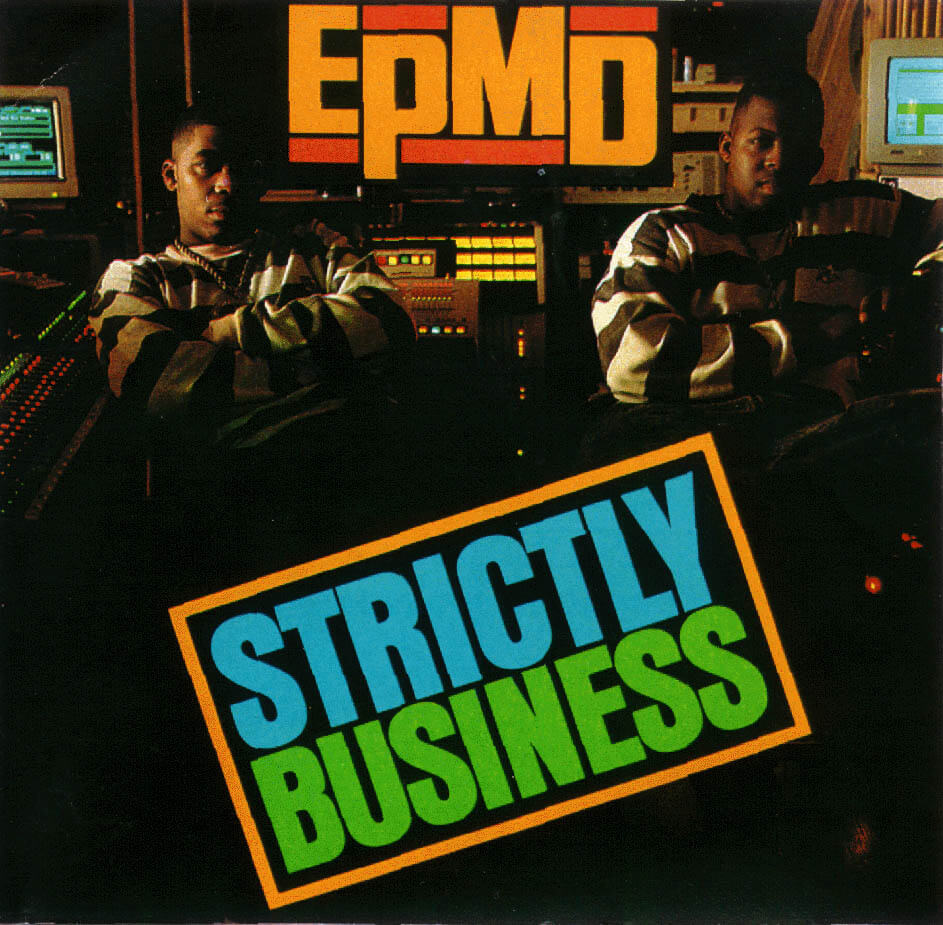 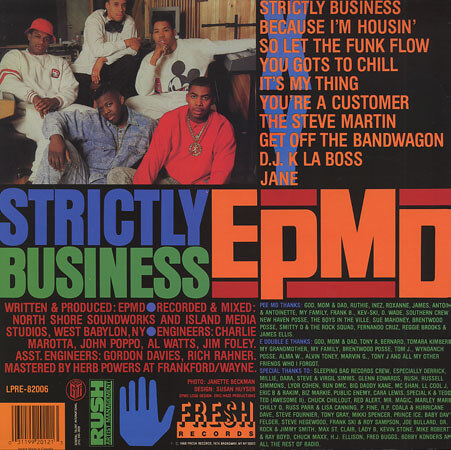 For those of us who remember 1988, it was the year that Eric B & Rakim, Public Enemy and Slick Rick (and several others) all had releases and woven in each one were lyrics that would reflect what was happening around them. New York was on a decline seemingly in a way, as drugs, guns, violence, vandalism, racial tensions, etc. were permeating its cities and became the topics in rap albums that year. While these legends were revolutionizing rap on a global level with heavy lyrics and thought-provoking concepts, a duo would emerge that would bring lighthearted, laid back, feel good rhymes.

This was the year that Erick Sermon and Parrish Smith would pair up and become EPMD. They would release their debut album “Strictly Business” and bring a whole different type of “revolution” to the industry. It was subtle. They incorporated elements in this album that didn’t SEEM to be anything different from what we would hear in the 80’s, but upon closer listen, we learn quickly that they brought a new approach and cemented this as a classic and game changing album.

This album earns its rank in the industry, with a short and to the point tracklist and as I mentioned, they brought something new that hadn’t been done quite like this. Samples became their forte and signature. Let’s get into it.

The first track is a true testament to what EPMD would become known for. Lighthearted, party anthems and it’s here that we see immediately where the sampling works in their favor. The debut single and title track “Strictly Business” uses Eric Clapton’s version of Bob Marley’s “I Shot The Sheriff” as the main chorus sample against the “Jungle Boogie” back beat. The scratching which we expect from the decade compliments the head-bopping dance feel of this song. They definitely meant it when they said “I knew I was the man with the master plan to make you wiggle and jiggle” in the first verse.

They didn’t disappoint. I challenge anyone to listen to this song and not sway to the beat of this track. They clever lyrics don’t stop there either. I’m a huge Star Trek fan so Parrish Smith’s Captain Kirk reference in the fourth verse makes me smirk when he says “Pulse rate descends, heart rate increases, it’s like beam me up Scotty”. This track is the epitome of feel-good, fun, banger and the chorus is the catchiest. Great way to start this!

The second track is great and I think the Aretha Franklin sample is interesting, but what I love most is that they would use the “EPMD is a world premier” line years later when they would release “Da Joint” (one of my favorite songs). I also love that Erick S. and Parrish S. play off of each other:

“Well let me tell you homeboy you are living foul, MC’s you know who you are”

“Cause you a star”

These two would become known for their fluidity and ease of lyrics between each other and I’d like to think it started here. This track isn’t as fun as the previous one, but it follows suit and gives us the laid back easy listen we want from them!

Some people would say EPMD is “monotonous” and I don’t agree that this is true overall, but I will say the 3rd track “Let The Funk Flow”, is probably where this notion is rooted. It’s almost like we got most of their energy in the first two tracks and they are somewhat deflated here. The Beastie Boys, The J.B’s and Otis Redding samples coupled with the ever so familiar scratching carries the track and maintains the overall feel good atmosphere it started off with. This isn’t my favorite track on the album, but the cleverly put together references like these, are definitely appreciated:

“I got my girls to keep me pumpin, just like Getty

Use the same fuel as Mario Andretti”

and then the BEST one…

“Cause when it’s time for some action

Do a spin grab my nuts, and start taxin..”

I’ll be a little forgiving with the lack of energy in this track because they definitely recover immensely in the next one. 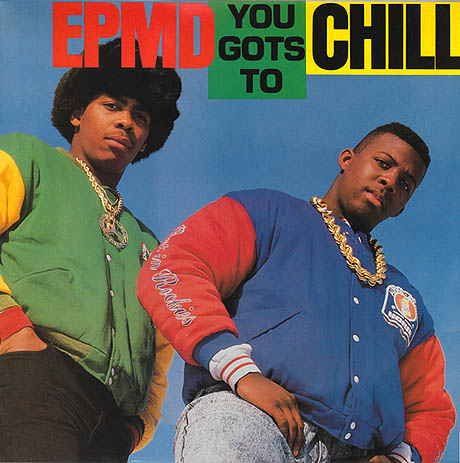 “You Gots To Chill” is the song that took the industry by storm. The second single off the album, this was well received from the jump. The samples are plentiful, but Kool & The Gang and Zapp’s would be the best part. This is where we see clear adjoining of genres, they bring electro-funk into this and they do it well. They use the beat to feed their energy and get us right back on track.

This song would also go on to be quoted and referenced by Snoop and LL in later years. The reason this one was so integral? We get the fluidity and ease of delivery and they do it in a “battle rap” style. This seems simple but in essence isn’t. I think the confidence in their dynamic is what makes the approach so successful, not to mention these guys are incredibly complimentary to each other. This track is largely to thank for the recognition this album received. These guys proved in 4.5 minutes that they are truly a legendary duo. I absolutely love it. 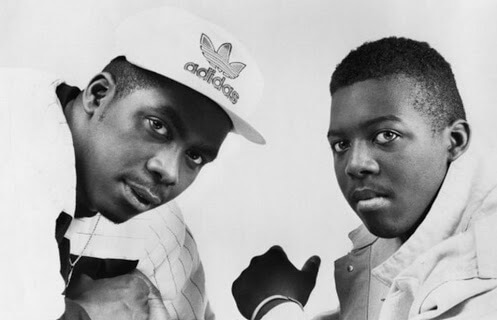 It’s at this point I’m discovering that Erick Sermon and Parrish Smith don’t have deep lyrics that leave you in your feelings or in a thought inducing state. They set out to create a banger album with feel good, goofy lyrics and they did it perfectly. These guys don’t stop, so at the midway point in the album we are graced with “It’s My Thing”. Now, what do I love about this song? The incorporation of Pink Floyd. That’s right, of the four samples, Floyd is one of them. Yet again, these guys manage to infuse their rap styles with rock and of course they executed it flawlessly.

This track starts off with a very familiar sound(a helicopter propeller) and gets right into the bounce, head bopping beat. And the lyrics are Hilarious! There is some clever rhyming laced throughout but what I find humorous are lines like this:

“Cause I’m the Thriller of Manilla, MC cold killer

MC’s cold clockin til the party’s through

Then they tap me on my shoulder and say, “This Bud’s for you”

This definitely speaks to the party atmosphere and laid back mood music. Next up, we have “You’re A Customer”. This one has a very dope beat. Of course samples are heavy and range as always: “Jungle Boogie” by Kool & The Gang is used again (we heard it first in “You Gots To Chill”) and we also have samples of The Steve Miller Band, which would be the psychedelic rock sounds they so brilliantly use and the DJ scratching ensures a Hip Hop vibe. As if that wasn’t enough, Hip Hop fans would hear influence in the future when  listening to “I Got 5 On It” by the Luniz. I can never stress enough how much I appreciate when my favorite rap songs reference each other. It’s engaging and keeps me hooked.

The next track is called “The Steve Martin” and it’s exactly what you’re thinking. It is an obvious reference to Steve Martin the comedian. Staying true to the “humor” in this album, this track encompasses all of that! From the jump Parrish gives us the narrative of Steve Martin’s movie “The Jerk” and like I said, EPMD had a clear concept with this album and they executed it well. Midway through the first verse he hits us with:

“If you seen the clumsy movie it was called The Jerk

He was doin freaky moves with his feet and head”

I don’t know if anyone has seen this scene in the movie that is being referenced, but it’s likely the inspiration for Elaine’s dance in Seinfeld, and it’s hilarious, and that’s just the beginning. The hilarity continues in the last verse, and I won’t even describe it I’ll just leave you with this…

As we near the end, we have the next track “Get Off The Bandwagon”. I’m not going to go in detail on this one, but rest assured that this follows suit and is fantastic. Everything is on point and consistent with the entire album because these guys don’t disappoint. What I want to talk about is the 9th track “DJ K La Boss”. I’ve said this before and I will say it again, the DJ’s in this decade were brilliant on the tables so every album needs a track that is devoted to their art. Public Enemy had one, Eric B and Rakim had one and now EPMD.

What sets this one above is they use Michael Jacksons “Thriller” as one of the samples. Phenomenal. Normally I criticize artists that use legendary songs as samples or remix them, but K La Boss does this justice. This is four and half minutes of straight talent. He is largely to thank for the success of this album because production and beats are on point from track to track. Once again, an absolutely perfect display of the 80’s signature beats, styles and scratching!

We find ourselves at the end of the album, and EPMD leaves us with “Jane”. Now two things about these guys is that every album would go on to have one track with the name “Jane” in it, and that goes along with every album having business in the title. Maybe that wasn’t planned out when they first made this album, but it’s a nice continuation over the years. Definitely interesting and extremely clever. I appreciate things like this immensely. It becomes a signature and a memory trigger.

Now about the track, this is the most lyrical we get on the album. It’s essentially a Hip Hop album staple. It’s seemingly a story about a sexual encounter with a female and samples Rick James’ “Mary Jane” as an accompaniment. What I like most about this track is the beat is secondary to the vocals. This is the one song you can clearly hear the dynamic and ease of delivery EPMD is known for. Once again, fantastic way to end the album and although the subject matter could have been elaborated for depth, these guys stayed true to their point and kept it light. Much appreciated.

And there it is, the ten tracks that created a masterpiece. Erick Sermon and Parrish Smith were the only 2 who could put together a solid album, be able  to incorporate rock into the genre differently than Run DMC, which paved the way for other artists to do this as well. EPMD relied heavily on samples and fantastic beat production. That’s why it was a subtle impact. I never understood why this album was so critical for Hip Hop, but as mentioned, its impact would be seen in the future and in many other emerging artists. These two have always been ranked amongst my favorites and in my opinion are to thank and praise for their contribution to classics. “Strictly Business” would be the start of a handful of other “business” related ventures… (Pun definitely intended).