One of their best-known songs, it reached no. 7 on the Billboard Hot 100 in the week of March 7, 1987, and was later named one of The Rock and Roll Hall of Fame’s 500 Songs that Shaped Rock and Roll. The song was also included on their compilation albums The Sounds of Science in 1999 and Solid Gold Hits in 2005.

The song, written by Adam Yauch and band friend Tom “Tommy Triphammer” Cushman (who appears in the video), was intended as an ironic parody of “party” and “attitude”-themed songs, such as “Smokin’ in the Boys Room” and “I Wanna Rock”. However, the irony was lost on most listeners. Mike D commented that, “The only thing that upsets me is that we might have reinforced certain values of some people in our audience when our own values were actually totally different. There were tons of guys singing along to “Fight for Your Right” who were oblivious to the fact it was a total goof on them.”

The music video for “Fight For Your Right” begins as a mother and father tell their two sons to stay out of trouble while they’re away. When they leave, the two boys decide to have a party, hoping “no bad people show up”; this prompts the arrival of Ad-Rock, Mike D, and MCA at the party. The trio starts all kinds of trouble within the house, such as chasing and kissing girls, starting fires, bringing more troublesome people into the house, spiking the punch, smashing things, and starting a massive pie fight. As the pie fight reaches its peak, Ad-Rock, Mike D, and MCA run away, the party having become too out of hand even for them. As the video ends, the remaining partygoers shout along to the final chorus of “party!” before hitting the returning mother in the face with a pie. (Wikipedia) 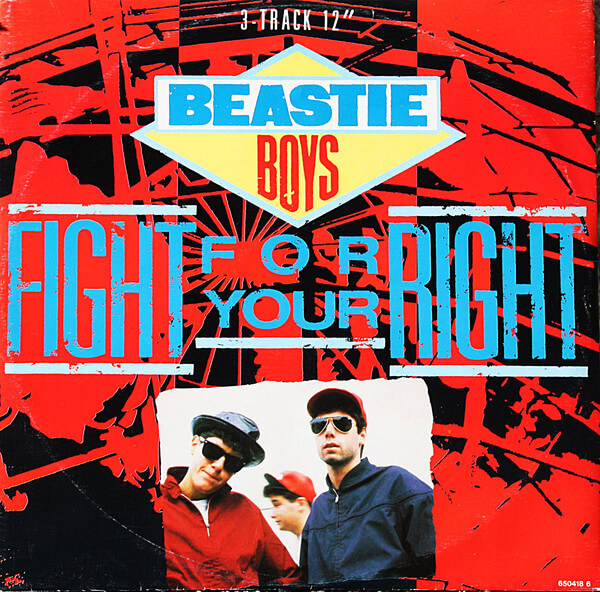