StillmaticSteph is a student of the Hip Hop culture. His first exposure to authentic Hip Hop was in the mid 90’s when a neighborhood friend put a dubbed 36 Chambers tape in his Walkman. He quickly fell in love with the 5 elements of Hip Hop and made friends with a Bay Area b-boy crew to get a better understanding of all the elements. He was often ostracized by the majority of his peers growing up for not being a fan of radio or gangster rap and would often get into heated debates over what music would get played in 6th period art class. This would serve as fuel to further his passion on supporting the real. 25 Plus years later and it’s still the center of his universe. 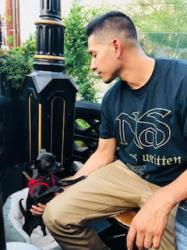 Since the birth of Hip Hop in the early ’70s, artists have been striving to master their craft. From b-boys to graf writers and everything in between, staying true to the culture and art is held in the highest regard. The 90’s in particular welcomed an onslaught of some of the illest spitters of all time. […]

The Bay. Overlooked and underappreciated in Hip Hop’s golden era and even today. In a region that is traditionally known for pimped out rhymes, parachute pants and the hyphy movement, the Souls of Mischief (SOM) and Hieroglyphics crew have been keeping it thorough for over two and a half decades for authentic Hip Hop enthusiast. […]

Inspectah Deck, The Rebel INS, Rollie Fingers, the Fifth Brother. For twenty plus years rough neck Inspectah Deck has been providing guest verses with the tenacity and hunger often reserved for newcomers to the game, positioning himself as one of the best feature providers in all of Hip Hop. From sharp bars, slick metaphors to […]