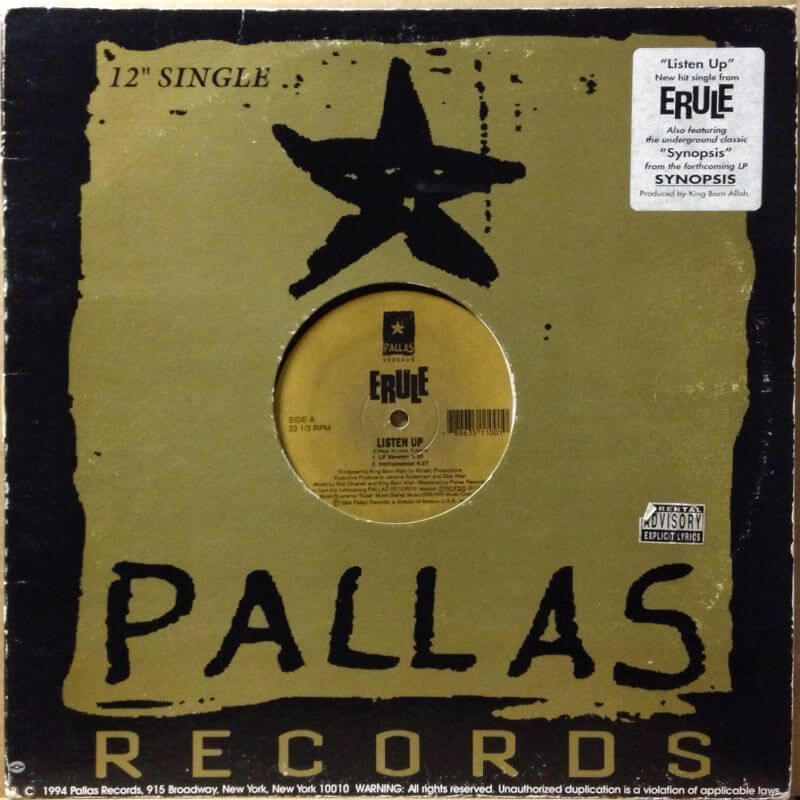 “I jot down in all and I do it all indeed I rock the whole jam, chumps know the program, identical to no man”

By 1994, the west coast had carved out a decent place in rap. NWA and Public Enemy helped bring the region to the forefront in the late ’80s. 2Pac and Snoop Dogg extended that commercial appeal through the early part of the ’90s. Still, Southern California lacked an MC with the lyrical dexterity that could rival what had already been developing for years on the east coast. Neither Compton nor L.A. had their Rakim, Nas, or Biggie. For a brief time in 1994, it seemed like that man could be L.A,-transplant, Erule.

Pallas records released the single “Listen Up” with “Synopsis” as a b-side in the summer of 1994. Producer King Born Allah borrowed the melody of Roy Ayers’ often-sampled “Everybody Loves the Sunshine”. The furious scratching on the track is indicative of the era, the culture wasn’t too far removed from its origins. Somehow all of this is topped by 48 ridiculous bars from Erule.

“I’m magnanimous, I grow like canibus, never animus
When I unfold, hope the next man don’t plan to bust”

If the words weren’t delivered so smoothly over this funky beat, it could easily sound like an excerpt from a dictionary or thesaurus. Erule displays a vocabulary that rivals rap greats like Black Thought and GZA. Who else do you listen to that can pull out words like anaphora, aura, diaphoretic, kinetic, transcribe, and comport in a rap song? Erule used them all correctly in the first verse alone. The best part is that it doesn’t feel forced. He’s performing hip-hop in its purest form He’s finding cool and unique ways to tell us how good he is and doing so in a very dope manner. Erule is effortless in his delivery and the ability to repeatedly change his rhyme scheme while staying on beat and controlling his breath.

It’s an absolute lyrical display for an MC largely unknown outside of the underground.

“I’m on the brink of blowin up, y’all
Examine hits however they fall”

Sadly, Erule never got his just due. He toiled away on a Pallas Records label that is now defunct. He became another MC from what may be rap’s most loaded era that never broke through commercially. While the song was spun regularly on Yo! MTV Raps and BET’s Rap City, it never took on a commercial level. Not even the song’s placement in the 1995 cult-classic film, KIDS, could help Erule in generating enough momentum to sign a major record deal. 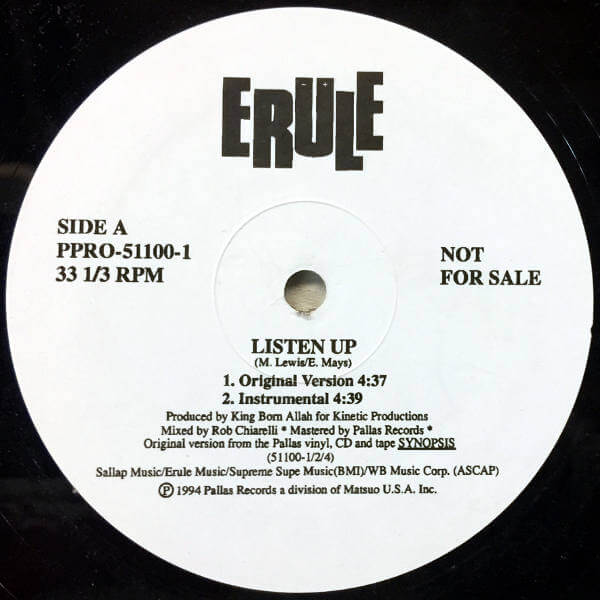 He kept a decent following in the underground and finally released an album (Cold Currentz) in 2001 under Flatland Region records, but his album with Pallas Records has still never surfaced after roughly 25 years. If we have nothing else from that time, we have the shortlist of records he made with the intentions of staking his place in Hip Hop besides the game’s most revered lyricists. The most notable being a track that tells us exactly what to do when Erule raps, “Listen Up”.

“I got the formula, I’m warnin’ ya the vibe be mad ill” 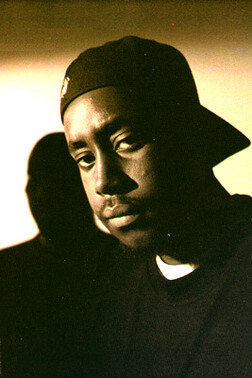