“La Raza” is a song by Kid Frost and featured on his debut album Hispanic Causing Panic.

“La Raza”, which is Spanish for “the race” or more symbolically “the people”, the song is featured on the soundtrack of Grand Theft Auto: San Andreas, playing on the West Coast hip hop radio station Radio Los Santos. The song reached #42 on the Billboard Hot 100 chart. It is also considered to be one of the first successful Latin Hip Hop songs. The song samples El Chicano’s “Viva Tirado” from 1970 (a cover of the famous Gerald Wilson jazz composition). 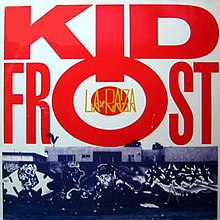