Entrancing on the surface and rife with meaning just beneath, Dennis Coles crafts flavorful vignettes of meticulous detail, so consumed with the minutiae of gang life and the flavor of a hot meal that he compels his listeners to hear the clap of each gun shot and burn their lips on piping hot Ziti. The veracity of his street tales made him a standout in the sprawling Wu-Tang Clan collective in the 1990s, but his early work seemed restricted by the group setting, begging for the freedom of a three-dimensional solo effort. Though 1996’s Ironman gave him room to breathe, it never possessed a singular vision, one that would define Ghostface Killah (Cole’s alter ego) as an artist outside of the shadow of the Wu empire. Luckily, patience and hard work provided Ghost with a second opportunity to separate himself from the pack and his seminal sophomore effort, Supreme Clientele, manages to capture his abundance of raw talent, delicately balanced with an ability to self edit and a renewed sense of compassion. It’s an enlightened and sophisticated work of art, painstakingly precise in its passion for language and triumphant in its separation from the superficiality of turn-of-the-century avarice.

Ghostface’s delivery is a nimble stream of rhyming suffixes, punctuated with a colorful specificity and decorative nuance, built for both narrative and linguistic gamesmanship. It’s a foreign and endless stream of food buzzwords and street crime colloquialisms upon discovery, but as a relationship develops, themes begin to unfurl, particularly in the newly-cultivated political bent and sentimentality. Investigating the dense and dazzling “Mighty Healthy” reveals an incisive analysis of racism, particularly in the ability of prejudice to morph a culture into its antithesis. Dispelling rumors that the black community is “immune” to the oppression surrounding them, Ghost takes aim at the malnourished, drug-addled stereotype masquerading as the visage of black America and urges an intellectual awakening.

The shrewd observations and invigorated confidence have even seeped into his moments of whimsy, resulting in “The Grain”: a splendid satire of celebrity, replete with ice-adorned Pope John Paul II and passionate Vanna White make-out-session. While a Whopper-eating, horny “Queen Mum” may step far beyond the boundaries of good taste, paralleling Malcolm X and John F. Kennedy’s assassinations and correlating sleep to the placement of a hyphen are the kind of epigrammatic writing choices that outweigh lapses in judgment, barring the far-too-frequent dalliances with homophobia. Thankfully, the artist is capable of seeing his own flaws and making amends, willingly leaving in a bit of botched dialogue here (“slaf-hash”) or positively comparing himself to Boy George there, reflecting a humility developing alongside the artistic growth. 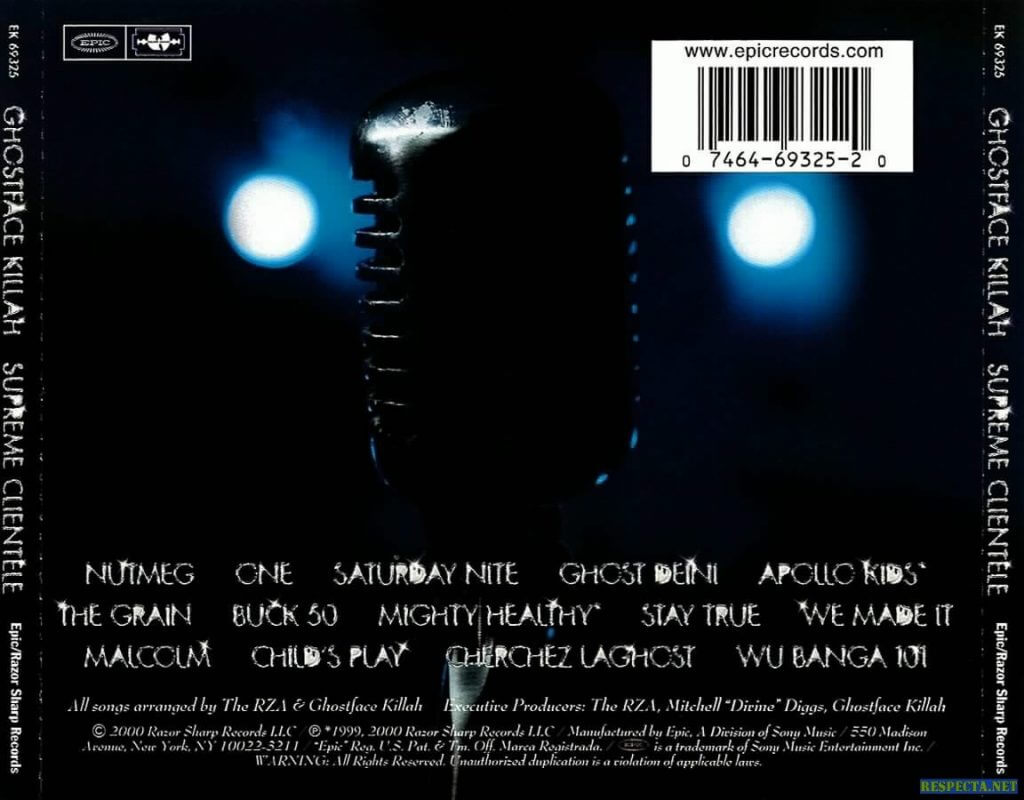 Overseeing the mixing and a lion’s share of the production work, RZA broadens his scope to match Ghost’s vision, but wisely maintains the cinematic atmosphere and low-tech grit of his oeuvre. Adorning the smoky rooms and rainy streets of Ghost’s Gotham with shimmering horn and spectral music box, the body of sounds delicately walks the line between majestic and ghastly, tingling spines with each infernal echoed note and break. Sampled elements are noticeably brief, even rushed, toiling to keep pace with the furious vocal work, stranded as transitory shudders and gasps of wind instrument and girl-group chorus. “Stroke of Death” takes this penchant for brevity to its apogee, dragging a needle over the surface of a record for every solitary second of the track’s length, resulting in a forcibly anti-commercial bit of agitation, almost liberating in its discomfort.

“Child’s Play” also rides a single, indecipherable note ragged, but sets an altogether different mood, turning the high-pitched into placid and balancing out the rough edges with a dollop of George Jackson’s rich, contemplative keys. A youthful, nostalgic tone is struck even before Ghost utters a syllable, captured in passing snippets of record scratch and half-heard 70’s guitar lick. Lyrical passages occupy the space between pleasant reminiscence and lingering melancholy, as Ghostface goes out on a limb to divulge the focus of his youthful sexual desires, sparing none of the adolescent embarrassment that comes with reproductive maturity. Revealed in a matter-of-fact patter, wholly unashamed, Ghost’s expounds on his carnal awakening, evoked by a brief glimpse of “Pretty Little Sally’s” panties as she swayed back and forth on a swing-set. The image resonated deeply, resulting in virtuous moments of experimentation and aroused daydreaming, temporarily removing Ghost from his humble surroundings, if only in his mind.

Examining one’s masturbatory habits is a foolhardy endeavor, but Ghostface’s execution and honesty is strikingly moral, especially in the juxtaposition between the inculpability of young love and the accountability, disappointment and jealousy of adult relationships. His experiences are highly subjective and seen through rose-colored glasses, but his yearning is universal and, no matter the topic (politics, religion, culture), Ghost succeeds in taking a dialectic approach, seasoning his words with lived-in realism and sophisticated exposition. It’s a refreshingly naked approach to a form far too interested in affectation and generality.

Ghostface Killah – Supreme Clientele was ranked #6 on Matt Deapo‘s Hip Hop Top 50, a ranking of 50 of the best Hip Hop albums recorded between 1978 and 2006, based on this consideration and these rules.