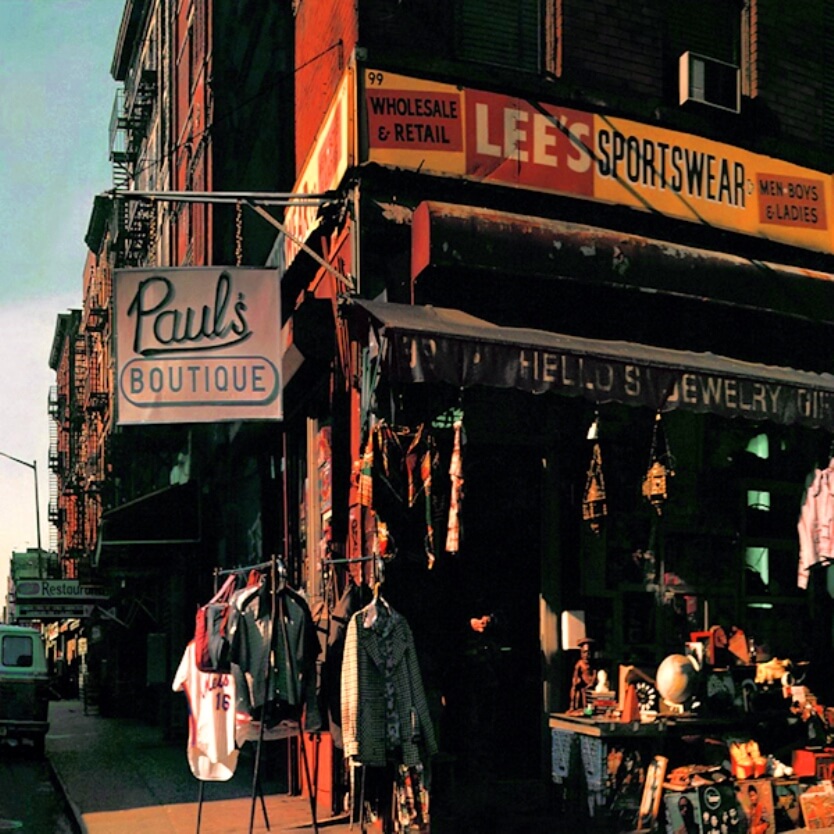 A love letter written in exodus, Paul’s Boutique glued the recollected pieces of the Beastie Boys’ New York City into a mosaic, teaming with the fragrant food carts and steaming sewer grates missing from their newly acquired, palm tree-lined Los Angeles headquarters. Packing their sonic suitcases with the auto-biographical detail of a Hemingway novel and the memory of an elephant, the Boys managed to ignore the animosity back home and impart their collective positive vibes into a project of immense sprawl, one with the broad ambition of a Beatles’ concept album and the contrasting intimacy of a secret diary. The sentiment was novel, particularly for a trio pigeonholed as derivative ruffians, but the experiment’s real ingenuity lies in its structure, building new compositions from thousands of nanoseconds of prefab sound.

The resulting piece pushed sampling to its inevitable extreme, morphing songwriting into multimedia art and transforming cultural influences from figurative to literal contributors. Tampering with the form also propagated a certain reckless abandon and danger to recycling culture, giving artists carte blanche to recontextualize the past without permission, foreshadowing everything from the homage fiction of Quentin Tarantino to peer-to-peer file sharing. That being said, none who followed shared the enthusiasm or resourcefulness of our whimsically gabby pranksters, particularly in the specificity of their vision and uncanny ability to pair highfalutin approach with humble craftsmanship.

Converting the art of rhyming from individual competition to team sport, the Beasties shape each bar into a game of call and response, vigorously mimicking their compatriot as he doles out superlatives or singing his praises as he steps away from the podium. The tone cluster created by the abrasive, cheerleader-style chanting inspires a rambunctious and jovial demeanor, mirrored through lyrical content rife with shameless self-aggrandizing and sexual hubris, studiously obscured by sitcom allusion or private joke. Conveying these cryptic footnotes in toto adds a layer of complexity to the writing, exposing a collaborative effort that functions as transmission from the unit and individual notion, imparting a fortuitous universality to every proper noun and neighborhood colloquialism. Despite the rigorous fidelity of idea, a certain lived-in comfortability permeates the dialogue, allowing the vocalist to go off script and birth the most peculiar of similes, shaped by a brand obsession in the spirit of Pop Art and the jokey wit of a Catskills comedy act. 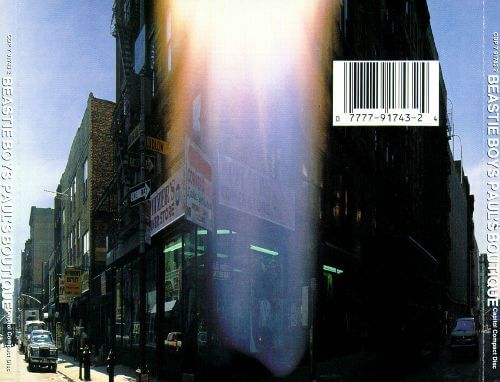 This jocularity, accompanied by MCA’s budding spirituality, cradles the tone of the composition, souring only for the rarest act of metaphorical aggression, benign enough in execution to treat handguns as props or abandon them entirely in favor of farcical armaments like bags of ice and egg-launching slingshots. Any vulgar display is in the name of role playing or tall tale, pouring itself into the tough-guy mold personified by Clint Eastwood and Steve McQueen, allowing posture to act as metaphor for group disgust towards racism, domestic violence and drug addiction. A certain paraphrastic glee is channeled through these gritty passages, seasoning the usual banality of street rap with frozen steaks atop puffy black eyes and rotten teeth circling the bathroom sink drain.

Marrying these lyrical eccentricities with the Dust Brothers’ capacity for auditory collage, rhythm is propelled by an endless stream of rapid-fire percussion loops and cultural paraphernalia, meticulously pasted into an army of jingles and asides, all vying for space at the aural buffet table. The resulting composition is frantic and adolescent in its enthusiasm, but never sloppy, utilizing the bombast and swagger of “wah-wah” drenched funk guitar to mirror the winsome attitude of the lyricists. Its deviations from beat lead to moments of pure spontaneity, reinforcing the anarchic nature of the project with sonic non sequitur (bong rips, didgeridoo, banjo) and extrinsic bits of dialogue, finishing rhymed phrases like a game of musical Mad Libs.

Non-verbal samples serve a dual purpose, acting as rhythm and accentuation of theme, lending the proceedings an air of classic cool through insinuated association. Cinematic urgency lent by “Superfly” and its rump-shaking low end elevate “Egg Man” from stoned hijinks to Robin Hood myth, painting the Boy’s childish capers as noble crusade, further exalted by misappropriated bits of Chuck D’s dogmatic poetry and Janet Leigh’s disembodied screams. This palpable menace and gravitas carries over to “High Plains Drifter,” which is imbued with the paranoid skittishness of cocked pistol hammer and sleazy bass line, transforming the jailbreak fantasies of vicarious outlaws into an erratic, flesh-and-blood manhunt.

The single most schizophrenic moment is “The Sounds of Science,” which functions as a patchwork of 3 distinct movements squeezed into one package, only coming up for air by way of incongruous reggae sample or scratch passage. The introduction methodically bounces on an oompa-loompa bass line and warped siren wail, drained of the momentum of the previous 5 tracks and punctuated only by infrequent piano key clank. The team vocally matches the bass in tone and speed, gently lilting along with bleary eyes, but never losing intent or purpose (“expanding the horizons and expanding the parameters”). Laconic lyrics are dropped in a sort of stream-of-consciousness, free poetry, reflecting on a variety of “ologies” and aligning the fruitful endeavors of Sir Isaac Newton and Ben Franklin to their own experiments in hip-hop genre bending.

Ad-Rock signals the terse half-time show with loud, echoed exclamations of dominance and viridity, leading directly into a lyrical lightning round of relentless speed and raging libido. This proclivity for prurience and penchant for wisecracks doesn’t change much for the coda, but the trio separates from formation to flex their individual abilities, highlighting personal preoccupations. Eagerly springing into action, Mike D’s verses are as brash and foolhardy in construction as the warring Beatles samples they waltz upon, morphing a night of wine and women into a “freak unique penetration,” drunk on a litigious brew of jaunty John Lennon guitar solo. MCA is just as enamored with the promiscuous and pernicious, but far more introspective, stressing epicurean taste over frugality in a life of indeterminate length. His capacity for debauchery and frivolity certainly matches that of his brothers in arms, but certain sacred cows remain untipped (i.e. illicit white powders), masterfully elucidated through a jarring cut to Pato Banton’s paean to all things “sinsemilla.”

As capricious as it is, boundless eclecticism and progressive thinking were bleeding edge in 1989, cutting far too close to the bone with fans unwilling to indulge in self-satire or fetishized 70’s kitsch. With the progression of technology and society’s ever-increasing cultural gluttony, artistic quotation has become ubiquitous and the once sophomoric and indulgent has become prophetic and revolutionary, inseminating everything that would follow and spawning a creative community of enthusiasts keen on making their work reflect their passions and existence.

Beastie Boys – Paul’s Boutique was ranked #1 on Matt Deapo‘s Hip Hop Top 50, a ranking of 50 of the best Hip Hop albums recorded between 1978 and 2006, based on this consideration and these rules.