clipping. “There Existed An Addiction To Blood” 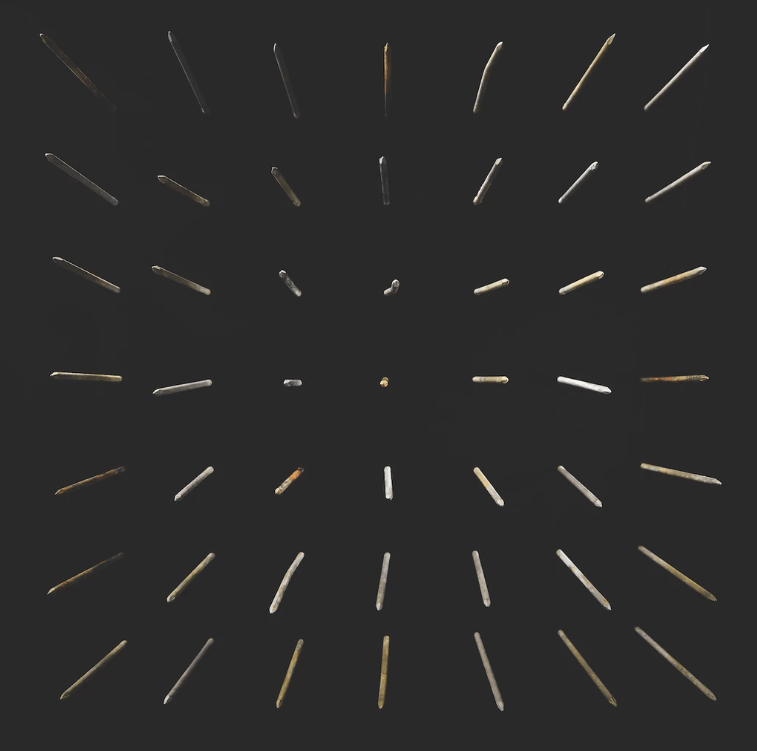 The science-fiction visionary Octavia Butler once declared that “there is nothing new under the sun, but there are new suns.” The aphorism could apply to any art form where the basic contours are fixed, but the appetite for innovation remains infinite. Enter Clipping, flash fiction genre masters in a Hip Hop world firmly rooted in memoir. If first-person confessionals historically reign, the mid-city Los Angeles trio of rapper Daveed Diggs and producers William Hutson and Jonathan Snipes have spent the last half-decade terraforming their own patch of soil, replete with conceptual labyrinths and industrial chaos. They have conjured a mutant emanation of the future, built at odd angles atop the hallowed foundation of the past.

Their third album for Sub Pop, There Existed an Addiction to Blood, finds them interpreting another rap splinter sect through their singular lens. This is clipping’s transmutation of horrorcore, a purposefully absurdist and creatively significant sub-genre that flourished in the mid-90s. If some of its most notable pioneers included Brotha Lynch Hung and Gravediggaz, it also encompasses seminal works from the Geto Boys, Bone Thugs-N-Harmony, and the near-entirety of classic Memphis cassette tape rap.

The most subversive and experimental rap has often presented itself as an “alternative” to conventional sounds, but Clipping respectfully warps them into new constellations. There Existed an Addiction to Blood absorbs the hyper-violent horror tropes of the Murder Dog era, but re-imagines them in a new light: still darkly-tinted and somber, but in a weirder and more vivid hue. If traditional horrorcore was akin to Blacula, the hugely popular blaxploitation flick from the early 70s, Clipping’s latest is analogous to Ganja & Hess, the blood-sipping 1973 cult classic regarded as an unsung landmark of black independent cinema, whose score the band samples on “Blood of the Fang.”

From the opening “Intro,” Clipping summon an unsettling eeriness. Diggs sounds like he’s rapping through a drive-thru speaker about the bottom falling out, bodies hitting the floor, and recurrent ghosts. You hear ambient noises, footsteps, and shovels. The hairs on your arms stick up like bayonets. You can practically see the knife’s edge, sharp and luminous.

Each song contains its own premise and conceptual bent. There is “Nothing is Safe,” a reversal of Assault on Precinct 13, where the band creates their own version of a John Carpenter-inspired rap beat and the cops are the ones raiding a trap house. Diggs sketches the narrative from the perspective of the victims, full of lurid and visceral details and intricate wordplay. The windows are boarded and sealed, the product simmers on the stove, the bodies sleep fitfully in shifts. Then law enforcement arrives and the bullets start to fly.

“He Dead” turns police officers into werewolves while Diggs flips Kendrick Lamar’s “Riggamortis” into something gravely literal.“All In Your Head” finds Clipping re-contextualizing the pimp talk of Suga Free and Too $hort into a metaphor for an Exorcist-style possession. The album contains interludes featuring hissing recordings of demonic invasions and guest appearances from Griselda Gang’s Benny the Butcher and Hypnotize Minds horror queen La Chat. Other tracks feature contributions from noise music legends The Rita and Pedestrian Deposit. It all ends with “Piano Burning,” a performance of a piece written by the avant-garde composer Annea Lockwood. Yes, it is the sound of a piano burning.

In the hands of the less imaginative or less virtuosic, it could come off as overwrought or pretentious. Instead, Clipping annex new terrain for a sub-genre often left for dead. In its own way, one could compare what they’ve accomplished to Tarantino’s post-modern reworkings of critically overlooked but creatively fertile blaxploitation, horror and spaghetti western cinema.

Everything fits neatly into the broader scope of the band’s career, which has seen them expand from insular experimentalists into globally recognized artists. Since the release of their first album in 2013, Diggs has won a Tony and a Grammy, as well as co-written and starred in 2018’s critically hailed Blindspotting, while Snipes and Hutson have scored numerous films and television shows.

Clipping’s last album, the 2016 afro-futurist dystopian space opus Splendor & Misery was recently named one of Pitchfork’s Best Industrial Albums of All-Time. Commissioned for an episode of “This American Life,” their 2017 single “The Deep” became the inspiration for a novel of the same name, written by Rivers Solomon and published by Saga Press. But it’s their latest masterwork that embodies what the band had been building towards — a work that finds them without peer. This is experimental Hip Hop built to bang in a post-apocalyptic club bursting with radiation. It’s horror-core that soaks up past blood and replants it into a different organism, undead but dangerously alive. It is a new sun, blindingly bright and built to burn your retinas. 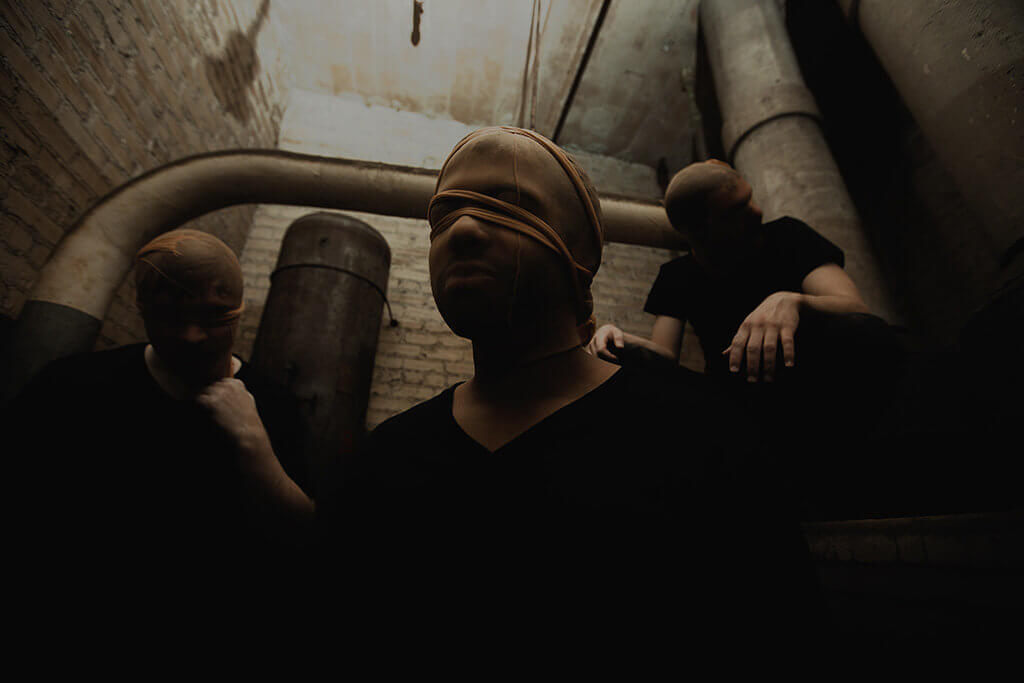 HHGA’s Review: There Existed an Addiction to Blood is… something else. A hate-it or love-it album without a doubt, this one either resonates with you, or it doesn’t – this is no easy-listening bubblegum fluff. Embracing horror as a theme, There Existed an Addiction to Blood is an exercise in exploring genre-boundaries. The album blends ambient, industrial, techno, noise, and Hip Hop into a unique mix, the horror-core theme adding to the dark and hallucinatory vibe that is consistently maintained throughout the whole album.

Clipping rapper Daveed Diggs may be better known for his acting, but here he once again proves he is an exceptional lyricist as well. His strong and at times brutal lyrical imagery perfectly suits the eery beats, to create an intense and claustrophobic atmosphere all the way through the album. Highlights are but not limited to “Nothing Is Safe” (the first song and perhaps the most accessible track on the album), “Blood Of The Fang” (check out the video too), “All In Your Head”, “La Mala Ordina” with Benny The Butcher and Elcamino (the two-minute harsh-noise outro is hard to listen to though), “Club Down”, and “Attunement” (with its chaotic soundscape a perfect last song leading the unconventional outro).

The album runs for 68 minutes, but the outro – “Piano Burning” – is an 18-minute field recording of…. well, a piano burning. Nobody will likely listen to this track multiple times, but the inclusion of “Piano Burning” as an outro makes sense somehow – just listen to this album with your headphones on, in the dark, and then let the whole thing digest while listening to “Piano Burning” – you’ll be in for a strong and unsettling meditative experience without a doubt. So: There Existed an Addiction to Blood is an album to REALLY listen to, and less suited for just having it playing in the background during your daily activities. It works best if you allow yourself to be immersed in it to let a chilling feeling of unease get under your skin. 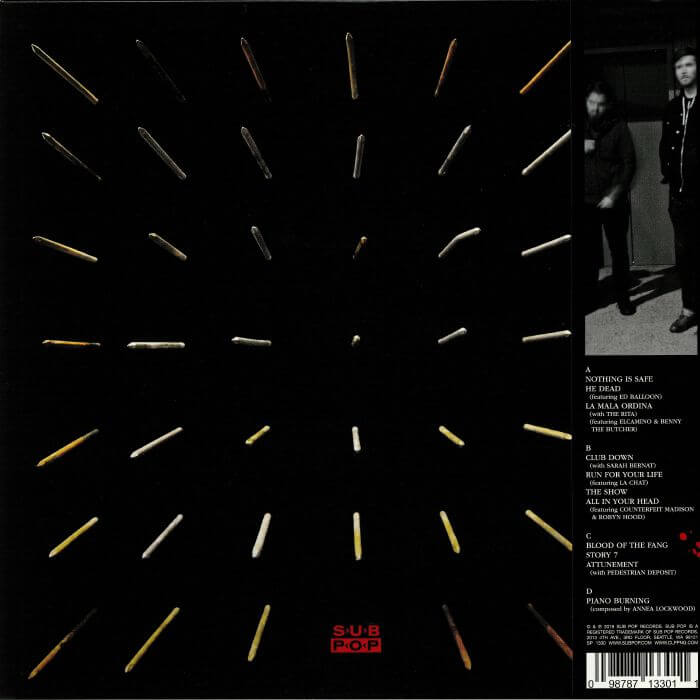 Gang Starr Announces Historic New Album ‘One Of The Best Yet’