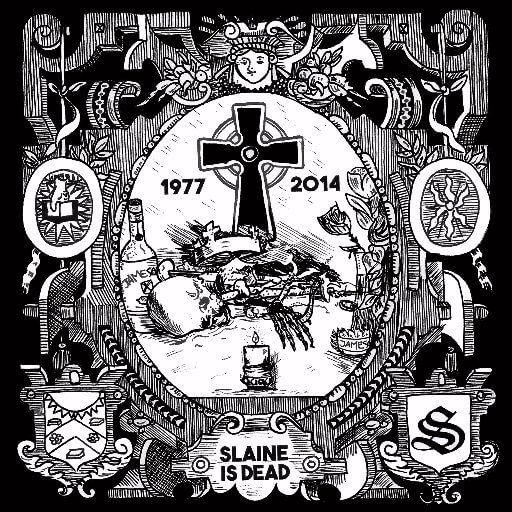 It focuses not on his success, but more so walking out of his darkest hours and confronting his failures. In a career marked by dark lyricism and introspection this project is both, but also finds Slaine exploring hope, faith and courage. He never abandons his roots, but gives us a new perspective on old themes.

Slaine is no stranger to success. The Boston-native has had movie roles alongside A-list stars such as Ben Affleck, Brad Pitt, Ray Liotta, Harvey Keitel and most recently Dwayne “The Rock” Johnson and Kevin Hart. He’s made records with Hip Hop legends DJ Premier, Cypress Hill, Action Bronson, Snoop Dogg, Statik Selektah, Raekwon & U-God of Wu-Tang and was a founding member of the super-group La Coka Nostra with Everlast, DJ Lethal, Danny Boy of House of Pain, and Ill Bill of Non-Phixion. Slaine has landed four albums in the top 20 on Billboard’s hip hop chart since 2009 both as a solo artist and with La Coka Nostra and has appeared in nine films in the same time span.  He’s achieved heights that most only dream of, not only in Hip Hop but also in Hollywood.

As an emcee, Slaine is known for his ability to tell dark stories and take listeners into a world of drugs, violence, love, loss, pain, dreams and nightmares. He has drawn from that same well to bring authenticity to some of best crime dramas of this generation. Slaine fast became a blue-collar hometown hero and was stepping off movie sets, tearing down sold out live shows, and working in studios until the sun came up. But part of what made his storytelling and performances so realistic was that they were inspired by his own reality and created from the center of a drug epidemic that he was fast becoming a casualty of. As his success grew, the same things that served him so well creatively were destroying his personal life and quite literally killing him. Financial ruin, emergency room visits and public blow-ups began to overshadow the talents that had given him such a promising career and the walls were closing in all around him. On March 2nd, 2014, at the end of an ugly bender, Slaine decided that enough was enough and on the 3rd day of March he started his journey in sobriety. He has not had a drink or a drug since.

His personal life slowly, but surely, started to regain traction when he stopped drinking and using drugs, but there were still doubts as to whether or not a return to form creatively would follow. And though he did release The King of Everything Else at a time when he was already six months sober, the album was a drug-fueled rampage which was already recorded during the end of his using. Early sobriety studio sessions with producer The Arcitype would end abruptly, as discomfort set in and writer’s block was an issue for Slaine for the first time in his career. The following two-years would be a daily exercise in regaining confidence and finding his way back through a livelihood that was littered with trap doors and vivid memories of the habits that led to his demise. The result of his daily practices rendered a series of projects, the first of which comes early this fall.

On September 23rd Slaine returns with a brand new, eight track EP, Slaine is Dead.  It focuses not on his success, but more so walking out of his darkest hours and confronting his failures. In a career marked by dark lyricism and introspection this project is both, but also finds Slaine exploring hope, faith and courage. He never abandons his roots, but gives us a new perspective on old themes. He vividly depicts the life of a drug dealer on “Pusher”, shares his drive since childhood to make his mark on “Legendary” and ultimately finds salvation on “Coming Home”.  He calls on long time friends and collaborators, Vinnie Paz, Ill Bill, Statik Selektah, Termanology, Demrick DJ Eclipse and Rite Hook for support on the record, and adds an unlikely collaboration with vocalist, Jared Evan. With the help of fellow executive producer and beat-smith, The Arcitype, Slaine Is Dead has achieved a sound that is gritty, polished, and moving; and Despite the EP’s title, this project marks a true and definitive rebirth for Slaine.

Today, Slaine unveiled the first video, “Pusher,” from his forthcoming Slaine Is Dead EP with Ambrosiaforheads.com.  “For years I’d try to get sober and couldn’t” Slaine confessed to Ambrosiaforheads. “Often times I would break down in the studio and relapse because I couldn’t write anything. The second I had a drink, or a drug I was writing verses in 20-minutes. The lyrics would come to me faster than I could write them. I would go on benders in the studio and record material the whole time. This time I was so desperate to get off the drugs and alcohol that I had to be willing to give up music. The two were so closely tied together that I couldn’t do one without the other. Deep down I had doubts that I’d ever be able to do this again. You think getting sober means everything gets easier, but ironically some of the skills applied while intoxicated require re-learning and re-mastering.”

Slaine went on to add “apparently, two years is a long hiatus between albums in the Internet era. I had people coming up to me on the streets asking me if I still rap. I think the assumption was that I had just moved on to acting. I still do both, but the truth is with the music I had to start from scratch again. It was like someone who had been in an accident learning how to tie their sneakers again and walk and finally get integrated back into society. I just kept chipping away a day at a time trying to make a little progress every day. When I looked up I had four projects pretty close to being done.”

Watch the video for Slaine’s Pusher”: