What’s good everyone?! Glad to see you hanging with me yet again. These lists have been controversial, yet engaging and I definitely feel it is good for us Hip Hop lovers and junkies to be involved in healthy discussions concerning Hip Hop.

This week, the list will be the most anticipated albums of the year. There are lots of projects that we’ve been waiting on for years that may actually see the light of day. These are albums that are either confirmed or pretty much confirmed.

With that being said, let’s get to it all shall we?

After releasing one of the year’s single best albums, and his best album in years with Tetsuo & Youth, he’s getting prepped to released not one, not two, but THREE albums this year before releasing his final studio album The Cool 2 in 2017.

One can hope that he’ll continue the momentum left over from his mesmerizing album of 2015. Still going strong after nearly thirty years non-stop, the legends of De La Soul will release their Kickstarter-funded ninth new album, And To the Anonymous Nobody, and it’s slated to be the biggest album of their illustrious careers.

With reported guests such as Usher, Snoop Dogg and others, De La will attempt to recreate another wonderful album that will make them as important they were when they released prior classics like 3 Feet High & Rising and De La Soul Is Dead. The only representative to rep the South from the TDE camp delivered a very damn good album with his “EP”, Cilvia Demo. With this promising debut, eyes are now on this young Tennessee native to deliver a very formidable debut full-length album, and with the high-level success his team is having, who’s going to bet against him? Within a span of a year and a half, Jermaine Cole went from a very dope emcee on the Roc Nation label to one of the most important fixtures in all of the game.

Although hitting Gold with his first two releases of Cole World and Born Sinner, he made history with 2014 Forest Hills Drive, as he went Platinum with no features, and considering how grossly under-promoted it was, this was something very magical and special.

He and good friend, Kendrick Lamar, put out a “Black Friday” mixtape that hinted at him dropping this year and this is very true.  While there’s no truth to the highly awaited Cole & Kendrick collab album, we can still rejoice to the return of one of the game’s true lyrical leaders. The legend himself returns in 2016 with two projects. Later this year, he’ll drop his final Def Jam full-length album before focusing all of his energy on his new label Mass Appeal, which hosts the likes of Fashawn, Run The Jewels, and Dave East.

His last effort, Life Is Good, was strictly for the grown folks, and showed the maturity we knew Nas was growing towards as an artist approaching the big four (that’s forty years of age for those that don’t know). He continued to show why he was and is the best.

Once he leaves Def Jam, he’ll FINALLY be able to put out his long-awaited sequel to his very highly acclaimed Lost Tapes album, which will surely be filled with unreleased, unheard jewels that continue to show why Nas is far and away one of the greatest emcees ever seen and heard.

TDE’s ScHoolboy Q delivered his long overdue commercial effort, with his nearly platinum major label debut, Oxymoron. Now in 2016, the pressure is on for him to present a thorough follow-up to that very good album, but based on prior releases like Habits & Contradictions, that really shouldn’t be too hard of a challenge. Uh-oh!!!  The most vicious tag team in Hip Hop right now is El-P and Killer Mike, and they’re on their way back.  After delivering some of

After delivering some of Hip Hop’s most unbelievable releases in a decade or two, the socially commenting, anti-establishment duo is getting set to drop yet another exceptional piece of angry, fuck you Hip Hop. This may be a task after dropping two undisputed classics in their self-titled debut and RTJ2, but knowing these two, this will be another mission that will be successful. Talk about an album we’ve been highly anticipating, this has been in the works since just before Ghost‘s Fishscales album, and that was back in 2006.  The combo of Ghost’s off-the-wall rhymes with DOOM‘s equally off-the-wall yet strangely melodic production made for possibly Hip Hop’s newest formidable tag team. However, with the exception of two released songs by them, nothing surfaced.  Things may have changed now, as Ghost recently stated that DOOM is willing to put the album in February.

Let’s really hope that surfaces, as we’ve hit the ten-year mark since the first announcement of the collaboration. The Four Horsemen of Hip Hop are putting the final touches to their highly awaited follow-up to their Shady Records debut, Welcome 2: Our House.

Seen industry-wide as the most feared lyrical supergroup in all of Hip Hop, this album will pack an even harder punch than their dope, yet slightly underwhelming debut. This will not only be executive produced by label boss, Eminem, but also DJ/producer extraordinaire Just Blaze as well.

With each doing their own projects leading up to this, the stage is set for a monstrous album, and quite possibly one of the most insane projects all year. 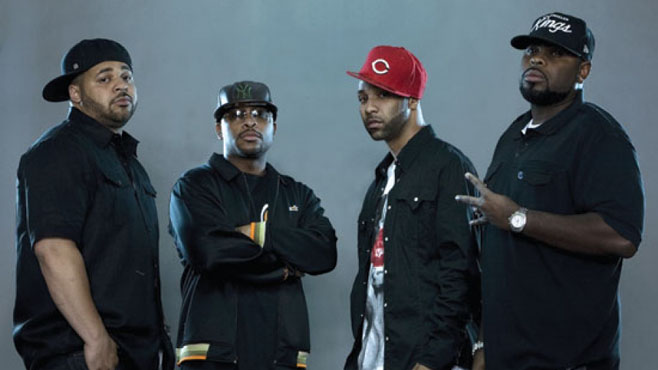 TDE’s residential conscious thinker (besides Kendrick) will be dropping his follow-up to his 2014 effort, These Days, which spawned the excellent cut with Action Bronson, “Stigmata”.

Known for deep beneath the surface-type tracks, hopefully this will be a better project than the blatant urge to go more commercial like These Days attempted to do. While his album, Control System, stands as his best effort to date, there’s no reason why Soul won’t attempt to make an album as good if not better. Overcoming health issues and bouts of depression, the Grammy Award winner is finally returning with her first album in eleven years.

Delivering the funky, uptempo cut with Pharrell, “WTF”, it’s good to see the innovator back in the game again, and here’s to her reinventing the game once again. Wu-Tang‘s most prolific emcee is returning with quite possibly another very busy year.  Besides dropping the aforementioned collab album with MF DOOM in February, he’s also finishing up the much-anticipated sequel to his undisputed best album ever, the gold-selling Supreme Clientele.

Attempting to recreate the unmatched magic that the first one presented, hopefully all his samples are able to be cleared and we’ll have an album that, much like the first, will be talked about another twenty years from now. Since then, he’s dropped dope albums such as Aziatic, A.W.O.L. and Pieces Of A Man. All of which have been decent to fantastic, but none have had the fluidity and cohesiveness as his debut. On the twentieth anniversary of his debut, he attempts to recreate the essence of it, and as talented as he is, my odds are on him to do it. On a commercial level, nobody in Hip Hop is hotter than Aubrey Drake Graham. No matter how you see him, even if he is one of Hip Hop’s more polarizing fixtures, he’s the IT guy of the game.

Never selling less than platinum in his brief yet impressive career, he has made history and broken records with his success. Last year’s mixtape, If You’re Reading This, It’s Too Late, went platinum in no time and spawned hit after hit after hit. He later dropped a collab mixtape with Future with What A Time To Be Alive, which just hit gold status.

While subsequently slowing down the career of rival Meek Mill and having issues with label boss Birdman as well as with Lil’ Wayne, he found time to record his much-anticipated full-length follow-up to his Grammy-nominated Nothing Was The Same.

Expected to drop any time now, here’s to possibly another incredible year for the young Canadian. The almighty Yeezus himself is finally ready to drop his next album and take Hip Hop to yet another level.

Regardless on how you feel about the man and his ego, he’s one of the single top stars in all of music, and the anticipation of this album is reaching climax levels. He recently dropped the Ty Dollar Sign-assisted “Real Friends”, which is being heralded as one of his best cuts in years, and a brief tease of his collab with Kendrick Lamar “No More Partying In LA” (over an AMAZING Madlib beat).

As to whether or not this makes the final version of the album, along with prior released singles such as “All In” with Thelonious Martin, remains to be seen. What is known is Mr. West is back, which means the year could very likely belong to him. What a hell of a way to end 2015 then when Pusha dropped the “prelude” to his forthcoming King Push album then his ten track monster, Darkest Before Dawn. Heralded everywhere, the newly crowned President of G.O.O.D. Music is set to drop the real thing in April and Darkest Before Dawn was ANY indication as to what we’ll be seeing, expect one of the year’s most formidable releases, bar none. The Brick City native is back to his hungry self. He dropped his Mudface EP near the end of 2015 and showed that he was lyrically focused now as he was when he broke in the game in ’92. He has stated that this was virtually a tease for the sequel of the album that is considered the magnum opus of his discography. It’s good to hear ol’ Reggie again, and we can be assured that this will be a firestarter and a return to his gutter greatness. Detroit’s quirky, yet very talented, Danny Brown last dropped a project in 2013, which was the fairly enjoyable Old.

Now in 2016, D-Brown is primed and ready to push the envelope with sexually exploitative, drug-infested, occasionally introspective rhymes.  There’s no doubt the D will be aiming to dominate, with rumored releases from Eminem, Royce Da 5’9, and Black Milk, this cat here is sure to be among the ones looking to do the ass kicking. This supergroup is scary.

The brutality of Bumpy, the viciousness of Trick, and the in-your-face aggression of Treach (mixed with the entire album produced by super underrated producer Nottz) makes for one of the game’s most intriguing projects.

All three men are vets of this industry and you can expect some of the most hard-hitting Hip Hop all year with this one release. The thought of this gives me chills, and I can’t wait, and neither should you. Last seen with Skyzoo dropping the excellent album Barrel Brothers, it’s once again his time to shine, and with help from Pete Rock, DJ Premier, and Jahlil Beats, this is another step in the positive direction for the highly talented emcee. This will clearly be another monumental year of Hip Hop. It’ll be hard to follow the past two years, but I’m optimistic just based on this list alone that this will be a year that will we’ll be talking about many years and eras from now.

Who are you looking forward to hearing this year? There are lots of projects we hope will drop, but I would regardless put my money on an interesting year. Strap up and get ready for the ride.