New York, as the rap mecca, has always been a brutal, bloody breeding ground for some of the dopest emcees the world has ever heard. To get to the point where the world heard you took maximum effort, supreme skill, and a whole lot of luck. The best of the best rose to the top – see Biggie, Tribe, Mobb Deep, Wu-Tang, etc (you get it). Some with equal skill for one reason or another never really took off. The world had the opportunity to hear them if they scratched the surface enough, but it took digging. Here are 5 of the dopest groups to do their thing without ever getting the recognition they deserved. Like Will Hunting, these dudes were wic-ked smart! It takes a math degree, knowledge of Greek mythology, understanding of physics and geometry to understand half the shit they’re saying. But they did it so cool like and fresh sounding. Think I’m playing about them being smart – well I’m not. Siah would leave rap to get a doctorate from Princeton and is now a Professor at Dartmouth. (See, http://www.tabletmag.com/jewish-arts-and-culture/music/70204/make-some-noise).

Back to the track, the chorus is unforgettable. The first line and second line both rhyme internally and it’s repeated which makes it catchy. The lyrics, on the other hand, are dense but with moments that pop out such as when Siah raps, “I scale the walls like fish/Bringin the mix from across the river Styx/For decipherin like the matrix/In the annals of rap, I want the dog-eared page/Nothing less than that, plus a whole lot more.”

Yeshua Da Poed (later just Yesh) comes in with his own fire lines, “Listen and remember, MCs who render empty compositions tend to/Start rappin like Christians at the end of December/Called upscience to make a deal/Permittin my defiance at gravity in Hip Hop.” 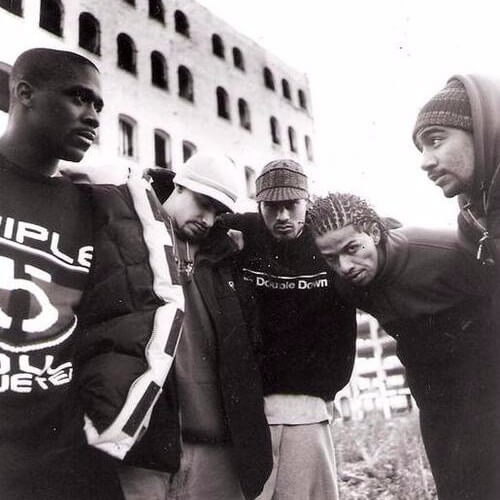 Probably the most critically acclaimed, and commercially successful, of all the groups listed here, the Arsonists went on to do alright when they released their album, As the World Burns, which charted at 78 on Billboards R&B/Hip Hop charts. Before that the Arsonists were tearing up open mics and cyphers when New York radio caught wind of the Session. A simple old school style call and response hook leads into the 5 lyricists just rhyming their asses off. They had it all. They had dope, smart references, wordplay, they could be catchy (check the Urkel line), and they played off  each other real cool like.

The track would later be included on the As the World Burns album, slightly revised, and the group would undergo various transformations. Apparently, in 2013 they started working on a new album but it has yet to see the light of day.

This song regularly comes in and out of my top 10. Nothing poignant is being said here. It’s the typical I rap better than you and I’m gonna prove it with clever metaphors, similes, wordplay, and dope rhyme patterns (Sometimes I wish I could stop the world and step out/of it/Kick it off it’s axis and stagger these rappers off balance/but instead I challenge, by pouring advanced skills by the gallons”). But it’s the way it’s delivered – the style here creates substance.

Listen to the way A-Butta kicks the last verse. Multiple syllable rhymes with rhymes within bars and all done so silky smooth, A-Butta words are like skiing on butter with plastic soled shoes. His lyrics are in perfect time with the beat with no hiccups. I honestly come back to this track now for one very good reason. I like the rap being made now – a lot. I’m not some angry Joe Budden type, not even close. But rap has changed and A-Butta said something that stands true for me – “Hip Hop is sure to change, and when it does I’m sure my name/Will probably run through your vein, I shine like polyurethane.” It runs through mines man, for real. Personally, I like the remix a lot better but this track released in ’96 off the vinyl only album of the same name featured two emcees who were crazy respected. So respected that even El-P of Run the Jewels and Company Flow fame teamed up with them to form the group Indelible MC’s. I’m not sure what happened there. My boy Aaron believes El-P couldn’t handle not being the best emcee in the group.

The ’96 album got re-released in 2003 as Re:Release making it much easier to find for collectors. Clear Blue Skies is a story about a white father speaking to his son about dating a black woman which exposes the many ridiculous generalities that create hate in a person. They released another album in 2006 but other than the underground classic Clear Blue Skies, we never again got to see the promise that was in that first album. The second track to be featured on the original Lyricists Lounge comp (which if you haven’t heard it is a CLASSIC) was from rappers Punchline and Wordsmith, who went by Punch & Words. Lyrically the duo could deliver metaphors and hilarious lines like no other. Check Punchline’s first verse when he spits, “What you had in store for us was looted, your music makes me sick/so I stay in bed and drink a lot of fluids.”

The two would team up with Masta Ace to form the group eMC, be featured on the Love Movement and Black Star, and release their own self-tilted EP but they were probably best known for ripping ciphers. While you think Da Cipher was just a song, it’s probably more appropriate to think of it as an autobiography of two rappers who ripped mad ciphers only to have some wack rapper try to step in.

"And Hip Hop gave me the way and something to say/And all I took in return is a second look" Atmosphere - Party for the Fight to Write I love Hip Hop. I don't want to just consume it and then look again. I want t…

Story Times: The Art Of Storytelling

In Appreciation Of: Sticky Fingaz