“On the Run” is the second single from Kool G Rap & DJ Polo’s third album Live and Let Die. Released with “Straight Jacket” as a B-side, it was later also featured on the compilation albums Killer Kuts (1994) and The Best of Cold Chillin’(2000).

“On the Run” is a long, twisty heist story that Kool G Rap tells from the perspective of a low-level mob henchman, working for the Luciano crime family. Dissatisfied by what he thinks is insufficient pay for the drug running and money laundering jobs he is required to handle from day to day, he steals a shipment of 10 kg of cocaine so he can go into business for himself. His bosses catch him on the way to the airport, where he is plotting to flee town with his wife and son, but they are able to escape following a gunfight. He then drives into Mexico and stops at a filling station where he is again pursued by the Luciano family. He is able to kill his pursuers, including Don Luciano, and escapes. Complex ranked “On the Run” at #29 on their list of 50 best storytelling rap songs.

In the music video for “On the Run”, Kool G Rap & DJ Polo’s fifth and last as a duo, each scene follows and depicts the respective lyrics. 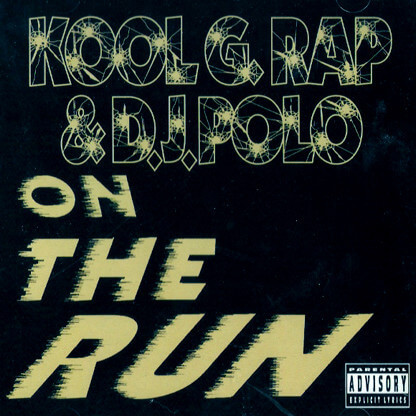