“Check Yo Self” is the second hit single from Ice Cube’s third solo album The Predator. It was released in July 1993 and features New York City rappers Das EFX.

“Check Yo Self” topped both the Billboard R&B/Hip-Hop and Rap charts while also reaching number 20 on the Hot 100 chart. The song retains two main versions, the original and a remix which utilizes the same beat as Grandmaster Flash’s “The Message”, titled “Check Yo Self (The Message Remix)”. The original mix includes a sample from the intro of The Beastie Boys’ track “The New Style”, which uses the phrase “check it” throughout the chorus.

The song is featured on Ice Cube’s Bootlegs & B-Sides album and was later released on his Greatest Hits album. The clean version of “Check Yo Self (The Message Remix)” can be found in the video game, Grand Theft Auto: San Andreas, playing on the West Coast hip hop radio station Radio Los Santos and in the soundtrack of the movie Harold & Kumar Escape from Guantanamo Bay. A new recording, based on the original version of the song, featuring Chuck D was featured in the 2010 film Due Date. In January 2010, Snoop Dogg released a cover version of the song. Guitarist Wayne Krantz included an instrumental version of the song (based on the “message remix” version) on his 2012 album Howie 61.

The music video for “Check Yo Self” uses the remix version. Similar to the video for his previous single “It Was A Good Day”, most of the scenes follow and illustrate respective lyrics of the song. The video continues where “It Was A Good Day” left off, with Ice Cube’s home being surrounded and invaded by the LAPD before he is handcuffed and taken under arrest, presumably for murder. Ice Cube is then brought to L.A. County jail where he spends the majority of the video experiencing the conflict described in the lyrics, such as disputes between cellmates and breaking up with his girlfriend. Cube also references his role in Boyz n the Hood “Oh boy, I make dough, but don’t call me Doughboy, this ain’t no f****** motion picture”. After six months pass Ice Cube is able to win over the female guard watching him who helps him break out by dressing him up in a uniform. The two make their way outside to a police cruiser and drive off into the night. (Wikipedia) 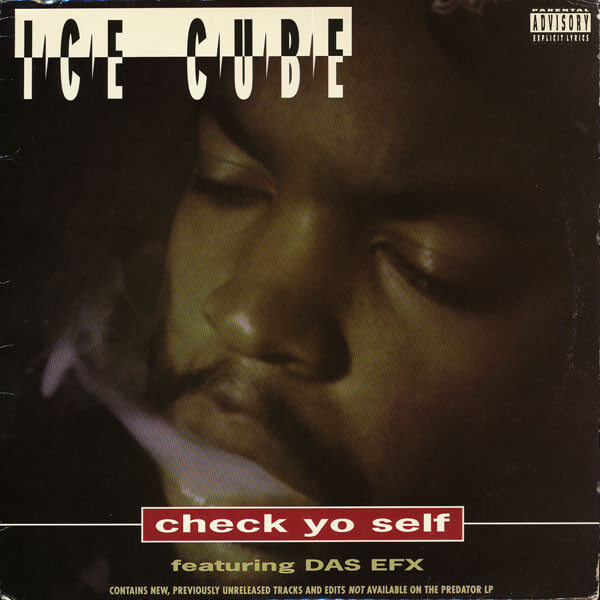