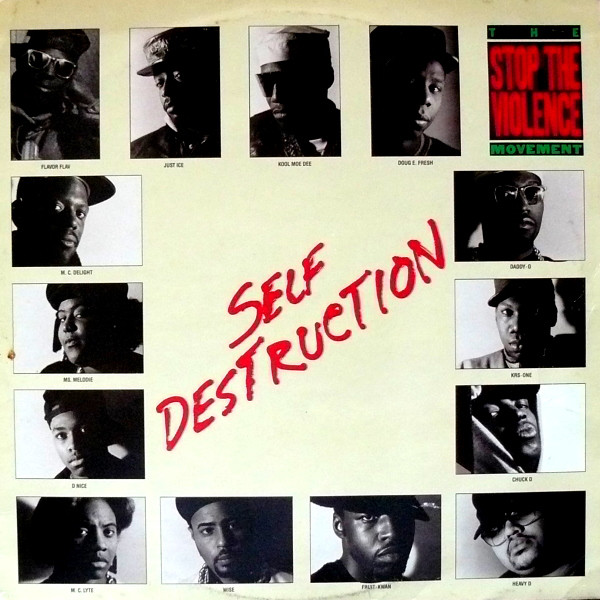 This is one of the most important songs in Hip Hop history, embodying the true spirit of Hip Hop. The Stop the Violence Movement was formed by Hip Hop icon KRS-One, after a Boogie Down Productions and Public Enemy concert where a young fan was killed in a fight. That killing occurred shortly after Scott La Rock, KRS-One’s partner in and co-founder of Boogie Down Productions, was killed in a shooting.

Galvanized into action, KRS-One founded the Stop the Violence Movement. Comprised of some of the biggest stars in East Coast Hip Hop of that time, the movement released a “Self Destruction” in 1989 – with all proceeds going to the National Urban League.

“Self Destruction” is much more than just a song – it’s a Hip Hop staple. Let’s break the song down by taking a look at the verses of all the artists involved. After the intro which contains a snippet of a Malcolm X speech, of course it’s KRS-One who opens proceedings with a classic verse to set the tone:

Well, today’s topic, self destruction
It really ain’t the rap audience that’s bugging
It’s one or two suckers, ignorant brothers
Trying to rob and steal from one another
You get caught in the mid
So to crush the stereotype here’s what we did
We got ourselves together
So that you could unite and fight for what’s right
Not negative ’cause the way we live is positive
We don’t kill our relatives

Then it’s Stetsasonic emcee Delite’s turn, with a verse to show Hip Hop was all too often unjustly used as a scapegoat:

Pop pop pop
One is shot, who’s to blame?
Headlines, front page, and rap’s the name
MC Delite here to state the bottom line
That black-on-black crime was way before our time

Up next is the legendary Kool Moe Dee with arguably the most memorable verse of the whole song:

Took a brother’s life with a knife as his wife
Cried ’cause he died a trifling death
When he left his very last breath
Was “I slept so watch your step”
Back in the sixties our brothers and sisters were hanged
How could you gang-bang?
I never ever ran from the Ku Klux Klan
And I shouldn’t have to run from a black man
‘Cause that’s… [Self Desruction….]

Fun fact: MC Lyte’s verse was co-written by LL Cool J after his appearance on the song was blocked by Def Jam, his label at that time. KRS-One elaborated on the subject in a 2012 interview with The Boombox: “The fact that LL Cool J still showed up to the session even after Def Jam told him not to. Just imagine a triple-platinum artist wanting to show up and be part of a project so bad, but he can’t because of his record company. But again LL still shows up! Can you imagine MC Lyte and LL together writing a verse for ‘Self Destruction’? Lyte was so hardcore and so much New York female Hip Hop. She was battling everybody back then. And she’s in the corner writing with a superstar like LL Cool J and they are trying to figure out how to save our children! If I was a man that cried that was my time to do it.” MC Lyte and LL Cool J’s combined effort resulted in another classic verse:

Funky fresh dressed to impress, ready to party
Money in your pocket, dying to move your body
To get inside you paid the whole ten dollars
Scotch taped with a razor blade taped to your collar
Leave the guns and the crack and the knives alone
MC Lyte’s on the microphone
Bum rushing and pushing, snatching and taxing
I cram to understand why brothers don’t be maxing
There’s only one disco, they’ll close one more
You ain’t guarding the door, so what you got a gun for?
Do you rob the rich and give to the poor?
Yo Daddy-O, school em some more

Next up a tag-team rhyme by Daddy-O and Wise from Stetsasonic telling people about the eventual consequences of doing crime:

Straight from the mouth of Wise and Daddy-O
Do a crime, end up in jail and gotta go
‘Cause you could do crime and get paid today
And tomorrow you’re behind bars in the worst way
Far from your family, ’cause you’re locked away
Now tell me, do you really think crime pays?
Scheming on taking what your brother had?
(You little sucker) you’re talkin’ all that jazz

Young Boogie Down Production member D-Nice – who shared production responsibilities for the song with KRS One and Bomb Squad’s Hank Shocklee – drops a verse that is as relevant today as it was back then:

It’s time to stand together in a unity
‘Cause if not then we’re soon to be
Self-destroyed, unemployed
The rap race will be lost without a trace
Or a clue but what to do
Is stop the violence and kick the science
Down the road that we call eternity
Where knowledge is formed and you’ll learn to be
Self-sufficient, independent
To teach to each is what rap intended
But society wants to invade
So do not walk this path they laid
It’s… [Self Desruction….] 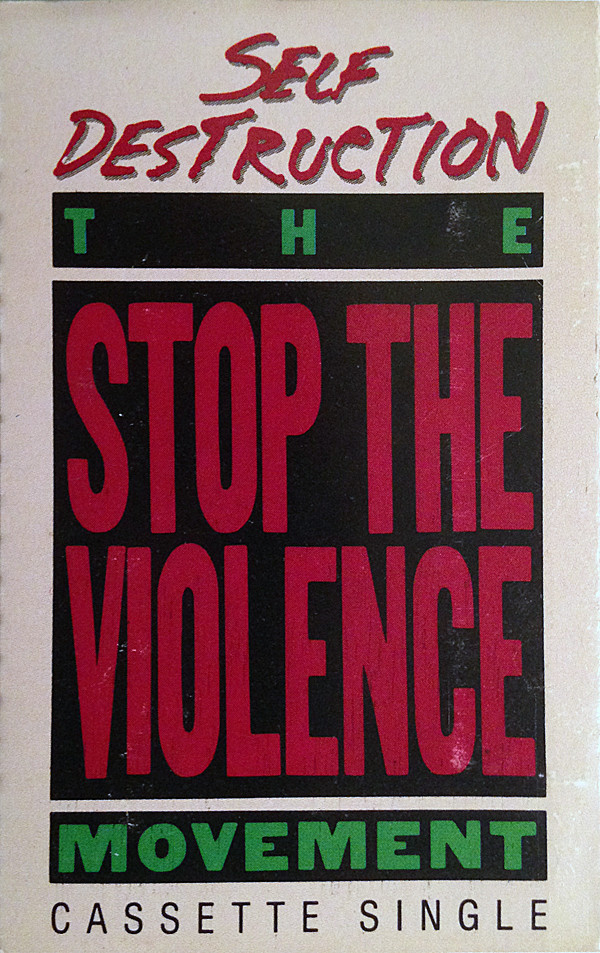 Up next is the late Ms. Melodie with a poignant verse:

I’m Ms. Melodie and I’m a born again rebel
The violence in rap must cease and seckle
If we want to develop and grow to another level
We can’t be guinea pigs for the devil
The enemy knows, they’re no fools
Because everyone knows that hip-hop rules
So we gotta get a grip and grab what’s wrong
The opposition is weak and rap is strong

This is all about, no doubt, to stop violence
But first let’s have a moment of silence
*Fresh beatboxes*… swing
Things been stated re-educated, evaluated
Thoughts of the past have faded
The only thing left is the memories of our belated
And I hate it, when
Someone dies and gets all hurt up
For a silly gold chain by a chump (Word up)
It doesn’t make you a big man (And)
To want to go out and dis your brother man (And)
You don’t know that’s part of the plan (Why?)
‘Cause rap music is in full demand
Understand [Self Destruction…]

Do you remember Just Ice? The man responsible for one of HHGA’s favorite tracks of all-time drops some rhymes leading up to one of the best verses of the song:

My name is Just-Ice — a man, not a prankster
I was known as the gangster
But believe me that is no fun
The time is now to unite everyone
You don’t have to be soft to be for peace
Robbing and killing and murdering is the least
You don’t have to be chained by the beast
But party people it’s time I release!

The late Heavy D was a big name at the time and does one of the centerpiece verses of the song, one people forever should take heed of:

Ayo here’s the situation: idiodicy
Nonsense, violence, not a good policy
Therefore we must ignore, fighting and fussing
Heavy’s at the door so there’ll be no bum-rushing
Let’s get together or we’ll be falling apart
I heard a brother shot another, it broke my heart
I don’t understand the difficulty, people
Love your brother, treat him as an equal
They call us animals — mmm mmm, I don’t agree with them
I’ll prove them wrong, but right is what your proving them
Take heed before I lead to what I’m saying
Or we’ll all be on our knees, praying

Stetsasonic’s Frukwan (who would later be part of The Gravediggaz) takes over from Heavy D:

Yo Heavy D, deep in the heart of the matter
The self-destruction is served on a platter
Making a day not failing to anticipate
They got greedy so they fell for the bait
That makes them a victim, picked then plucked
New jack in jail, but to the vets they’re a duck
There’s no one to rob, ’cause in jail you’re a number
They never took the time to wonder about [Self Destruction…]

Closing out the song are Chuck D and Flavor Flav doing a verse with that typical Public Enemy power:

Yes, we urge to merge, we live for the love of our people
The hope: they get along (Yeah, so we did a song)
Getting the point to our brothers and sisters
Who don’t know the time (Boyyyee, so we wrote a rhyme)
Instead in your head, you know, our job
To build and collect ourselves with intellect (Come on)
To revolve, to evolve to self-respect
‘Cause we got to keep ourselves in check
Or else it’s… [Self Destruction]