Born in Canada to Jamaican immigrant parents and raised in Texas, Wally Rudolph smoked marijuana for the first time at the age of fourteen. The joint, rolled from the Book of Revelations of a pocket-sized bible, was the start of a fifteen year affair with illicit drugs that had him drop out of college and took him back and forth across the American Midwest. Along the way he studied fiction and poetry with Jack Butler, Pulitzer finalist for Living in Little Rock with Miss Little Rock, and Walt Whitman Award Winner and former NEA fellow, Greg Glazner.

As an actor, he has appeared in numerous films and TV shows, including Street Kings, Bang Bang, and most recently, Sons of Anarchy and Hawaii 5-0.

He currently resides with his family in Los Angeles. 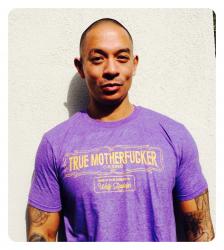 Fanning the Pain – The Price of Appropriation

Fanning the Pain The Price of Appropriation Last year at about this time – actually a month earlier in July of 2014 – Spike Lee tweeted a link to a cell phone video of a city street in Staten Island, New York. From my home in Los Angeles, I clicked on the link unsure of […]