Gabriel Bogart was born the day of the evacuation of Saigon, at the very tail end of the Vietnam War. Luckily, this afforded him the luxury of growing up in the first generation of Hip Hop fans and B-Boys, breakdancing his way through 5th grade like a drunken worm.

The first Rap album he ever owned on cassette was Eric B. & Rakim’s Paid In Full. When he turned 14, his sister gave him Public Enemy’s Fear of a Black Planet on CD and he memorized it in under a week. Despite growing up in the Pacific Northwest, he always felt a deeper affinity for East Coast Hip Hop over West Coast. During his decade-long tenure working in record stores, he was once pulled into a touring van by Del the Funkee Homosapien and the rest of the Heiro crew and smoked out with a monumental blunt. He also was blessed enough to hug Queen Latifah. 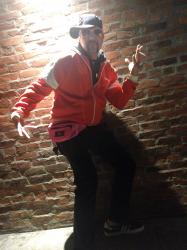 That Time I Slept On The Wu-Tang Clan

So, we’re a few days late, but this post can be viewed as a celebration of the 25th anniversary of the release of the Wu-Tang Clan’s Enter the Wu-Tang (36 Chambers). It was unleashed on the earholes of the world November 9th, 1993. In some senses, it remains an enigma, an album that contains an […]