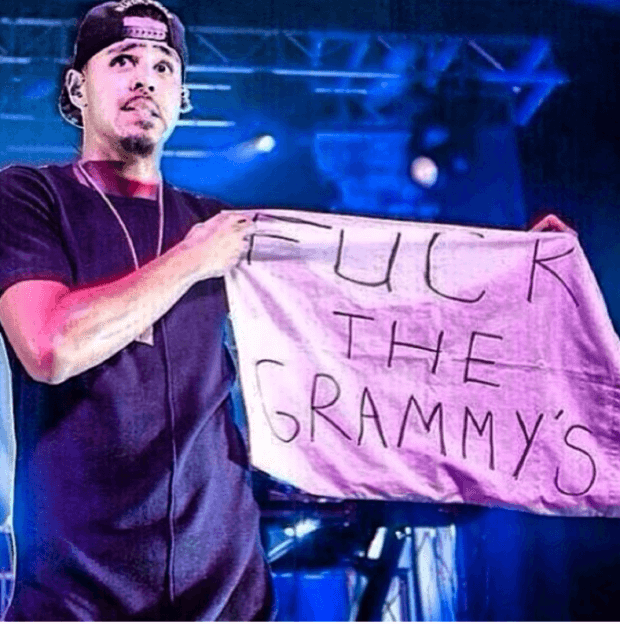 Much like the NBA, the Grammys have a complicated relationship with Hip Hop. Decisions like Young MC’s “Bust a Move” winning over Public Enemy’s “Fight the Power” have led many to believe that those who vote on the Grammys have no clue about real Hip Hop.

That argument has merit, evidenced by the fact that the genre was not even acknowledged by the award show until 1989 and, even then, it was under the very wide umbrella of Best Rap Performance, a category that recognized merely a single song.

The Grammy for Best Rap Album has been awarded twenty-one times. There have been three artists that have won it multiple times: Eminem- 6; Kanye West – 4; and Outkast – 2. Only two of Kanye’s solo albums have not won the award – 808s & Heartbreak and Yeezus, although the latter was nominated. Every major label solo Eminem album has snagged a nomination, with Encore being the only one not to win. Jay-Z has a total of 21 Grammys, but has won the award for Best Rap Album only once. Nas has never won a Grammy. Ever.

So I decided to rank all of the Best Rap Album winners on their own merits while also studying if there was a more deserving album that year.

Other nominees: 2Pac – Me Against the World; Bone Thugs-n-Harmony – E. 1999 Eternal; Ol’ Dirty Bastard – Return to the 36 Chambers: The Dirty Version; Skee-Lo – I Wish

What should have won: Me Against the World

It was the first year for this award and it’s clear that the committee was confused. What a wacky group of nominees. Where else could you find 2Pac, Wu-Tang, and Skee-Lo grouped together? I find it disheartening (though not surprising) that of the three solo Wu albums released in 1995, the weakest one was nominated. The best four albums of the year were snubbed and while I love Naughty by Nature and Poverty’s Paradise is a fine album, it doesn’t come close to Me Against the World.

What should have won: Food & Liquor

A relatively weak field combined with Luda’s determination to win a Grammy with a more mature album led to Release Therapy‘s win, even though it is near the bottom of Luda’s discography. I even wrote a post for XXL about how Luda’s mixtape, Pre-Release Therapy, was a far better project than the album it was promoting. This was the first of four nominations in this category for Lupe and he probably deserved the win here.

What should have won: Good Kid, M.A.A.D. City

The choice that launched a thousand think pieces. Everyone felt that Macklemore had robbed Kendrick Lamar and his clumsy actions afterwards didn’t help matters. But Macklemore has been around for years, honing his craft. He is not Vanilla Ice 2.0 and The Heist is not To the Extreme 2. In fact, it’s a top notch album, but Good Kid, M.A.A.D. City is a revelation, one of the very few Hip Hop concept albums that actually delivers on its promise and gets better with each listen.

What should have won: How I Got Over

Another Eminem album, another Grammy for Best Rap Album. This time, he found what has become his new formula: an album of stadium anthems with call-and-response choruses alongside triple-time rhymes over a sampled ’80s power ballad with a R&B songstress on the hook. Parts of Recovery are great – “Cold Wind Blows,” “Cinderalla Man,” “Almost Famous” – but How I Got Over is great in its entirety. It is one of the best entries in the Roots’ impressive catalog, a short but potent mixture of Hip Hop, R&B and indie rock.

What should have won: Life is Good

What should have won: The Renaissance

Full disclosure: I love Relapse so much that I wrote a passionate essay defending it in my latest book. But I’m determined to be objective and Q-Tip’s first album in nine years was a welcome surprise. When we learned that Tip would be releasing a solo album in 1999, The Renaissance is what we had in mind. We had to wait almost a decade, but we finally got it.

What should have won: Oxymoron

After what had happened the previous year, people were ready to riot if Iggy Azalea were to win. She did not, but Eminem did. Again. The Marshall Mathers LP 2 was not a bad choice – it’s Em’s best album since his comeback, but it’s still spotty in places. Oxymoron is not a perfect album either, but it’s a very solid project and choosing it would have proven the Grammy voters to be more than just a bunch of people that vote for popular albums by well-known artists.

Other nominees: 50 Cent – Get Rich or Die Tryin’; Missy Elliott – Under Construction; Jay-Z: The Blueprint 2: The Gift & The Curse; The Roots – Phrenology

What should have won: Get Rich or Die Tryin’

An album of halves. It’s an Outkast album, but not really. It’s half-rap and half-everything else. It was enormously popular and successful, but be honest: when was the last time you listened to it? In comparison, 50 Cent’s debut changed Hip Hop forever and launched the career of a superstar.

What should have won: Things Fall Apart

Eminem is a genius, but his Aftermath debut is a bit schizophrenic. It wouldn’t be until his next album that he learned how to put it all together. The Roots, on the other hand, took their life experiences growing up in Philly and traveling around the globe performing, channeled it through their instruments, and dropped an absolute gem that sounded like the best of what Hip Hop had to offer while also sounding like nothing else. This was their first of five losses in the category.

What should have won: American Gangster

Tha Carter III was Lil Wayne at his apex. After multiple delays, it still sold a million copies in the first week and while I think Tha Carter II was better, it still featured a Wayne that could perform verbal gymnastics and make nonsense sound brilliant. It’s not an egregious choice by any means, but I think time will be kinder to American Gangster. By far the best Jay-Z solo post-retirement album, it sits just a step below his greatest works. It is a lean project with Jay unleashing verbal wizardry through a loosely connected story thread over lush backdrops. The fact that its predecessor was Kingdom Come makes it even more impressive.

What should have won: All Eyez on Me

The Score is a very good album. Wyclef’s talent is clear throughout and Lauryn Hill’s performance is that of a superstar breaking out. But it sounds dated in parts. Meanwhile, All Eyez on Me changed Hip Hop, for better and for worse, as ‘Pac took control of the culture and did his best to ignite a war with his ferocity and arrogance over two discs.

What should have won: Wu-Tang Forever

Before Kanye West and Taylor Swift, there was Ol’ Dirty Bastard and Shawn Colvin. After Puff won the award over both, ODB jumped on stage to announce that “Puffy is good, but Wu-Tang is the best!” No Way Out is a good album that had some classic songs – “Victory,” “Young G’s,” “All About the Benjamins” – but it did not have the power or ambition of either Wu-Tang Forever or Life After Death. For what it’s worth, Charlamagne agrees with me.

What should have won: Vol. 2…Hard Knock Life

After the murders of 2Pac and The Notorious B.I.G., there was a void at the top of the game and Jay-Z made the most of his opportunity. Vol. 2… was the album that catapulted him to superstardom, selling more than five million copies and becoming the lone album that gave Jigga a Grammy in the category.

What should have won: To Pimp a Butterfly

An instant classic, To Pimp a Butterfly is a deep, ambitious, complex album, the sort that is not often found in modern Hip Hop. There was really no other decision and the often-maligned Grammy voters got this one right. 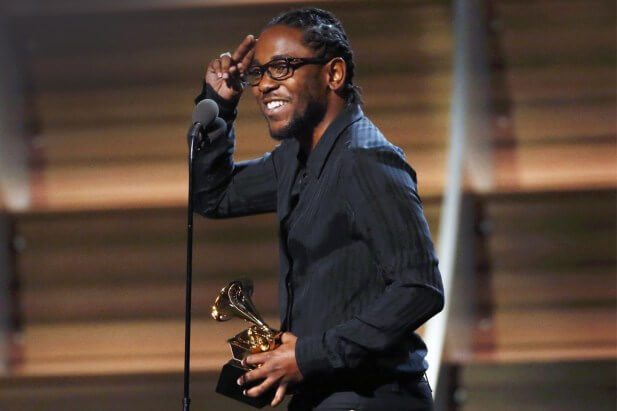 What should have won: The Marshall Mathers LP

Determined to avoid the sophomore jinx and armed with angry responses to everyone that dared to voice a negative opinion about him over the previous year, Eminem crafted a brutal, beautiful project that proved he was more than a one-hit wonder or a TRL pop act. Some may believe that 2001 deserved to win, but that album’s production and its hits – “Still D.R.E.,” “The Next Episode” – helped to obscure the fact that the second half of that album is pretty weak, particularly in hindsight. There have been times when Em has won a Grammy without the strongest album in the field, but this was not one of them.

Other nominees: 50 Cent – The Massacre; Common – Be; Missy Elliott – The Cookbook; Eminem – Encore

What should have won: Late Registration

Late Registration is the last version of Kanye before he became something else. It is ambitious without being in love with its own ambition, featuring great songs, great lines, and great guest spots. It’s a bit too long, but still far better than its competition. Not even those Em stans at the Grammys could argue in favor of Encore.

What should have won: The College Dropout

A Hip Hop artist unlike any we had ever seen released an album unlike anything we had ever heard. It’s funny and heartfelt, honest yet optimistic. The Black Album is great (even with “Justify My Thug”), but in its sprawl, The College Dropout is able to show its uniqueness and creativity.

What should have won: The Eminem Show

A very weak field combined with probably Em’s best album made this a no-brainer. 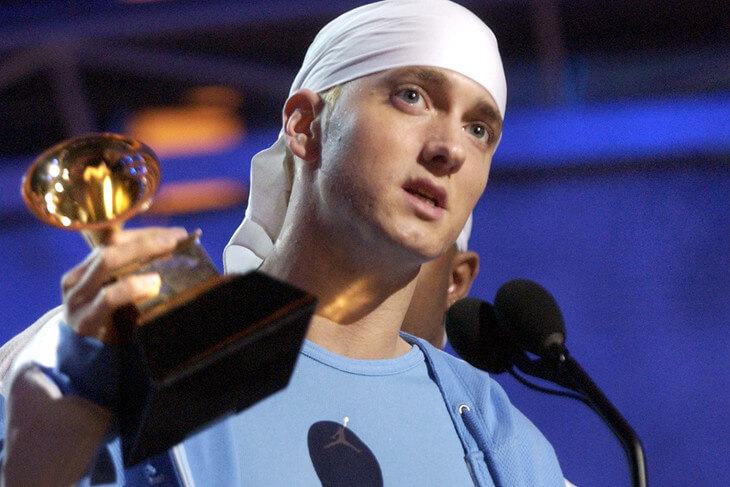 Other nominees: Eve – Scorpion; Ja Rule – Pain is Love; Jay-Z – The Blueprint; Ludacris – Back for the First Time

What should have won: The Blueprint

Stankonia is a great album. It is a complete, fully realized project with several classic singles – “So Fresh, So Clean,” “Ms. Jackson,” “B.O.B.” It is one of the best albums to ever win this award…but it’s still not as good or as important as The Blueprint. Jay-Z’s magnum opus, with its use of ’70s soul samples, classic diss track (“The Takeover”), and legendary lone guest appearance (Eminem on “Renegade”), was a high point for the game’s biggest artist and lived up to its title by setting the foundation of the sound of the genre for the next few years.

What should have won: Graduation

If you ever need proof that the Grammy selection process for Best Rap Album is determined by commercially relevant songs and well-known artists, look no further than the list of nominees from 2008. Three stars – Jay-Z, Nas, and T.I. – were nominated for projects that ranged from wack to super wack. Fortunately, Kanye had unleashed one of his best, the album on which he pivoted from rap star to music star. It has a song for every mood and locale – “Can’t Tell Me Nothing,” “Stronger,” “Champion,” “Good Life” – and proved that Kanye was still getting better.

What should have won: My Beautiful Dark Twisted Fantasy

The best album by the most important artist of the century, My Beautiful Dark Twisted Fantasy is a masterpiece. No one is making albums like this – not even Kanye. Even for a group as out-of-touch as Grammy voters, this choice was clear.