“And by doing this we'll go real far, because 2 Live is what we are” 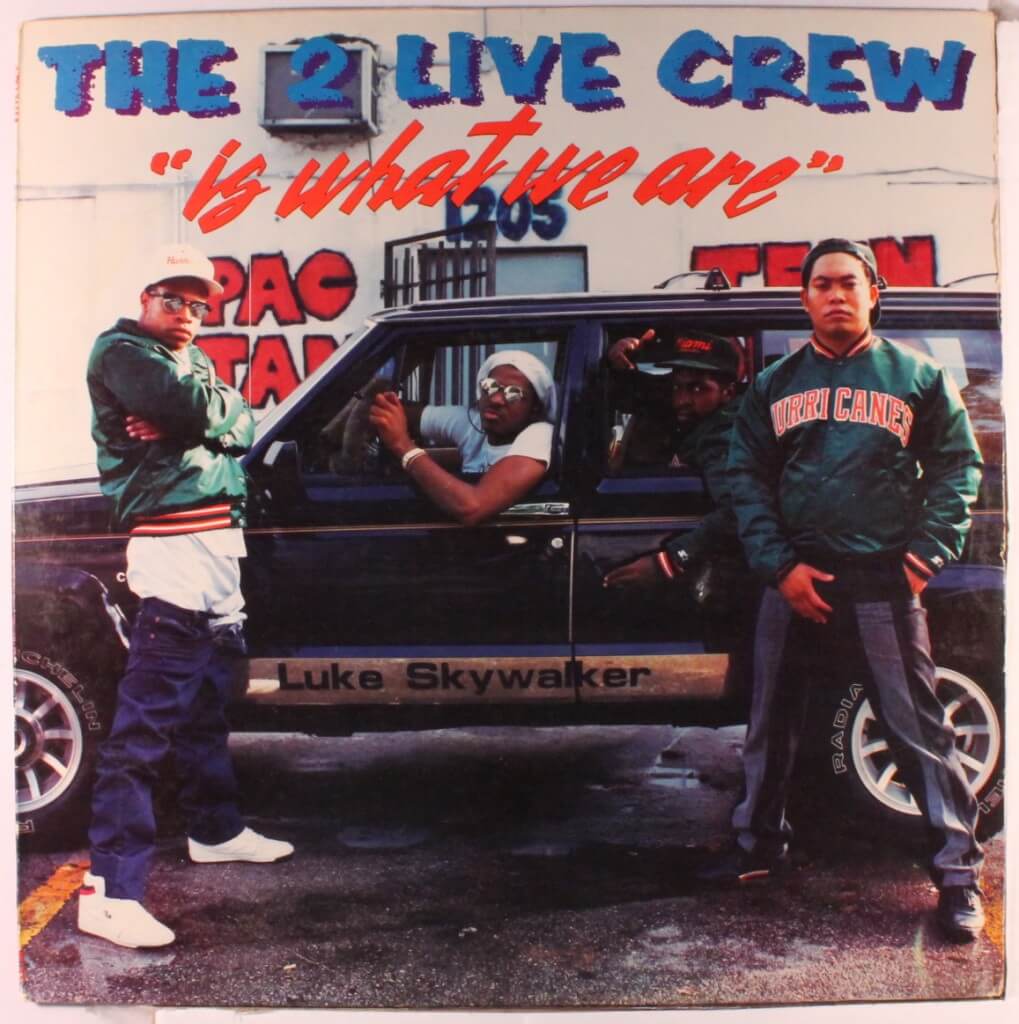 The 2 Live Crew’s debut album, The 2 Live Crew Is What We Are, was released in 1986. Alex Henderson of Allmusic commented that the album “did take sexually explicit rap lyrics to a new level of nastiness”, with tracks such as “We Want Some Pussy” and “Throw the ‘D'”. With word-of-mouth attention, the album was certified gold by the Recording Industry Association of America (RIAA). Bob Rosenberg of Will to Power remixed “Beat Box” (originally released as “Two Live”) and was billed “King of Edits” by Luke Skywalker. In 1987, a Florida store clerk was acquitted of felony charges for selling the album to a 14-year-old girl.

Move Somethin’ is 2 Live Crew’s second album. The album was released in 1988. It was also certified Gold and featured the singles “Move Somethin'” and “Do Wah Diddy Diddy”. The album improved on the charts from the previous album, making in to #68 on the Billboard 200 and #20 on the Top R&B/Hip Hop Albums chart. 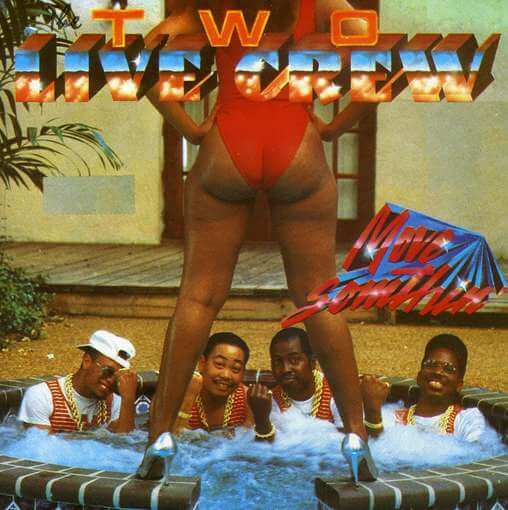 Campbell decided to sell a separate clean version in addition to the explicit version of the next album, Move Somethin’ (1988), produced by Mr. Mixx. A record store clerk in Alexander City, Alabama, was cited for selling a copy to an undercover police officer in 1988. It was the first time in the United States that a record store owner was held liable for obscenity over music. The charges were dropped after a jury found the record store not guilty.

In 1989, the group released their album, As Nasty As They Wanna Be, which also became the group’s most successful album. A large part of its success was due to the single “Me So Horny”, which was popular locally with heavy radio rotation on Miami’s WPOW-Power 96 FM. The American Family Association (AFA) did not think the presence of a “Parental Advisory” sticker was enough to adequately warn listeners of what was inside the case. Jack Thompson, a lawyer affiliated with the AFA, met with Florida Governor Bob Martinez and convinced him to look into the album to see if it met the legal classification of obscenity.  In 1990 action was taken at the local level and Nick Navarro, Broward County sheriff, received a ruling from County Circuit Court judge Mel Grossman that probable cause for obscenity violations existed. In response, Luther Campbell maintained that people should focus on issues relating to hunger and poverty rather than on the lyrical content of their music. 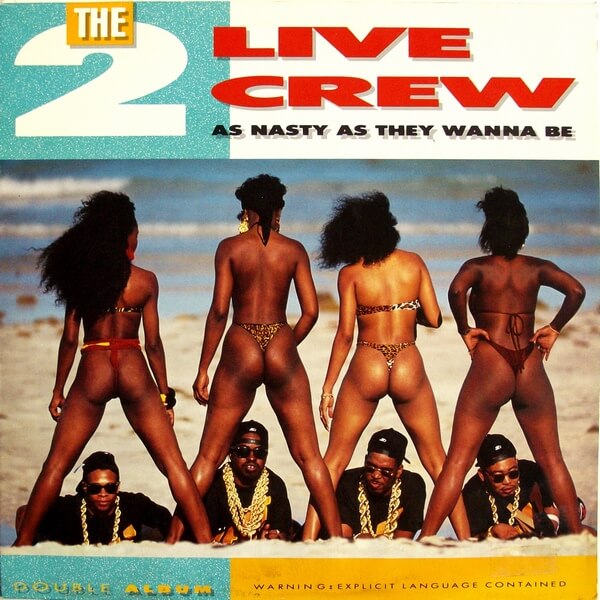 Navarro warned record store owners that selling the album might be prosecutable. The 2 Live Crew then filed a suit against Navarro. That June, U.S. district court Judge Jose Gonzalez ruled the album obscene and illegal to sell. Charles Freeman, a local retailer, was arrested two days later, after selling a copy to an undercover police officer. This was followed by the arrest of three members of The 2 Live Crew after they performed the As Nasty As They Wanna Be album at Club Futura in Hollywood, Florida hosted by radio personality Tony the Tiger (Ira Wolf) from Power 96 FM; one of the few radio stations in the U.S. that continued airplay while the trial ensued. After international exposure with support from freedom of speech advocates like SCREW magazine’s Al Goldstein and many others, they were acquitted soon after, as professor Henry Louis Gates, Jr. testified at their trial in defense of their lyrics. Freeman’s conviction was overturned on appeal as well.

“A lot of people have gotten the impression that I’m this rude sexual deviant or something,” Campbell told journalist Chuck Philips. “But contrary to what has been printed about me in the papers, I’m no moral threat to anybody. I’m just a hard-working guy marketing a new product.”

In 1992, the United States Court of Appeals for the Eleventh Circuit overturned the obscenity ruling from Judge Gonzalez, and the Supreme Court of the United States refused to hear Broward County’s appeal. As in the Freeman case, Gates testified on behalf of The 2 Live Crew, arguing that the material that the county alleged was profane actually had important roots in African-American vernacular, games, and literary traditions and should be protected.

As a result of the controversy, As Nasty As They Wanna Be remained brisk, selling over two million copies. It peaked at number 29 on the Billboard 200 and number 3 on the Top R&B/Hip-Hop Albums chart. A few other retailers were later arrested for selling it as well, including Canadian Marc Emery, who was convicted in Ontario in 1991, and would later gain fame as a marijuana activist. Later hard-rock band Van Halen sued over an uncleared sample of their song “Ain’t Talkin’ ‘Bout Love” in the 2 Live Crew song “The F*** Shop”. The publicity then continued when George Lucas, owner of the Star Wars universe, successfully sued Campbell for appropriating the name “Skywalker” for his record label, Luke Skyywalker Records. Campbell changed his stage name to Luke (and changed the record label’s name to Luke Records) and the group released an extremely political follow-up album, Banned in the U.S.A., after obtaining permission to use an interpolation of Bruce Springsteen’s Born in the U.S.A. The 2 Live Crew paraphernalia with the Luke Skyywalker or Skyywalker logos are often sought-after collector’s items.

Banned in the U.S.A. is the fourth album by the 2 Live Crew. It was originally credited as Luke’s solo album. The certified Gold album included the hits “Do the Bart” and the title track. It was also the very first release to bear the RIAA-standard Parental Advisory warning sticker.

The eponymous title single is a reference to the decision in a court case that its album As Nasty As They Wanna Be was obscene (the decision would later be overturned on appeal). Bruce Springsteen granted the group permission to interpolate his song “Born in the U.S.A.” for it.

Displeased over the decision of Florida Governor Bob Martinez who, on being asked to examine the album, decided it was obscene and recommended local law enforcement take action against it and over the subsequent action of Broward County, Florida, sheriff Nick Navarro, who arrested local record-store owners on obscenity charges for selling the group’s albums and the subsequent arrest of members of the group on obscenity charges, the group included the song “F*** Martinez”, which also includes multiple repetitions of the phrase “f*** Navarro”. The group found two other men with the same names, and had them sign releases, as they thought that this action would make it impossible for Martinez or Navarro to sue them.

Live in Concert is the fifth album by rap group, 2 Live Crew. This was 2 Live Crew’s first and only Live album, and was also the only 2 Live Crew release under the Effect subsidiary label of Luke Records, a move that was deemed necessary for the company to be able to release additional 2 Live Crew material outside of their distribution deal with Atlantic Records, which was signed in 1990 – the same year they released Banned In The U.S.A.. 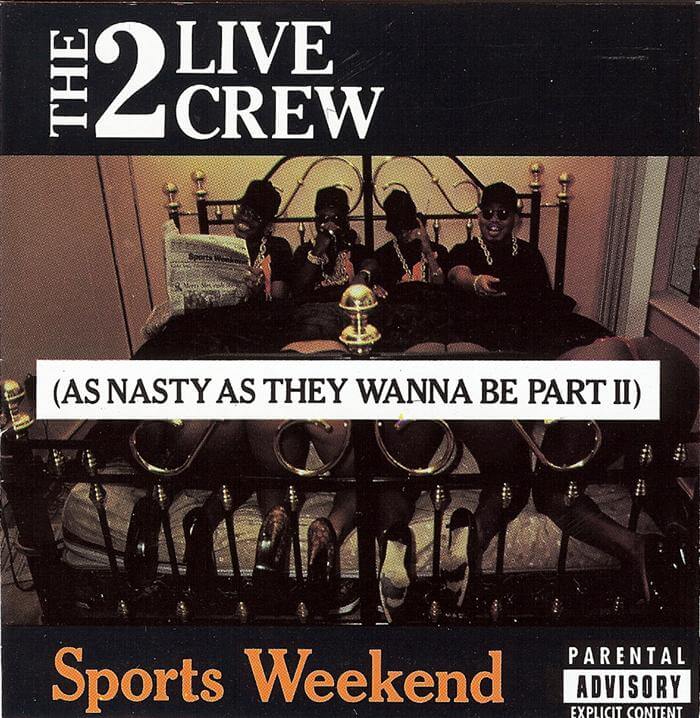 Deal with This is the seventh album released by rap group, 2 Live Crew. It was released independently on January 20, 1993 for Macola Records and was entirely produced by Mr. Mixx. Only Fresh Kid Ice and Mr. Mixx appeared on the album and used the alias, Rock On Crew for half the songs on the album. The tracks that appeared on this album were unreleased songs that Fresh Kid Ice and Mr. Mixx had recorded before Brother Marquis and Luke Skyywalker joined the group.

Back at Your A** for the Nine-4 is the eight studio album released by rap group 2 Live Crew. It was released on June 8, 1994 for Luke Records and was produced by Mike Fresh, DJ Slice, Professor Griff, DJ Spin Felix Sama & DJ Laz. The album became a moderate hit, peaking at #52 on the Billboard 200 and #9 on the Top R&B/Hip-Hop Albums, as well as producing two charting singles, “Hell, Yeah” and “You Go Girl”. For this album the group was billed as the new 2 Live Crew as Brother Marquis and Mr. Mixx had left the group, the line-up for this album was Fresh Kid Ice, Luke and new member, Verb. It would be the last 2 Live Crew album with Luke.

The Original 2 Live Crew is the ninth 2 Live Crew album and a compilation album of rare and unreleased material by the rap group. It was released on May 16, 1995 by Blue Dolphin Entertainment and was produced by Lee DJ Flash Johnson. The album was similar to the groups album, Deal with This as both contained rare songs from the groups early days.

Shake a Lil’ Somethin’ is the tenth album released by rap group 2 Live Crew. It was released on August 6, 1996 for Lil’ Joe Records and was produced by Mr. Mixx. The album would make it to #145 on the Billboard 200 and #33 on the Top R&B/Hip-Hop Albums and two singles “Shake a Lil’ Somethin'”, which made it to #11 on the Hot Rap Singles chart and “Do the Damn Thing”, which made it to #24 on the same chart. At the time of this album, Fresh Kid Ice had left the New 2 Live Crew (which consisted of himself, Luke and Verb and Luke Records) to re-join original members Mr. Mixx and Brother Marquis. However, the reunion would be short lived as Mr. Mixx would leave the group after this album.

The Real One is the eleventh and last studio album released by rap group, 2 Live Crew. It was released on April 7, 1998 for Lil’ Joe Records and with the absence of Mr. Mixx, was produced by various producers. The album peaked at #59 on the Top R&B/Hip-Hop Albums. Shortly after the release of this album, Brother Marquis left as well.

In 1998, Brother Marquis became a born-again Christian, quit the group, and began devoting himself to combating what he saw as the “evils” that he as a member of the 2 Live Crew portrayed and glorified. Rapper “First Degree” aka Tiki was then recruited as the groups newest addition by Fresh Kid Ice. However, his attempt was only for a duration of a few years. Fresh Kid Ice was for the most part a solo act using the name of the 2 Live Crew until 2004.

In May 2010, it was announced that the duo’s album, “Just Wanna Be Heard”, would feature production from Mannie Fresh and was to be released on Nu Focuz Entertainment/Lil’ Joe Records with guest verses from Too Short, E-40, and Insane Clown Posse. It was set to be released in August 2010, but remains unreleased.